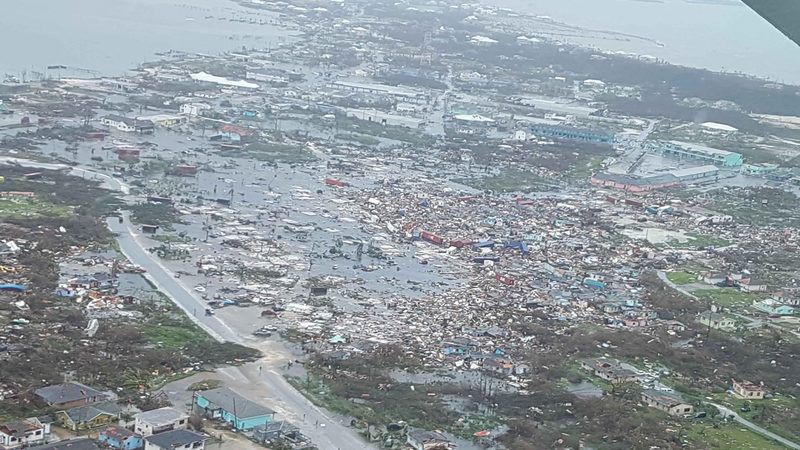 The Abaco Islands on Tuesday, which were directly hit by a catastrophic Category 5 Hurricane Dorian. (Terran Knowles/Our News Bahamas)

ORLANDO, Fla. — Everything leveled and total devastation — those are the words being used to describe the Bahamas after Hurricane Dorian barreled through.

Bahamian Health Minister Duane Sands announced Wednesday evening that the death toll on the islands from Hurricane Dorian has risen to 20, and that more fatalities are expected. Seventeen victims are from the Abaco islands and three from Grand Bahama.

In at least one estimate, nearly half of the homes in Abaco and Grand Bahama were destroyed or severely damaged.

Tracy Tarless, a mother of two, lives in Freeport, Grand Bahama, and described the terrifying moments that she and family spent trying to escape the flood waters.

In a Facebook call, Tarless said she and her family knew early on that they would need to prepare for Hurricane Dorian — and they did.

But Tarless told Spectrum News they had no idea the storm was going to cause catastrophic damage.

Tarless, her 4-year-old and 5-year-old, her grandmother and her fiance's mother dashed to a nearby church when the water started coming up past their porch, but Hurricane Dorian's rising waters followed them.

She says they along with about 100 others eventually had to get to higher ground again. Her family was able to get a boat ride to safety.

Tarless told us she can't imagine what her home looks like and how they'll rebuild, but she's grateful her family survived.

"I had to be strong for my babies," she said.

People in Central Florida are mourning over the devastation left behind in the Bahamas after Hurricane Dorian ravaged the islands.

Bianca Becker, who lives in Orlando, lost her home on Abaco. The island is where she said she made some of her favorite memories, including the place she got engaged. She said she was heartbroken when she saw what Hurricane Dorian did to the island she loved.

The Red Cross estimates Hurricane Dorian destroyed more than 13,000 homes on the islands. So far, Prime Minister of the Bahamas Hubert Minnis confirmed there are seven Hurricane Dorian-related deaths, including an 8-year-old boy. It’s a number Minnis said is expected to rise.

“It’s hard to recognize what you’re looking at, and once you realize what it is, it’s heartbreaking, because it’s completely different,” Becker said. “It’s complete devastation.”

Lia Head-Rigby has been in Orlando for three years, but she still has loved ones in the Bahamas, so the devastation was personal.

She did a flyover Tuesday over the Bahamas and said, “I saw skeletons of houses. I saw thousands upon thousands of boats all piled up.”

Lia Head-Rigby is the founder of the Head Knowles Foundation, a hurricane relief foundation, and they're working to get supplies shipped by boat and air to the Bahamas, along with sending medics.

Bianca Becker and her father are working with several GoFundMe pages approved by Hope Town Volunteer Fire and Rescue, a volunteer fire department in Abaco, including Matt Winslow's GoFundMe, to collect much needed supplies and money to help those in the Bahamas.

Becker said her father plans to deliver those donations himself using his plane once the runway is clear of floodwater.

“I don’t know if they’ve ever gone with anything this bad before, but any time there’s been anything, we’ve gotten together, and we’ve gotten it done,” she said.

Elsewhere, according to Air Mobile Ministries, they are planning on bringing water purification systems to Abaco.

Joe Hurston said him and his team drove to Tennessee to go pick up a Cessna Caravan. As soon as it's safe to fly, they will be dropping off medical supplies to Haiti, then heading to the Abaco Islands. He says they can also help do medical evacuations if necessary.

The nonprofit is asking for public donations to help fund the water purifiers, because each one costs $2,500 but lasts more than 14 years.

Orlando woman Cindy Kuck, who runs Regal Boats with family near the Orlando International Airport, is collecting supplies that will head to the Bahamas, where rescue missions are also taking place.

“We have two helicopters and an airplane that have been over there today, doing rescue missions and getting people from Abacos into Nasau also into North Eleuthera," Kuck said.

On Wednesday morning, the Salvation Army stated it is already on the ground in the Bahamas and providing relief to those impacted by the storm.

Capt. Ken Chapman of the Orlando Area Command of the Salvation Army stated in a news release that the organization is still accepting donations.

"We are accepting cash donations now to provide supplies for that relief. In kind donations would be very difficult to get over there at this time, so cash donations will enable us to help," he stated.

The federal government is also sending aid to The Bahamas.

The Office of Foreign Disaster Assistance tweeted a picture of 32 tons of relief supplies going to The Bahamas to aid the recovery, including plastic sheeting, hygiene kits and water containers.

ON ITS WAY: Nearly 32 metric tons of @USAID relief supplies like plastic sheeting, hygiene kits & 💧containers are en route to The #Bahamas from our warehouse in #Miami to help ppl affected by #HurricaneDorian. These supplies will be distributed to people in need by @nemabahamas pic.twitter.com/KkcB3mTMH3

The cruise companies are also getting involved.

Royal Caribbean says it will commit $1 million to disaster relief, and are loading generators, water, cleaning supplies, sheets, towels and more onto cruise ships to send to The Bahamas.

The Bahamas has been part of our family for nearly 5 decades. Our thoughts & support are with them during this difficult time. As part of our Dorian disaster relief efforts, we’re committing $1M to help them rebuild. To join the cause, please visit: https://t.co/ysuDfFL4oD pic.twitter.com/aJ5qL7Nb8g

Additionally, Royal Caribbean says it will match dollar for dollar any donations by guests and employees that are made to the Pan American Development Foundation to aid relief efforts.

The Walt Disney Company has also committed $1 million to non-profit relief agencies, and will help provide supplies like food and construction materials to impacted areas.

The Walt Disney Company, led by Disney Cruise Line, has committed more than $1 million in cash and in-kind support to help relief and recovery efforts for those in The Bahamas affected by Hurricane Dorian. Read more: https://t.co/MzCdxfW0TO pic.twitter.com/4UWoslMP5f