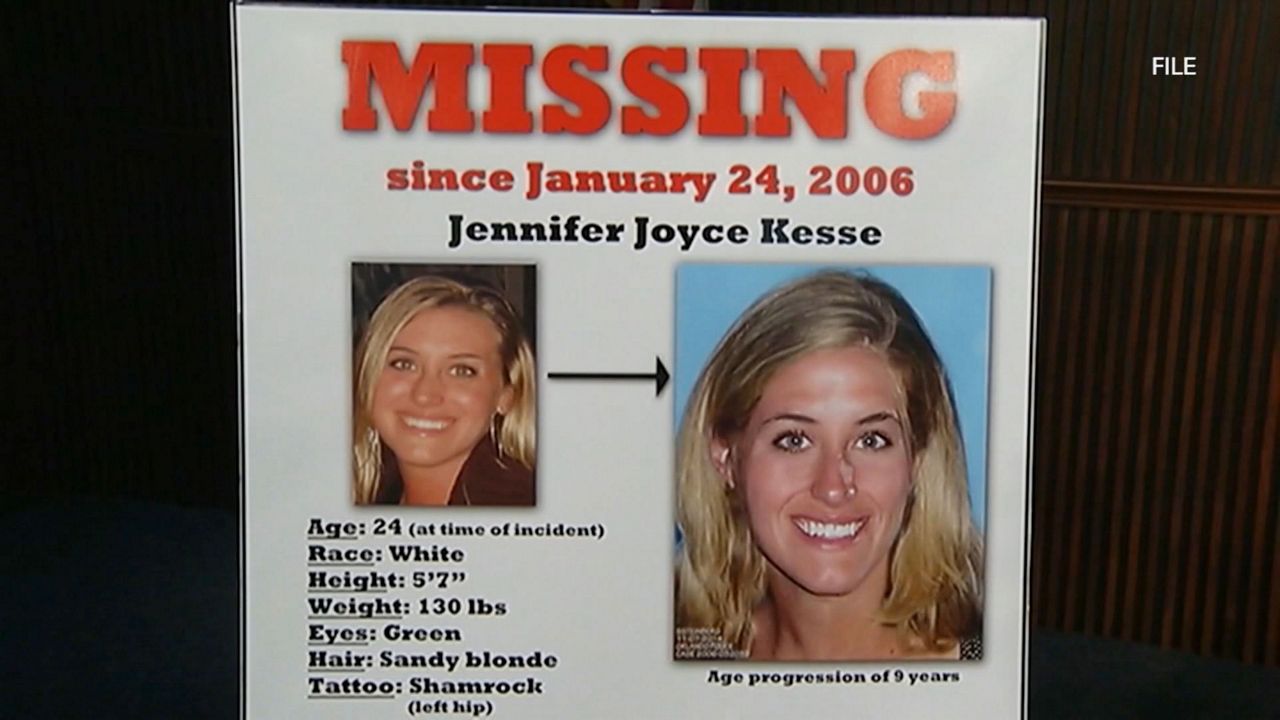 A missing poster of Jennifer Kesse from 2015 shows and age progression photo. (File)

ORLANDO, Fla. —  Forging their own path, the parents of Jennifer Kesse are now using newly-released police records to launch their own investigation into their daughter’s 2006 disappearance, and they are sharing what they are learning from those files.

Investigators believe Jennifer Kesse was abducted outside her condo near the Mall at Millennia on January 24, 2006. She’s never been seen since.

After years of working with Orlando Police, Kesse’s parents filed and settled a lawsuit for access to investigative records.

According to the Kesses, they can’t read a lot of the investigative files because of heavy redactions. Still, they feel there are new opportunities to investigate.

Gone but Not Forgotten

It has been 14 years since the Kesses last saw their daughter Jennifer. She moved into her condo complex, Mosaic at Millennium just two months since she went missing.

“You don’t realize it until…but you miss the sound of her voice, you know the actual…you are starting to forget the inflections of her voice and what have you. You only remember a few things instead of everything,” Drew Kesse said.

VIDEO: Drew Kesse on the Moment They Realized Something Was Wrong with Jennifer

In that time, Jennifer’s parents Drew and Joyce Kesse have continued relentless search efforts, vowing to do whatever necessary to find their daughter.

“I think is it a dream because some days it is still so surreal that this is the life that we live,” Joyce Kesse said.

The Kesses shared with Spectrum News home videos of Jennifer as a child. They say it’s easy reflecting on happier times.

“On a daily basis, yeah there is sadness. But there is hope and without hope, it’s difficult to get out of bed and put one foot in front of the next,” Joyce Kesse said.

The Kesses say they knew about 75 percent of what was in the OPD Investigative files, like case timelines, photos of Jennifer’s abandoned car found at a nearby apartment complex, surveillance video of a person dropping off that car, and family and friend statements.

But it’s interviews police did with construction workers employed at Jennifer Kesse’s condo complex that the family is paying particularly close attention to. According to the Kesse family, some of the workers made her feel uncomfortable, stopping and leering at her, Jennifer told them.

“We learned about this person, we took their statement, yeah we gave them a [polygraph test], oh yeah they passed the poly, let’s move on. Well did you do anything to investigate are they telling you the truth or not? We don’t see that in the files, so to say,” Drew Kesse said.

Within the OPD investigative files are polygraph test results from several people interviewed by police. The Kesses are using those results to conduct their own follow-up investigation.

We asked Orlando Police about the Kesse’s claims for missing records from 2012-2019. They sent the following response on Monday:

“Thank you for bringing to our attention the fact that the Kesse family had not received investigative information for the years after 2012.  After conducting a check, we discovered documented tips that had not been turned over to the family.  The leads were fully worked and investigated by Detective Sprague, and she was in contact with the family about the leads during that time.  In putting together all of the documentation related to this case, there were tens of thousands of pages of documents.  These particular leads were inadvertently excluded due to the volume of documents.  We have notified the Kesse family attorney and are in the process of preparing the documents for release to the family.”

VIDEO: Drew Kesse: "More Than One Person Knows What Happened"

For the first time since settling the lawsuit with the Kesse family, Orlando Police Chief Orlando Rolon is opening up about the handling of the Kesse case.

“This case has been assigned to different detectives and especially any lead that looked like it had the potential to yield something was investigated during the process,” Rolon said.

With the case now in the hands of the Kesse family, Rolon says he supports the family because ultimately all parties involved want the same thing.

“We all want to make sure that we find the people responsible for her disappearance," he said. "We want that to happen. We want to bring closure to a very, very, very troubling case."

Rolon believes that, even though the case is unresolved, detectives did their due diligence in trying to find Jennifer Kesse.

“I believe everyone acted to the best of their abilities to address this case and many of the people involved in this," Rolon said. "For us it’s very important, not only as a professional institution but also as a law enforcement agency. It’s also very important to us as human beings that we do everything that we can to find what happened to Jennifer and her whereabouts.”

Continuing the Search for Jennifer

Since settling the lawsuit with OPD, the Kesses have been working with their investigators and the Orange County Sheriff’s Office. They followed up on a new tip, leading them to search a lake in Gotha, about 15 miles from where Kesse lived, in November of last year.

VIDEO: Joyce Kesse: "Say Something If You Know Something"

“We have someone reach out to our investigative team after 13 years seeing us on TV and saying you know, something strange happened to me 13 years ago,  it’s never left my mind and this is what I’ve witnessed. I think I should help the Kesses,” Drew Kesse said.

Though nothing came of that search, the Kesses say they are relentless moreso now than ever to find their daughter.

"I believe Jennifer still needs to be rescued," Joyce Kesse said. "I am not delusional and I am aware that statistically Jen is probably deceased, but there are miracles that have been happening.”

The Kesses's attorneys are still working with police to get unredacted files.

If you have any information that could be helpful to the family, you can call the Kesse Family Tip line at 941-201-4009 or send a message to their Find Jennifer Kesse Facebook page.