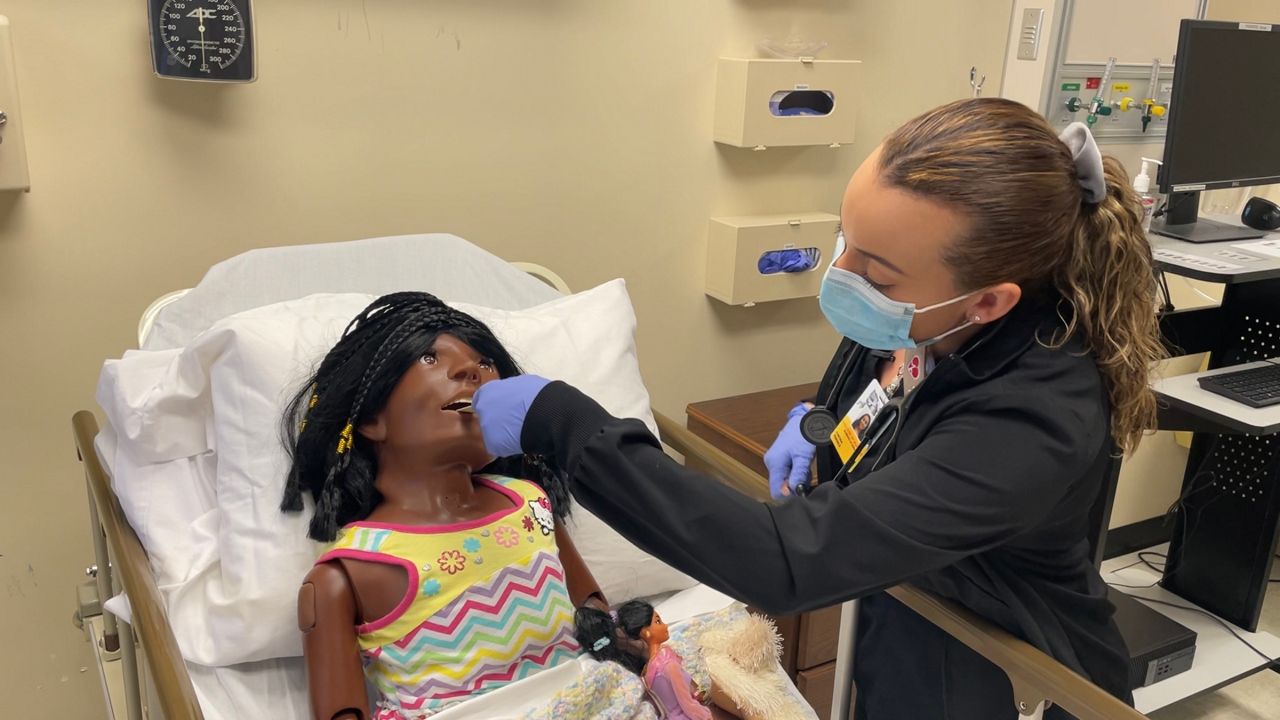 UCF nursing student Cynthia Fonseca — who has always dreamt of becoming a pediatric nurse and making a difference in her community — runs a health assessment on a demonstration child mannequin. (Spectrum News/Jesse Canales)

Officials say the coronavirus pandemic has highlighted many disparities the Hispanic community faces, especially when it comes to health care.

“In an ideal world, we wouldn’t see and we’d have perfect interpreter services where the cultural competency of the interpreter matches the patient," she said. "But in reality, people feel more comfortable with people who are like them, people who speak the same language, speak the same dialect, and come from the same place."

Data shows the percentage of Hispanic nurses nationwide — and in Florida — is lower than the Hispanic population.

In fact, a 2018 U.S. Department of Health and Human Services survey found Hispanics only make up about 10% of nurses nationwide, despite making up more than 18% of the U.S. population.

In Florida, only 15% of nurses are Hispanic, according to a Florida Center for Nursing report in 2019. In the Sunshine State, one out of four residents, or 25%, identifies as Hispanic.

It’s something Cynthia Fonseca, a UCF nursing student, hopes to change. As a Hispanic nurse, she understands some of the important cultural differences she would be able to address with her patients.

“Latina women tend to want to breastfeed less than normal, or go straight to formula or not breastfeed at all,” she said. “I feel like having someone who can understand and kind of get away the language barrier is so important for both the health-care professional and patients, because we really can’t give the highest level of care if we don’t have that kind of connection.”

Being a nurse is a career Fonseca dreamt of doing since high school, when she volunteered at Orlando Health.

“Seeing the nurses and how they directly have interactions with their patients and are so involved with the patient care, that’s what really made me want to become a nurse,” she said.

“I mean, I was born there, I volunteered there and that was really made me fall in love with nursing as a profession and made me want to pursue this profession, and now I work there,” Fonseca said. "So, it all comes full circle. It’s great. I love it.”

Fonseca said she hopes to start making a difference in her community, starting in her own home.

“Just culturally, you know, seeking help in health care as a Hispanic is not so common or as sought out as frequently,” Fonseca said. “So, that has been a challenge — I had to really convince them sometimes.”

Even though it can be a struggle to get her family to the hospital, she said she believes their support is a big reason why she’ll work in her dream hospital.

“They, thankfully, have always been supportive of me and my nursing journey,” she said.

Fonseca graduates in May with a bachelor’s degree in nursing.

News 13 reached out to AdventHealth and Orlando Health to see how many members of their nursing staffs are Hispanic.

Orlando Health did not disclose a specific number but did say more than 22% of its team members are Hispanic.

AdventHealth has not yet provided the data, but officials said they are working to provide Spectrum News' request.