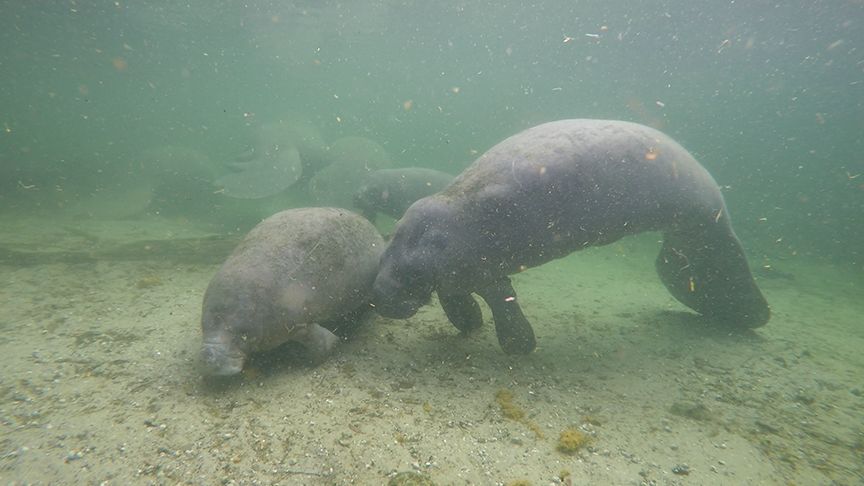 Before the year is up, 1,000 manatees will likely have died in Florida. While several factors are contributing to this surge, experts believe climate change could be playing a major role.

It is a shocking number that has rescuers and researchers alike worried for the future of the species.

SeaWorld’s Senior Animal Care specialist Maggie Mariolis is busier than ever at SeaWorld caring for manatees like Morty, who was orphaned as a baby. Mariolis makes sure he grows strong by bottle feeding him almost around the clock.

“It’s hard to have a bad day at work when you get to do this every three hours,” said Mariolis.

While her patients are cute, her job has gotten more difficult with more manatees from all across the state needing help and a record number of them dying.

“It’s been especially hard this year seeing them come in so sick, seeing them come in where you know its been a long time that they’ve been seraching for food. It wasn’t simply a boat strike that happened momentarily you know that this is something that this animal has been dealing with and potentially suffering for weeks if not months,” she said. “We don’t know when it going to stop.”

It is why she spends her days crisscrossing the park, armed with romaine lettuce, hoping to do her part to ensure the future of these marine mammals.

“Long term, we are definitely looking at drastic population loss which is going to impact whether these guys continue to be threatened or endangered,” said Mariolis.

It is a trend that also concerns Cora Berchem, a researcher with Save the Manatee Club.

“We literally lost almost a 1,000 manatees and it is only October and we’ve lost over 960 animals already, this is something I never wanted to experience and never thought I would experience,” said Berchem.

Berchem has seen it with her own eyes, working closely with SeaWorld. She helped release a once emaciated manatee named Mandy back in July. She believes climate change has a hand in these alarming numbers.

“There are so many levels of climate change, it does include warmer weather and potentially warmer water which sounds like a good thing for manatees, but it can also mean increased sea level rise which can kill off aquatic vegetation not adapted to these levels of salinity,” said Berchem.

She explained the effects of the changing climate can be felt across nearly the entire state.

“There is really almost nowhere for manatees to be safe, we are facing this humongous seagrass die-off on the Atlantic coast, increased red tides on the gulf coast,” said Berchem.

The Florida Fish and Wildlife Commission is requesting $7 million from lawmakers to combat these issues before things get even worse.

“I think we are really at a point in time that manatees need all the help they can get including state and federal help as well,” said Berchem.

Back at SeaWorld, Mariolis does what she can to help, mixing and measuring so that these manatees can get the nutrients they need to recover. But she worries what the future of Florida will be should more manatees continue to die.

“Every animal is critical to a healthy ecosystem and one of a manatees main jobs is to keep waterways clean, they graze back all of the plants that can kind of grow out of control so if the manatees aren’t there to open up the waterways then the alligators have nowhere to fish, the fish have nowhere to swim, dolphins have nowhere to go,” said Mariolis.

But she is hopeful that change can be made to give manatees a fighting chance in the wild.

“So until that day comes we are going to be here taking care of them every single day, it would be great to not have a need to bring manatees in to begin with,” said Mariolis.

As of Oct. 8, 968 manatees have died, according to Florida Fish and Wildlife Commission. The five-year average is 488.