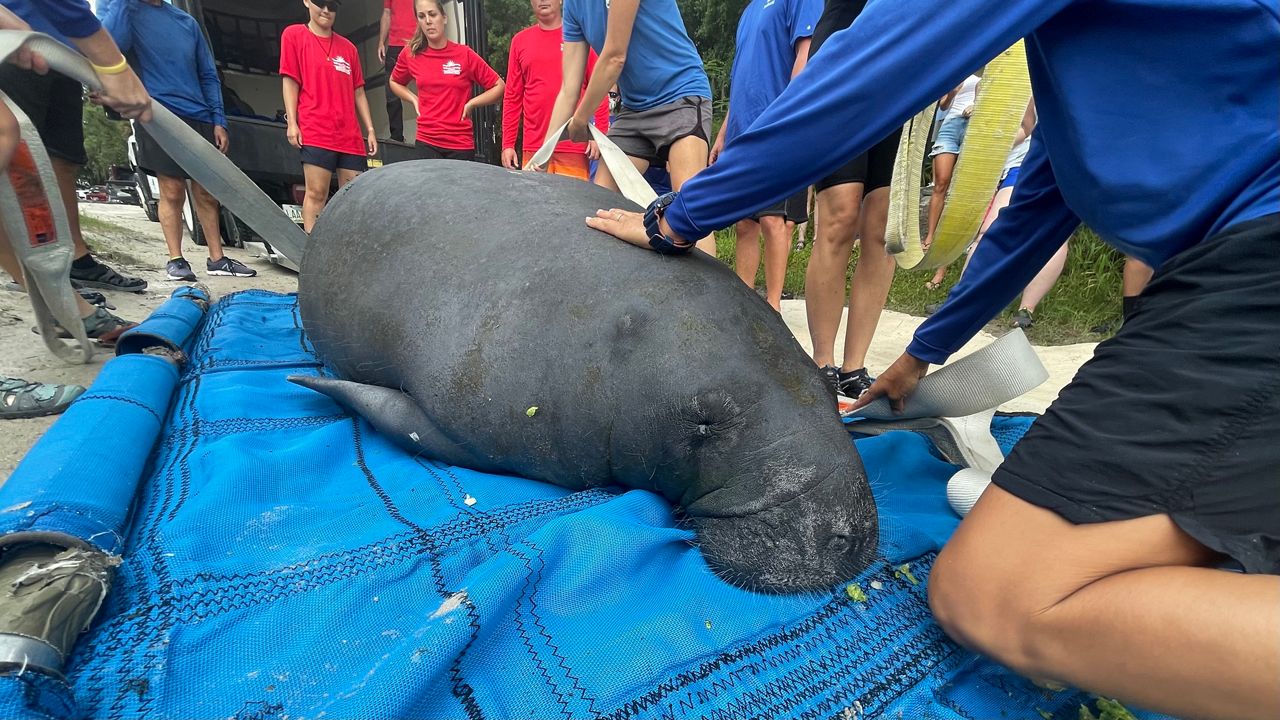 VOLUSIA COUNTY, Fla. — A mother manatee and her calf were returned to the wild Tuesday after being nursed back to health.

It’s a growing need that has researchers more and more concerned as Florida sets a new manatee mortality record.

A mother #manatee and her calf were returned to the wild after being nursed back to health, reports @nicolenews13.

It’s a growing need that has researchers more and more concerned as Florida sets a new manatee mortality record.

Mandy the manatee and her calf Manilow were released together at Blue Spring State Park. The pair have been in rehab at SeaWorld for the last five months, after researchers spotted them starving in the spring run back in March.

“We realized that she had lost a lot of weight, we could see ventral folds, we could even see her skull and her ribs. We were very concerned — when I first saw her I couldn't even believe that was Mandy," said Cora Berchem, a researcher with Save The Manatee Club. "We immediately called our partners at FWC and said, 'I think we need to intervene because this is scary looking.'”

It’s a problem Berchem says is becoming more common along the Florida coast.

“We are seeing a lot of emaciated  manatees," Berchem said. "This is really due to the loss of sea grasses in that area, manatees don’t have enough to feed on."

That is a big factor in why Florida just broke the manatee mortality record — 840 manatees died in just the first half of this year.

“The worst year on record we’ve had so far was 830 manatees back in 2013 where we had a very bad red tide," Berchem said. "Now those were 830 manatees throughout the entire year, between January and December. Now we have already seen over 840 within the first six months of the year. This is a record we never wanted to see broken.”

With only about 6,000-7,000 manatees across the state, Berchem believes the deaths are cause for alarm.

“Seeing those kind of numbers, people really need to care and change needs to happen right now," Berchem said. "Manatees (are a) very slow reproducing species. They don’t have a lot of time, they can’t make up for such a big loss very quickly. So if we don’t act now and even more manatees die, this is very scary. So this is something we need to tackle right now before the next winter.”

To help, Berchem said that the manatees' food source needs to be protected by cutting back on pollution, especially fertilizer.

‘All of those fertilizers run off into the waterways and that is what is causing those algae blooms, those nutrients in the waterways, even if you don’t live right next to a waterway," Berchem said.

Continuing on this path, Berchem is wary of what the future holds for manatees.

“This is a happy story for Mandy and Manilow that had a really happy ending," Berchem said. "This is great, but there are a lot of manatees out there that need our help."

Berchem said right now it's possible that Florida could see more than 1,000 manatees die in 2021.

Lawmakers are pushing for more funding for manatees and for them to be put back on the endangered species list. It is a move Berchem says the Save the Manatee Club supports — arguing they never should have been taken off the list in the first place.

Anyone who sees an injured manatee, is asked to call the Florida Fish and Wildlife Conservation Commission at 1-888-404-3922.