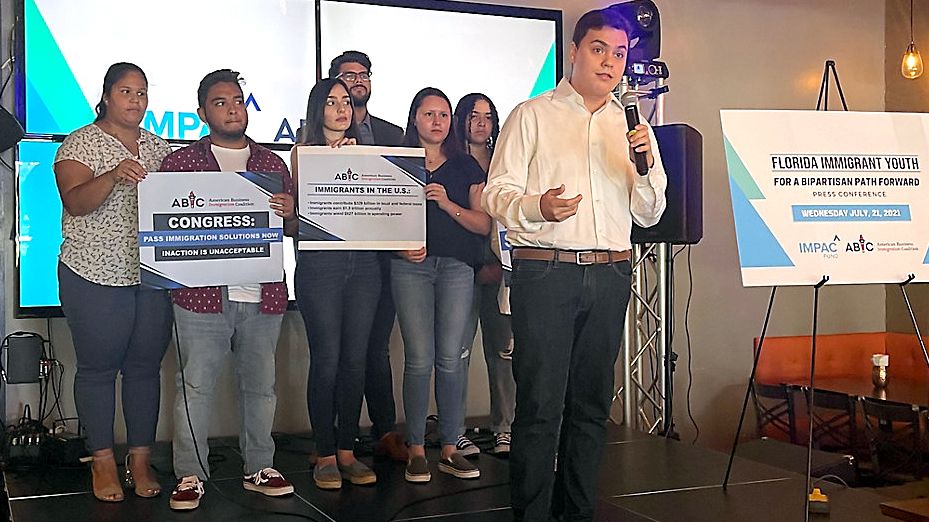 The event was created after a federal judge ruled DACA was illegal last Friday. It's one of many events the American Business Immigration Coalition plans to hold during its Week of Action.

After Venezuela received TPS designation, Gabriel Ortiz, a speaker at the event, applied for it.

Ortiz arrived in the U.S. about a year ago for what was supposed to be a short stay.

“I just came to visit one day and then I have to stay, the TPS came here, then the pandemic and then the whole political situation in Venezuela," Ortiz said.

He said his job as a human rights attorney in Venezuela put his life in danger.

“When you show that situation, when you say that it’s happening, that makes your life a threat, you and your family," Ortiz said.

After the DACA decision, he didn’t’ want to wait and see if his country’s TPS designation would be removed. He knows the first word in TPS, temporary, means just that.

It was why he and the rest of the TPS holders at the event called on Sens. Marco Rubio and Rick Scott to support the Secure Act, which stands for Safe Environment from Countries Under Repression and in Emergency. It would create a pathway to citizenship for TPS Holders.

“We are very concerned on what can happen in the designation of TPS," Ortiz said. "It’s important for me to have the opportunity to stay here, to work here, to give a better future to my people in Venezuela, and I don’t see a better way to it than here in the United States.”

He said if the situation in Venezuela were ever resolved he would want to go home, but doesn't believe that would happen any time soon.

In a statement, Rubio said:

"In the early days of the Biden Administration, and even during the campaign, his rhetoric sent the message to people in Central America that the laws were changing and they were allowed to come in. The same has been true with things like DACA. It sends the perception that when you have done TPS (Temporary Protected Status), which I supported, that people misunderstand what that means or lied about what that means. That's what a citizenship bill would do. It would create the perception that our laws would become more permissive. Trafficking networks use that to create disinformation to (lead) more people to undertake the very dangerous journey. It would be perhaps one of the worst things they could do right now, given the crisis we are facing on the border.”

Meanwhile, Scott said in a statement:

"Florida is an immigration state and Senator Scott has been clear that he supports legal immigration and a permanent solution for DACA and TPS. Immigration reform becomes much more simple once the border is secure and that’s where the conversation must begin. President Biden and the Democrats caused this border crisis with their radical open borders and amnesty policies — which hurt hardworking Americans and the millions of immigrants going through the legal process. Any immigration proposal needs to secure the border.