But at that moment, she says, she’s neither.

“I’m scared,” she says. “I’m scared because for me it’s a responsibility … I’m carrying the legacy of my family.”

Cepeda’s nonprofit organization says it aims to, like her mother’s, educate and transmit the values and cultural roots of bomba, Puerto Rico’s traditional dance and music.

On a day worth dancing over, Kissimmee’s Escuela de Bomba y Plena Tata Cepeda performs at Kissimmee Lake Park. The organization aims to transmit “the values and the cultural roots of Bomba (Puerto Rico's traditional dance) within and for the community.” pic.twitter.com/fJqmHIaiAk

With one of the largest Puerto Rican populations in the U.S., Central Florida offers a considerable audience for those music and dance forms.

“There are a lot of people here in Central Florida who need to connect with their culture, their roots, the tradition, the folklore,” Cepeda said, “… and bomba is a place where you can release all of your emotions.”

Bomba dates to Puerto Rico’s early colonial period when enslaved Africans found it a “source of political and spiritual expression,” according to the Smithsonian Institution.

Through the music and dance, enslaved people expressed — depending on the rhythm — a range of emotions including anger, sadness, and celebration. It also fostered community and identity.

The art form features hand drums, lyrics, and multiple rhythms, and it’s distinct from plena, a Puerto Rican music and dance tradition that emerged from bomba.

Cepeda’s skirt bore a representation of Puerto Rico’s flag, and the drums carried the sound of a heartbeat. 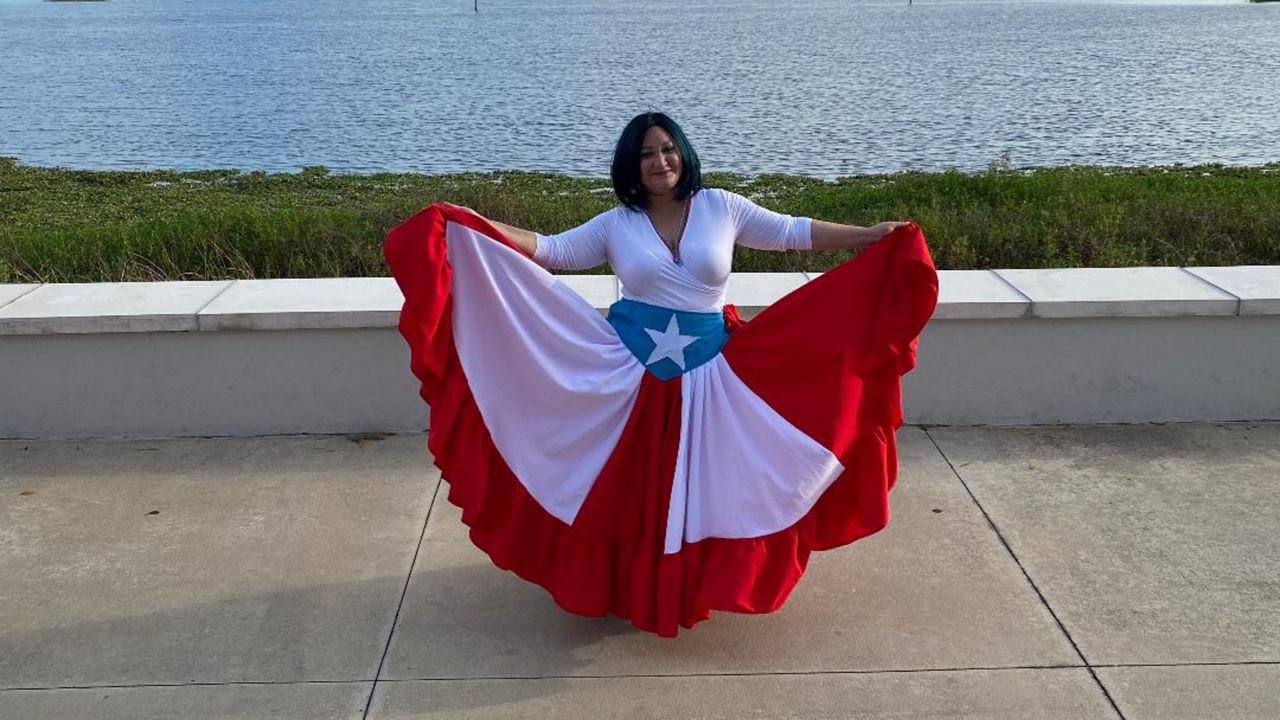 “There are a lot of things you can do with bomba, especially right now in protests like Black Lives Matter and for Black History Month,” Cepeda said. “All lives matter, so bomba is a way we can connect and we can reunite everybody as a community.”

She pointed to Central Florida’s Puerto Rican population, including immigrants after Hurricane Maria, which devastated the U.S. commonwealth in 2017.

Cepeda, 41, a teacher at Osceola County’s Boggy Creek Elementary School, said she started her organization in 2018, the year after Maria hit Puerto Rico. It attracted six or seven members who moved here from the island, she said.

“They needed to connect with the people in their community from Puerto Rico, and we just happened to be there at the right moment,” she said.

The school features about 30 members who range in age from 4 to their 50s, Cepeda said. The 4-year-old is her son, who’s learning percussion.

One membership group includes a mom who sings, a dad who drums and two daughters who dance.

Another participant, singer Hector Garcia De Leon, studies broadcast journalism at the University of Central Florida. A Puerto Rico native, he said his mother led a bomba group in Jacksonville when he was a child.

“I’ve grown up in bomba almost all my life,” he said. “Bomba is a part of my heritage and a part of my culture, and I knew that I wanted to connect with it as I grew older.”

During the coronavirus pandemic, all new members learn virtually, on Zoom, Cepeda said.

New students, who Cepeda said pay $220 including registration for 12 classes, first get introduced to the history and details of bomba, then to the basic steps for dance students and the basic drumming techniques for percussion students. Those who don’t have drums can improvise with empty paint cans, she said.

Cepeda honors her mother, Tata, in the name of her school. Tata Cepeda did similarly in naming her Puerto Rico school, extending the honor to a motherly grandmother.

Of her own mother, Barbara Liz Cepeda said, “I wanted to give her honor while she was living.”