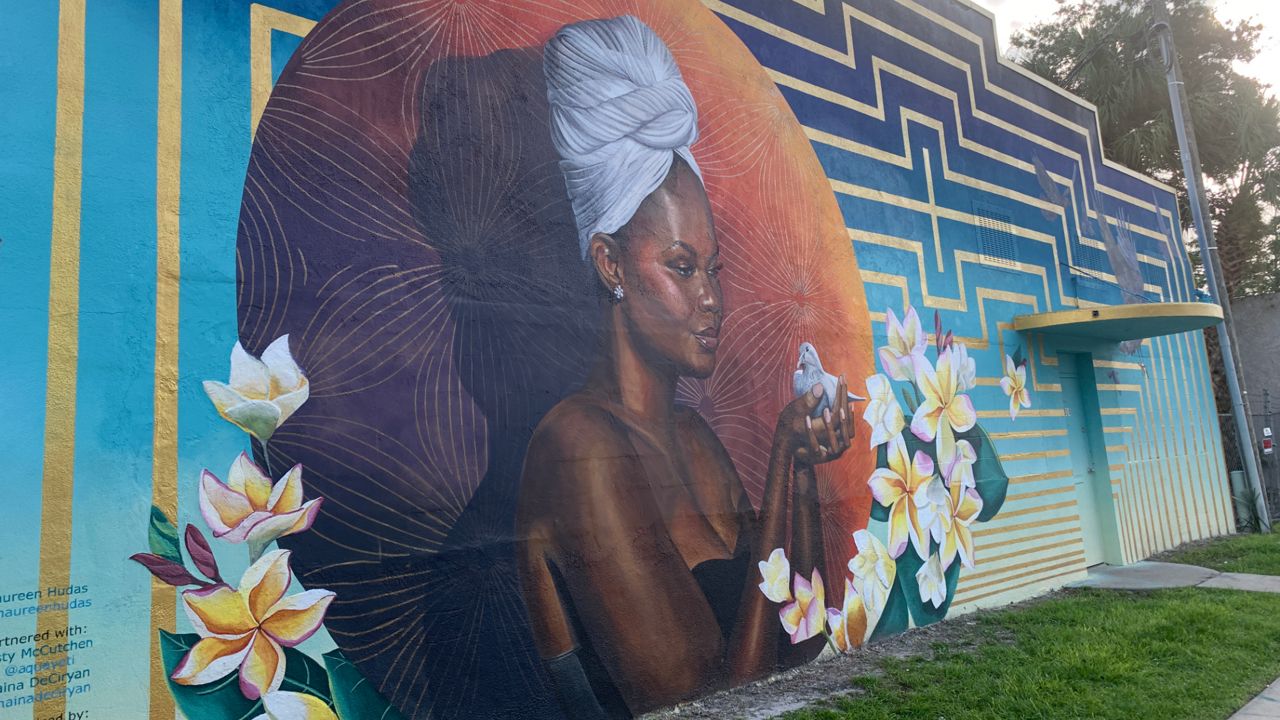 Justice for All: Mural is Orlando Artists' Labor of Love

ORLANDO, Fla. — In a year notable for so many different things, 2020 was also a year punctuated by protests, and people of all colors coming together to demand change.​

But, for many, like Maureen Hudas, it was a year of personal reflection on how to best contribute to a more equitable society.

“With the protests, I felt helpless. What do I do as a white female artist? How can I help?” she said.

Then one day, Hudas got a phone call from the owner of a building in downtown Orlando about doing a community mural, livening up the empty space along Church Street and inspiring peace.

Hudas called up fellow artist and future art conservator, Christy McCutchen, who she had met working on theme park projects years prior.

“I just want to honor Black women and young women in the community who are leaders," said McCutchen. The two discussed themes, wrangling a female crew and the notion of honoring an activist.

“I suggested, ‘Why don’t we contact this young woman, see if she’s interested in having a mural done of her?’" said McCutchen.

2020 was a year punctuated by protests & people coming together to demand #change.

TONIGHT @MyNews13, we continue our #JusticeforAll series w/ the story behind this mural, how it became backdrop for good in @citybeautiful + why we each have a role to play in #equality @MyNews13 pic.twitter.com/RIBhHknwqB

So, Hudas reached out to Jennifer H. Desire, who had been on the forefront of protests for weeks.

“The intention was to find a way to bring more hope to the city. They’re sitting there telling me, 'We’re going to put you on a wall,'" laughed Desire, who, in the end, agreed to participate.

The Haitian-born activist watched her mother organize for her community as a child. When Desire moved to Orlando in 2008, she brought that spirit with her. It spawned the Jennifer H. Desire Foundation, where she feeds the homeless, sometimes hundreds at a time, and every three months provides blessing bags of hygiene products for men and women.

“I guess I just saw it in myself to help out," Desire said.

MORE THAN A MURAL

By mid-August, about a month after they began, Hudas said that the mural was complete and wrought with much meaning.

For instance, the many ravens symbolize death, but also intuition. They're in flight in the mural, not confined by the rigid lines of the golden birdcage. Desire appears holding a white dove in a glowing, orange orb for unity.

As for the interconnected flowers, they are a "symbol of how we’re all most beautiful when we are connected," said Hudas.

It was a labor of love, and more time-consuming than any of the artists could imagine.

“We definitely worked more slowly some days because we had some long conversations that happened," laughed McCutchen.

“People would stop, talk. We would hear their stories," said Hudas. "That is another sense of how art can be a bridge between communities. Getting out there and starting a conversation with people who you wouldn’t normally have a conversation with.”

That is precisely what Orange County Arts and Cultural Affairs' Director Terry Olson says happens when communities bond over art.

And as Olson said, art is meaningful, spurs conversations — and even change.

“The extra stimulus, catalyst for innovation that comes with different people from different cultures working close together," he said. “As we deal with controversies like, ‘Do we want to have a statue of Andrew Jackson in our square?,' great emotions come up, because art represents things. So, understanding what it represents and why is a really important thing."

MORE THAN A MURAL: If you cruise along Church Street in #Orlando, you’re bound to see it ⬇️

A colorful #mural, rife with meaning, like interconnected flowers, a dove of peace and ravens in flight, not confined by the rigid, golden birdcage. @MyNews13 #JusticeforAll #News13Orange pic.twitter.com/vnExVxrmqj

Yet, perhaps even more important than the welcome reception the mural received from the community was into what the mural morphed: It became a staging area for Desire to feed the homeless, as well as a backdrop for community organizing.

“I’m like hey, 'I’ll have hot food for you guys at the mural,' and they know exactly what I’m talking about," said Desire.

Since its debut, Desire says she has been able to help others get their own non-profits off the ground. She's gained additional inspiration in knowing what the project may convey to others.

“You have to think about how this is breaking generational thoughts in society, how society sees people. I don’t think America sees Black people as equal," she said.

“Young, Black people who have great ideas … we need to bring them forward, put them in positions, listen to them. And I think that’s where it starts," she said. "This generation, that’s the now generation. We’re not going to take 'no' for an answer.”​

Hudas, who donated her talents to make the mural happen, knows her contribution might be small, but is still valuable.

“It was me saying, 'You have support.' There are people in this country who have your back," she said. "We all get that voice in our head, 'What can I do? I’m just one person.' It can spark, be like that pebble that ripples out and people get inspired."