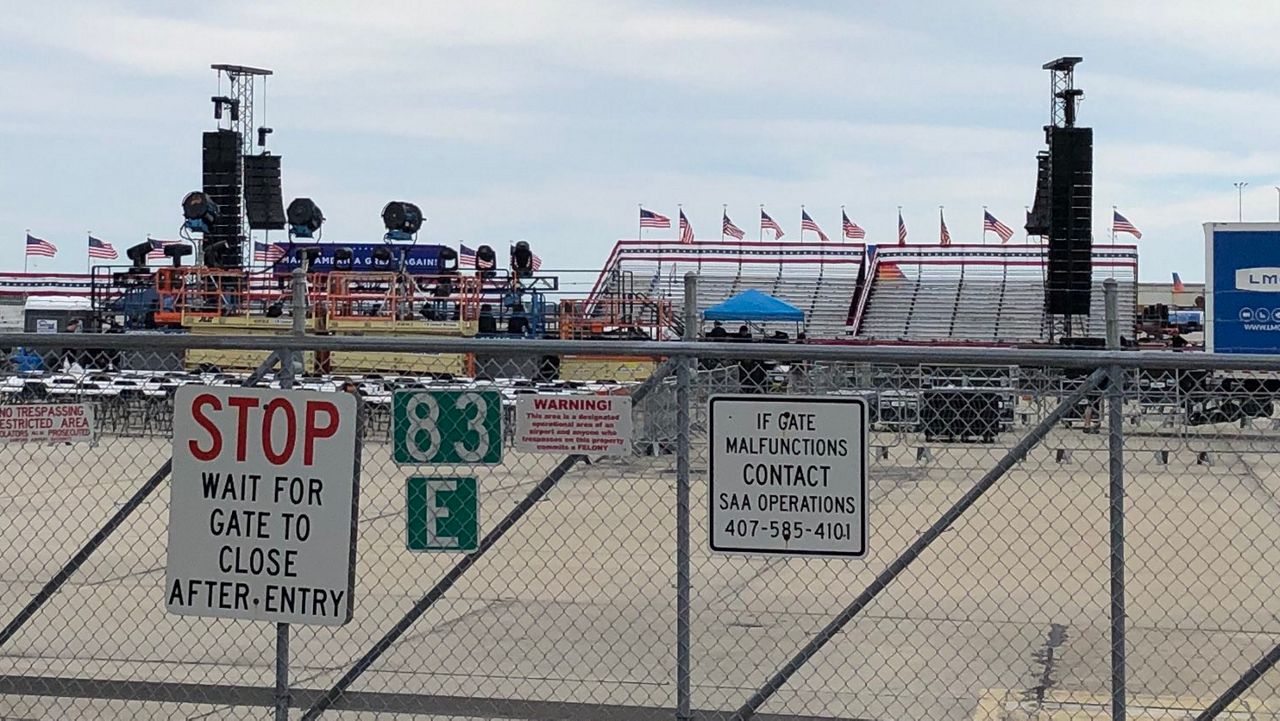 Preparations for a Trump campaign rally at Orlando Sanford International Airport in Central Florida were halted Friday morning, hours after President Donald Trump announced on Twitter that he had tested positive for the coronavirus. (Justin Soto/Spectrum News)

SANFORD, Fla. — The Trump campaign rally that had been planned for Friday evening in Central Florida was canceled just hours after President Donald Trump announced on Twitter that he had tested positive for the coronavirus.

With just one month to go until the election, Trump's coronavirus diagnosis is expected to be a major setback on the campaign trail.

Visiting key battleground states such as Florida are crucial to garnering as much support as possible with just weeks to spare until Election Day.

Empty bleachers greeted the planes Friday morning behind the Million Air hangar at Orlando Sanford International Airport. By the afternoon, crews were breaking down the sets.

Packing Up: Crews are clearing the stage set up at Sanford International Airport where President Trump was supposed to hold a rally tonight with thousands of supporters.

Bad timing with a month to the election.

I’m digging into the final stretch efforts by both campaigns. pic.twitter.com/aB95JyY7sq

"We often think in our mind that the leader of the free world is often protected from whatever illnesses are out there, whatever risks are out there, but I think it's a moment of very difficult reality," Central Florida based political analyst Frank Torres said.

He said the president's coronavirus exposure will shake up the campaign trail.

"I do believe he'll do some limited amount of virtual campaigning," Torres said. "You can expect to see some videos coming from him."

"In 2016, we voted for the president just a little over 1 percent," Trocine said.

With just weeks until Election Day, Torres said Trump will have to work hard as much as he can to win over Florida voters and the country.

He said we can expect to see other members of the president's family out and about campaigning for him while he's in quarantine.

It's unclear if the Sanford rally will be rescheduled. Trump and others in his inner circle are currently under quarantine.

Vice President Mike Pence and his wife, who traveled with Trump to his first presidential debate with Democratic rival Joe Biden earlier this week, said Friday morning that they had tested negative. Biden and his wife also said they tested negative.

Trump has continued to reassure Americans that we are "rounding the corner" of this pandemic, although national health experts do not agree.

Top aide Hicks traveled with the president multiple times during his busy week, including aboard Marine One, the presidential helicopter, and on Air Force One to a rally in Minnesota on Wednesday. She was also aboard Air Force One en route to Tuesday night’s debate in Cleveland.

Hicks began feeling mild symptoms during the plane ride home that evening, according to an administration official who spoke to the Associated Press anonymously. The source said she was isolated from other passengers.

Pence tweeted overnight his support for Trump and the first lady, praying for a full recovery.

Karen and I send our love and prayers to our dear friends President @realDonaldTrump and @FLOTUS Melania Trump. We join millions across America praying for their full and swift recovery. God bless you President Trump & our wonderful First Lady Melania.