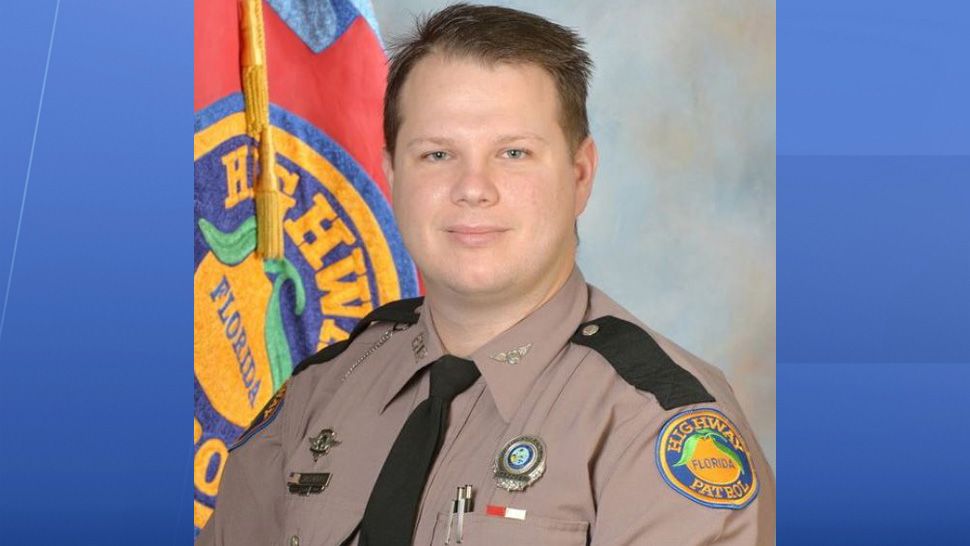 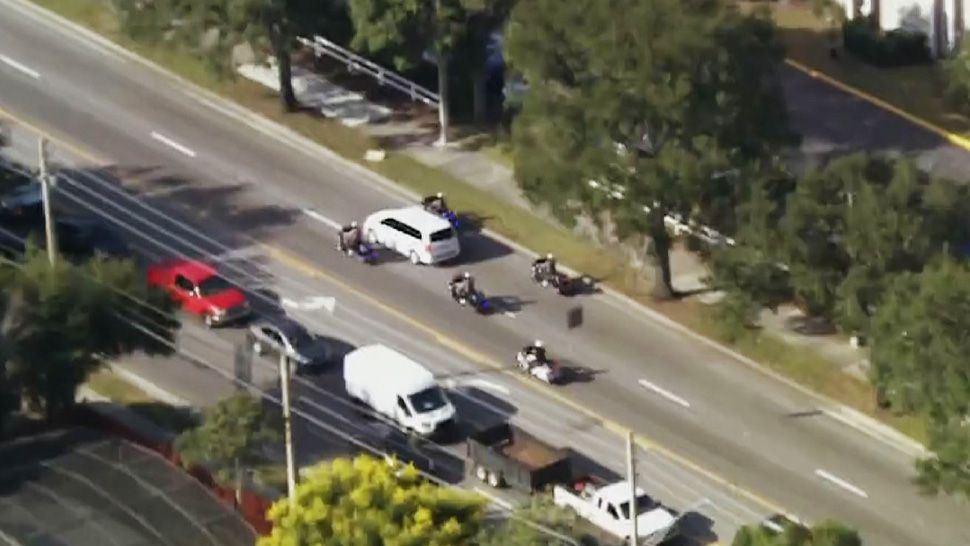 2 of 5
Florida Highway Patrol Trooper Tracy Vickers died following a crash on State Road 408 on Friday morning. His body was given an honor guard. (Sky 13) 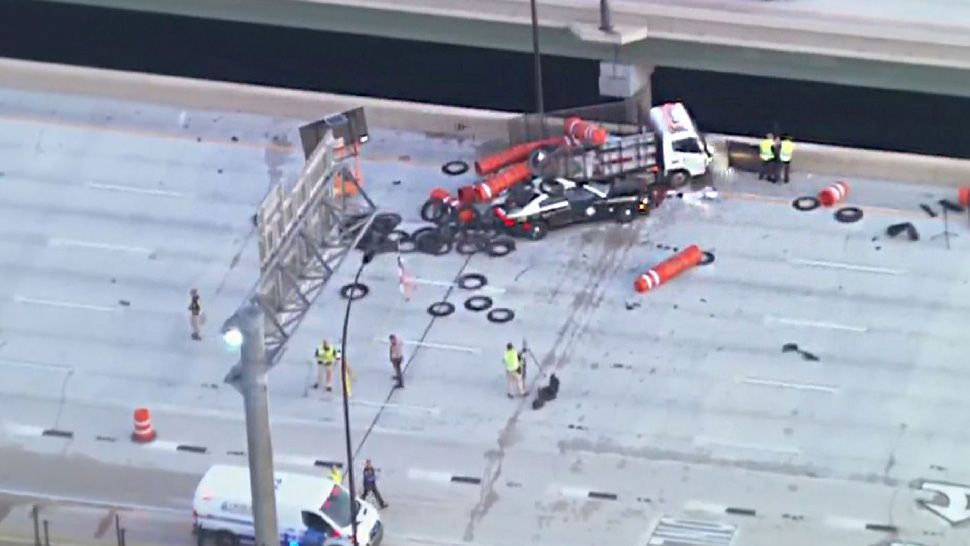 3 of 5
Florida Highway Patrol Trooper Tracy Vickers' car appears to have collided with a truck carrying construction barrels near the Conway Road exit at mile marker 13 over Lake Underhill. (Sky 13) 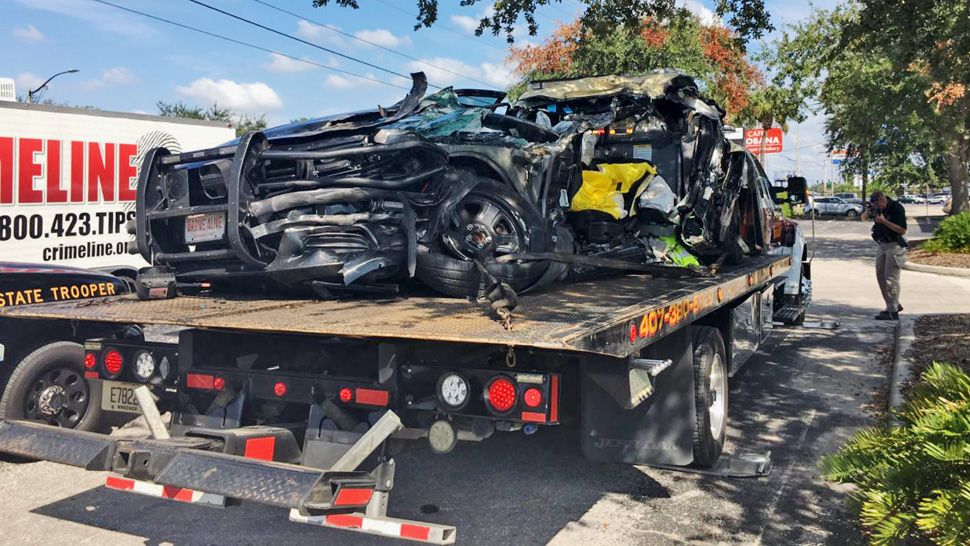 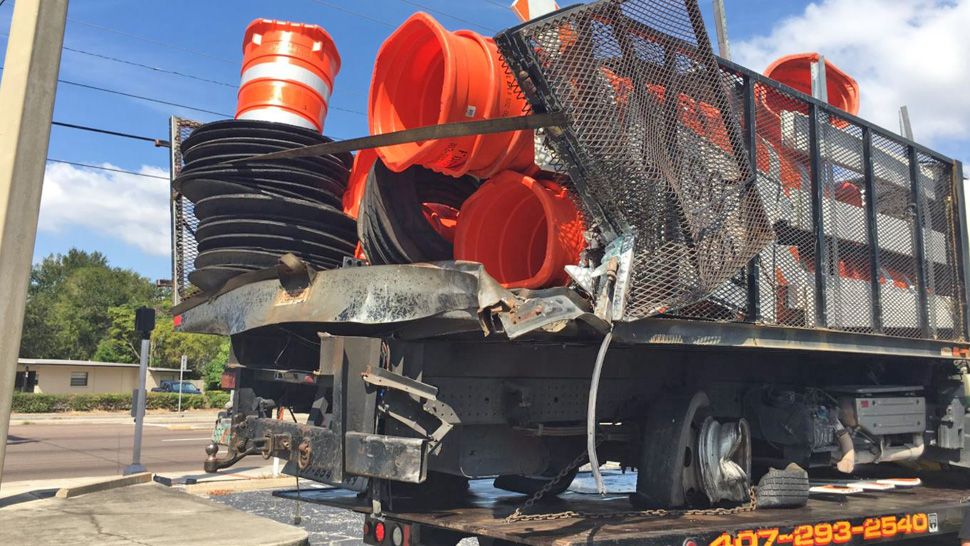 5 of 5
This is the construction truck that Florida Highway Patrol Trooper Tracy Vickers' patrol car collided with on State Road 408 on Friday, September 27, 2019. (Asher Wildman/Spectrum News 13)

ORLANDO, Fla. — A Florida Highway Patrol trooper who was killed in a crash on State Road 408 was remembered as a "leader" during a somber news conference Friday.

"One of our troopers has been killed in the line of duty. ... I'm sad to report the loss of one of our own, Trooper Tracy Vickers," said Col. Gene Spaulding of the FHP. "We are all heartbroken at this tragic loss."

The entire @FLHSMV family mourns today for the loss of one of our own, FHP Trooper Tracy Vickers. Trooper Vickers was a hero and leader within the patrol and his troop. We ask that you keep his family in your prayers. #FHP #EOW pic.twitter.com/4woSEWdiE5

The fatal crash happened near the Conway Road exit over Lake Underhill.

Spaulding said Vickers was ending his shift at the time of the crash.

“At this time, it does not appear he was responding to a call. But you never know what a trooper is doing. He may have been taking enforcement action," Spaulding said.

"We just don’t know. We are still in the very early stages of that. There was no call on the computer aid dispatch system,” he added.

"Trooper Vickers was a leader with the Florida Highway Patrol and with his troop," Spaulding said.

Vickers graduated in 2015 from the 131st recruit class of the Florida Highway Patrol, and the 31-year-old U.S. Navy veteran trained and mentored new troopers. He received a National Defense Service Metal.

Vickers was with Florida Highway Patrol for more than four years and started in Troop K, which is stationed in Leesburg in Lake County. He was later assigned to Troop K in Orange County.

He was engaged to be married.

Vickers was passionate about his patrol and did what was needed, Spaulding said, adding that Vickers responded to civil unrest and hurricanes within the state and country.

Vickers will be the 49th name that will be on a FHP wall of troopers who have died.

"He has made the ultimate sacrifice. ... he will always be part of the FHP family," Spaulding said.

Spaulding said the crash investigation is in the early stages and could take weeks, if not months, as traffic homicide investigators go over the site. They are collecting evidence and witnesses statements.

Spectrum News 13 reached out the Flash Rite, the company that owns the construction truck Vickers crashed into, but they declined to comment.

The eastbound lanes were shut down at Bumby Avenue to Conway Road for most of the morning. State Road 408 reopened at about 1 p.m.

Officials from several law enforcement agencies and municipalities expressed their condolences on Twitter.

We stand by our brothers and sisters from @FLHSMV @FHPOrlando as they deal with the unimaginable today. Praying for the officer’s family, friends and the department. #ThinBlueLine pic.twitter.com/JQZT8jKcrO


Our thoughts are with the family of Trooper Tracy Vickers and his colleagues at the @FLHSMV. Rest in Peace and thank you for your service. https://t.co/bNkoJrgZKa pic.twitter.com/ntFEhJ1SYm


We stand in grief with the entire @FLHSMV family, and especially our brothers and sisters in @FHPOrlando Please keep #FHP Trooper Tracy Vickers Family in your prayers. #EOW
Rest peacefully, Trooper. https://t.co/8TXyAfVp1y