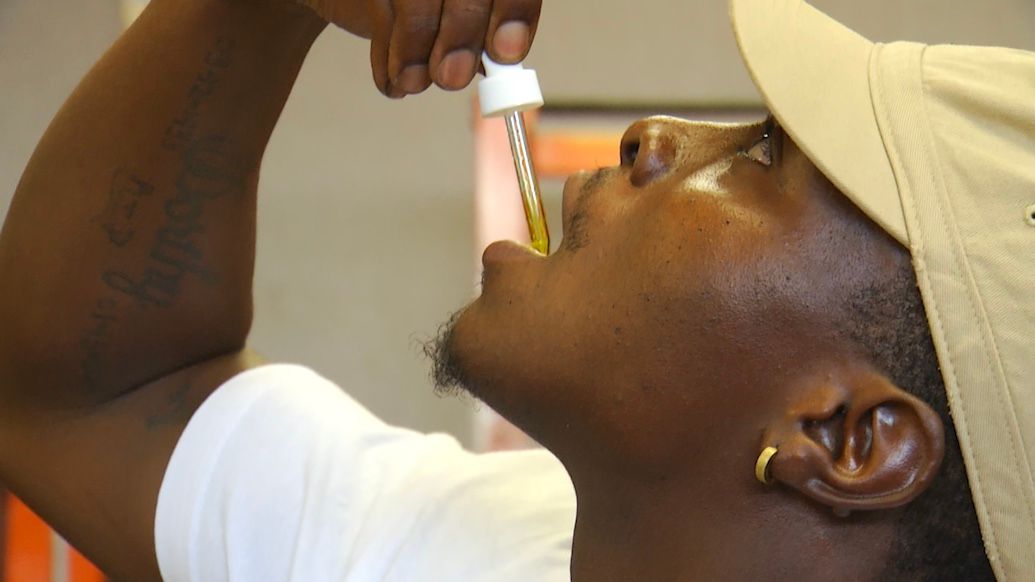 Football players advocate for CBD as an opioid alternative

In Sanford football is a way of life.

“I’ve been playing football since I was five years old,” Serderius Bryant says while sitting in the Seminole High School football stands.

Serderius played at Seminole, now he’s back home training.  Hoping for one more shot at the NFL after playing linebacker for Ole Miss and the Ottawa Red Blacks of the CFL.

“It seems like the whole city has always been around football and always will be just because we feel…this is the only way we can make it out.”

At home the motivation was all around him.  He grew up with his Grandma in Sanford.  His mother was addicted to crack cocaine.

Serderius had every reason in the world to stay clean, but as a linebacker clean has a broad definition.

One of those hits was during arguably the best game of his college career.  October 12, 2013 vs. Johnny Manziel and Texas A&M.  On the last of his team high 12 tackles Johnny Manziel was running in the open field.  Serderius made the tackle but collided awkwardly with his head and neck.  He was carted off the field in a stretcher and taken to the hospital.

“First thing I remember is waking up in the hospital and asking did we win?”

Ole Miss lost the game 41-38.  But this story isn’t about wins and losses.  It’s about how athletes like Serderius deal with pain.  At the hospital he was prescribed opioids, but he’d already found his own way to cope.

“Whatever they prescribed me to take I never really did take those I always turned to cannabis.”

Serderius first started using marijuana at Ole Miss.  He says the use of it is very high among players in college.

“I don’t know if it’s for pain or for more medicinal reasons or both,” Serderius says.

Marijuana is illegal at the federal level but is legal for medical purposes in over half the states including Florida.  For NCAA athletes marijuana is on the banned substance list.  At Ole Miss Serderius says he failed 7 drug tests, but never got suspended once.  But during his Senior year he had run out of chances.

His coaches told him “hey we’re going to give you one more chance if you mess up on this chance you’re going home your scholarship is gone.”

Treyous didn’t just use marijuana after games, he smoked before.

“I was high in all of my games except for one,” Treyous says.

Treyous was never tested at Colorado State.  But when the coaching staff changed his senior year he chose to leave the football program to protect his scholarship.

Serderius ended up going to rehab, stopped smoking and was able to finish his career at Ole Miss and go on to the CFL.

“When I was using the full plant I didn’t have as much knowledge about CBD,” Treyous says.

CBD or Cannabidiol is derived from the Cannabis plant just like marijuana.  The key difference it contains low amounts of THC, the compound that makes you high and test positive on a drug test.  CBD can get ingested in several forms like oil, a topical cream, even gummy bears.

“It’s like the same thing without the psycho active.  You don’t get the feeling like your heads in the clouds,” Serderius says.

During our interview he took some CBD and started a work out.  Both Serderius and Treyous swear by CBD’s pain relieving effects.  However because it comes from the cannabis plant it is still banned by the NCAA and major American sports leagues.  In 2018 the World Anti Doping Agency took CBD off its banned substance list opening the door for change.

Is it really a miracle drug?

In his Miami wellness center Dr. Herve Damas is sitting down with a patient.

“I think there are a couple of things that cannabis can do for you,” he says after listening to the patients symptoms.

Dr. Damas is a state certified cannabis physician.  He can prescribe patients medical marijuana for a variety of state accepted ailments.  He can also recommend and sell CBD.  If the CBD comes from hemp and contains 0.3% or less THC it can be bought without a prescription.

Dr. Damas knows athletes because was one.  He played at Hofstra and for the Buffalo Bills in the NFL but suffered a career ending knee injury.  He has experienced the relief from CBD first hand.

“My headaches are gone, the insomnia is gone, the anxiety, the body aches and I’m not high,” Dr. Damas says.

But if it’s really such miracle drug, why isn’t it widely accepted?

“I think there are mixed feelings about it,” Dr. Jay Falk an Orlando based emergency room physician says.  “There are many of us that think it’s probably effective for a whole variety of things.

Dr. Falk believes CBD can be an effective alternative to opioids for certain types of chronic pain, but says more research needs to be done.

“Despite the fact that it appears to work, we are not really sure how it works just yet and we certainly are not completely aware of any potential unintended consequences,” Dr. Falk says.

Serderius and Treyous are prepared to do the heavy lifting.  Together they are part of a cannabis consulting group called Motives Made Just for Athletes,  MMJ4A for short.  Their goal is to educate players, teams, and coaches about CBD.

“My mission is to get CBD throughout every sports organization,” Treyous says.  “That’s my vision because I know how athletes can benefit from CBD.”

“We want to get out and educate athletes, educate parents, educate doctors, educate everyone in the neighborhood that [CBD] is an alternative,” Serderius says.​