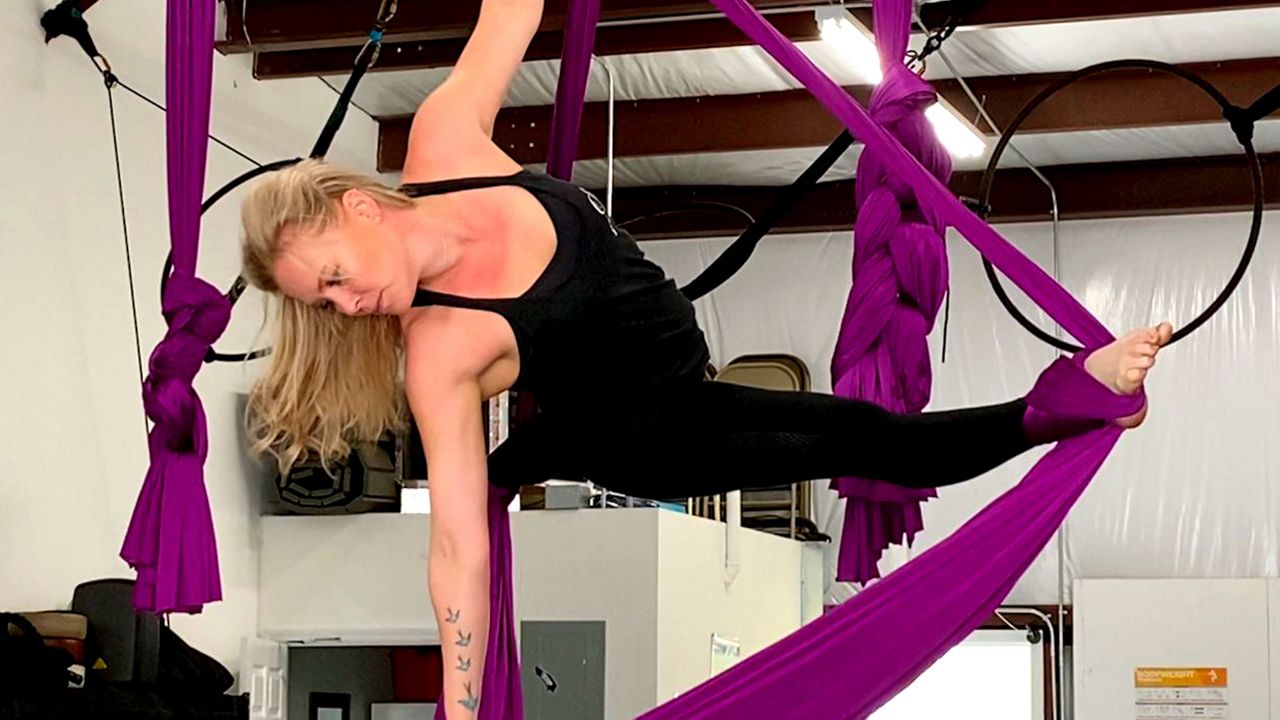 EUSTIS, Fla. — Aerial skills are a common circus trick, but now, dance and acrobatics in the air are gaining more popularity across ages as a form of exercise and expression.

After 13 years as a dancer, Denise Lloyd spends her days spreading her passion for another performing art. And this one requires her to be up in the air.

“I took a couple years off of dance and tried aerial, fell in love with it,” said Lloyd, who owns Soar Athletics.

The aerial artist started teaching and then got into entertainment, performing at places like Universal, Disney and Sea World. But after having three children, Lloyd faced a common struggle among parents.

“Once I started having kids, I went more onto the coaching side of things and wanted to open the studio then,” said Lloyd.

So, she took the opportunity to shift her career track and opened Soar Athletics in Eustis. But they had barely gotten off the ground when the pandemic hit.

“It was a little nerve-racking, but we did really well with it,” said Lloyd. “We have really faithful students and great coaches that helped keep the opportunity open for people to come into.”

Soar offers classes like aerial silks, Lyra and trapeze to students from four years old to adults. And Lloyd stresses that ’can’t’ isn’t a word used in their studio.

“A lot of people feel like, ‘Oh, there’s no way I can do that.’ But really, there’s multiple skills where it’s able to help anybody bring up their confidence,” explained Lloyd.

She also surrounds herself with other athletes who are well trained in the sport, like circus artist McKenna Wilkins.

“Aerial arts has become really popular, very quickly. So it is very competitive,” said Wilkins, who is a coach at Soar Athletics.

Wilkins says even though she’s a seasoned performer, it took a bit to translate that into coaching. But now, she loves watching her students reach new heights.

“Everyone has different strengths and weaknesses and goals. So there’s so many things, so many factors that are different with each person,” said Wilkins. “So it’s a really cool challenge to learn how to help everybody.”

“The joy on their face when they’re able to accomplish a skill that they haven’t been able to do in a long time is probably the most rewarding thing that I get from being a coach,” added Lloyd.

These aerial artists are making the industry approachable. They are passing along their skills to help others work on their own self expression and strength.

“It’s like you’re really learning to conquer your body, really making it your own and feeling comfortable in yourself and your abilities,” said Wilkins. “Because you’ll always be surprised at what you can do.”

If you catch a performance from Soar Athletics, it’s something you won’t forget. And Lloyd can hardly believe where this new adventure has taken her, in her climb to the top.

“I thought it would just be a couple classes a week, and it’s turned into an entire business where we have multiple coaches, and it’s a huge blessing and I couldn’t be more grateful for it,” said Lloyd.