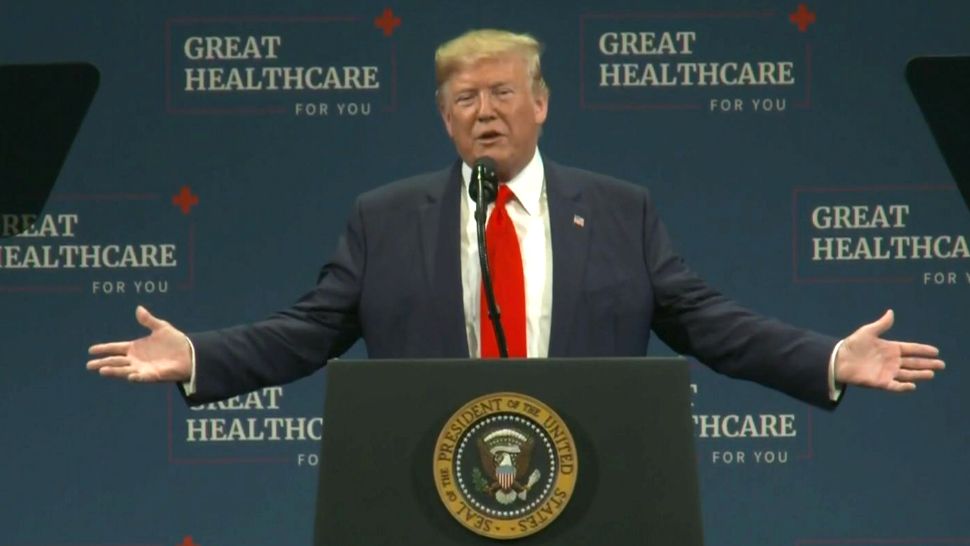 President Donald Trump takes the stage in a performing arts center in The Villages, Florida, where he's speaking about his plans for Medicare. (Spectrum News)

THE VILLAGES, Fla. — President Donald Trump got a warm welcome in The Villages Thursday, where he signed an executive order on Medicare and

The president had the perfect venue for the rally — The Villages, the booming senior community spanning Lake, Marion and Sumter counties that's a Republican stronghold. Some 70 percent of Villages residents voted for the president in 2016.

Thousands of supporters were already waiting for Trump's arrival Thursday morning, between the the venue and the airport where Air Force One touched down in Ocala..

The president signed an executive order expanding provisions of the Medicare Advantage program, a privatized version of the traditional Medicare program.

But before that, he attacked Democrats for their various health care reform proposals, including Medicare for All, calling them Socialism.

The Medicare Advantage program's plans offer savings on premiums and an annual limit on out-of-pocket costs, and eliminates the need for supplemental insurance.

But disadvantages include limits on choice of hospitals and doctors, as well as needing prior insurer approval for certain procedures.

"We believe when seniors have more options, they make the best decision for their own health care as opposed to a one-size government run health care system which is really the Democrat's vision for where we should be headed," according to Joe Grogan, White House director of the Domestic Policy Council.

But the administrator of the Center for Medicare and Medicaid, and Health and Human Services Secretary Alex Azar, say the executive order will go beyond that.

They said the order will be more of a directive for HHS to come up with proposals and reforms. They want to eliminate regulation and want private insurers to have more of a role.

Within Medicare and Medicare Advantage, they want to expand services and access to things such as new therapies and telemedicine options. They also want more hospital pricing transparency and lower prescription drug prices.

Presidents chopper that will take him to The Villages has arrived. Still waiting for Air Force One’s arrival.@MyNews13 pic.twitter.com/IcV2hYBHdK

Meanwhile, Democrats who support "Medicare for all," such as senators Bernie Sanders and Elizabeth Warren, believe expanding Medicare coverage to everybody will eliminate out of pocket expenses to improve health care costs.

Some Democrats gathered Thursday morning at the Democratic headquarters in Wildwood. They say the president’s health care plans to privatize much of Medicare through Medicare Advantage will make it more difficult for them to get the care they need.

"If we had Medicare for all, everyone would have insurance. They wouldn’t have the risk of being sick and going bankrupt, having their employer cancel their insurance," said Villages resident Larry Shipley.

The president is facing criticism for proposing in his 2020 budget to cut $845 billion from Medicare over the next 10 years.

The White House countered by highlighting efforts with Republicans and Democrats in Congress to cap prescription drug prices.

Exit polling during the midterm elections showed health care was the top issue for voters, which is a topic many are expected to hear during the race for the White House.

Updates from our reporters covering the president's visit