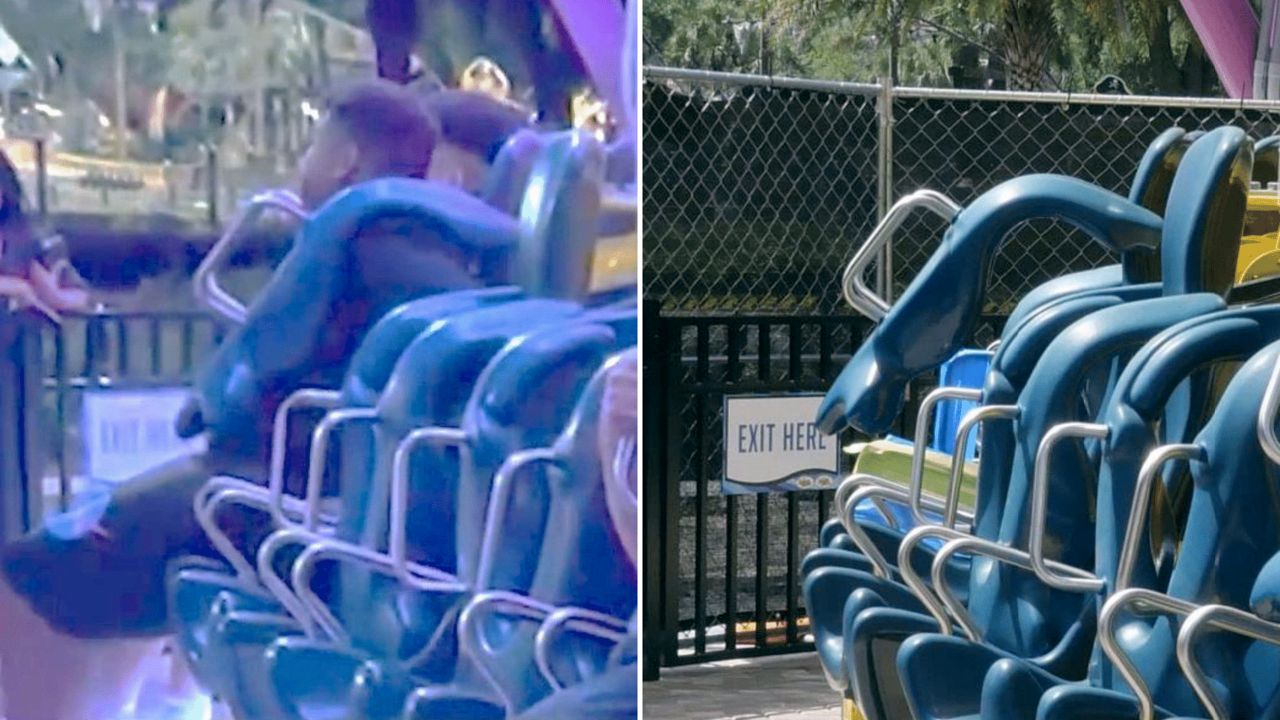 Officials say this investigative photo shows 14-year-old Tyre Sampson in his seat on the Orlando FreeFall ride in March, illustrating how the gap allowed in his seat was significantly larger than other seats on the attraction. (File Photo)

TALLAHASSEE, Fla. — Government officials say exclusive video obtained by Spectrum News is currently part of an investigation into the March death of 14-year-old Tyre Sampson, and allegedly shows two people altering company records in the wake of the teen's death.

Spectrum News has reached out to the ride's operators, Orlando Eagle Drop Slingshot, LLC, for comment but has not received a response.

This story will be updated with the company's statement once it is received.

Florida Commissioner of Agriculture Nikki Fried has filed an administrative complaint seeking at least $250,000 in fines from the operator of the Orlando FreeFall ride in connection with Sampson's death.

Orlando Eagle Drop Slingshot, LLC, was named as the respondent in the complaint, which Fried announced in a news conference Tuesday.

The complaint stems from the death of 14-year-old Tyre Sampson, who slipped out of his seat fell from the 430-foot drop tower ride in March.

An investigation into Sampson’s death found that a safety sensor had been adjusted on two of the attraction’s seats, which allowed a gap of up to 7 inches between the harness and seat to accommodate larger patrons.

According to Tuesday’s complaint, the gap set for the remainder of the ride’s seats was only 3.33 inches.

“The (Department of Agriculture’s) investigation revealed that Drop Tower attendants were specifically instructed to seat ‘larger guests’ in Seats 1 and 2, indicating Respondent’s awareness and exploitation of this discrepancy in settings,” the complaint alleged.

Additionally, the ride’s maintenance manual specifically set a weight restriction of 286 pounds for riders — at the time of his death, Sampson weighed approximately 383 pounds.

“If those conditions are not met, the Drop Tower Manual specifically instructs: Do not let this person ride (emphasis in original),” the complaint said.

The complaint lays out a number of other issues that officials say contributed to Sampson’s death, including that loading procedures were not followed when placing the teen in the ride; the ride’s operator was “an unsupervised trainee who had been on the job for only three days”; and records of daily inspections and maintenance were “deficient.”

Operational safety consultant Brian Avery has worked for nearly 30 years in the events, tourism and attractions industry, with a specific focus on safety and risk management.   He’s a member of ASTM-F24, the international standards committee responsible for setting amusement ride safety guidelines.

Those guidelines, first developed in the late 1970s, are widely accepted as the industry standard, but they’re voluntary — and that’s a huge part of the problem, Avery says.

“At this point, ASTM is just a standard, unless it has been adopted, whole or in part, by a state,” Avery said, adding that across the U.S., “it’s a mixed bag” when it comes to which states abide by the voluntary standards.

Eight states don’t have any oversight of amusement rides at all, according to RidesDatabase.org, which ride safety experts say is the most exhaustive and recently-updated dataset available.

In Avery’s opinion, Florida is one of 20 U.S. states that have what he characterizes as “comprehensive” oversight of amusement rides. But that’s a loose definition, he said, because there’s still wide variation among those comprehensive states.

“My hope is one day, that these standards become adopted at a federal level, possibly, or just recognized by the industry as a whole,” Avery said.

Fried’s complaint lays out a total of six counts against Orlando Eagle Drop Slingshot, LLC, with each carrying a fine of at least $10,000.

In all, the complaint is seeking a total fine of at least $250,000, calls for the company to “cease and desist specified activities,” and would revoke the Orlando FreeFall’s permit.

The company has 21 days to request a hearing to dispute the complaint.