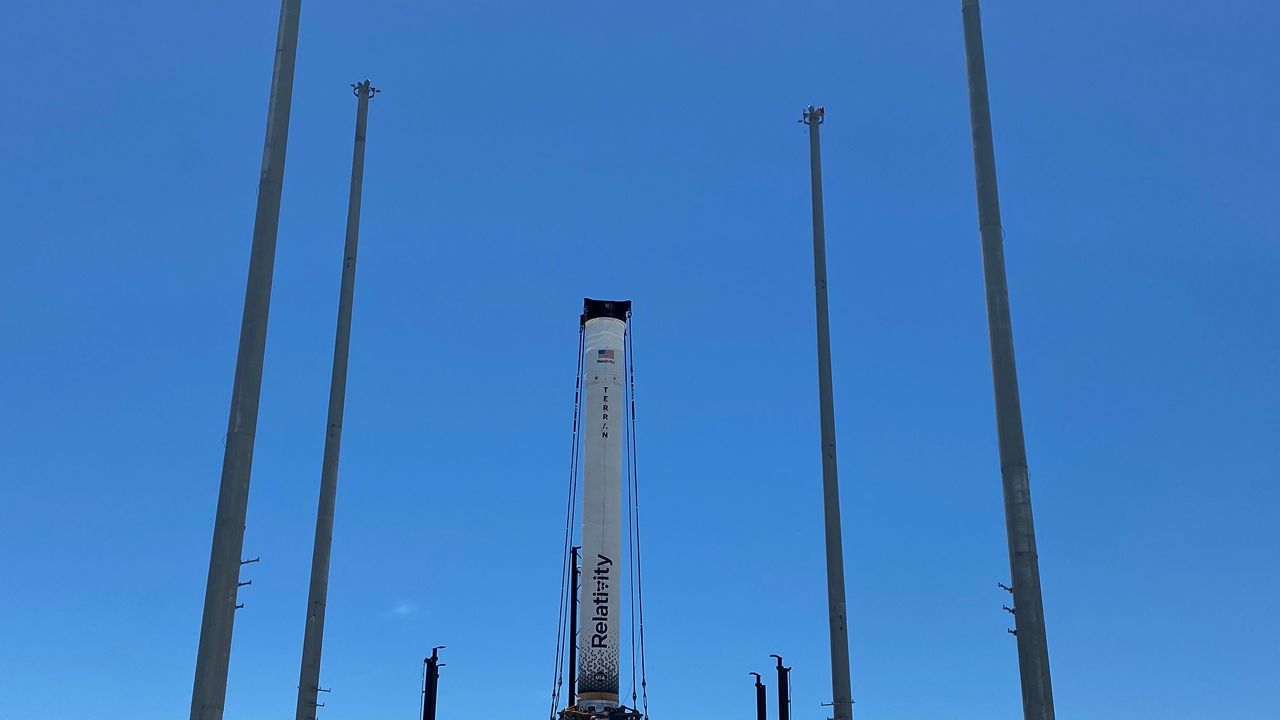 The first stage of Relativity Space's Terran 1 rocket stands tall at Launch Complex 16 at Cape Canaveral Space Force Station, ready for more testing before it's integrated with the second stage and nose cone ahead of its first flight. (Spectrum News/Will Robinson-Smith)

The engineering technique is used to create Rocket Lab’s Rutherford Engines, which have powered its Electron rocket since 2017. In 2014, Aerojet Rocketdyne first tested its 3D-printed Bantam engine, announcing a revamp in 2017. United Launch Alliance (ULA) began integrating additive manufacturing into its workflow in the early 2010s and launched its first Atlas V with Stratasys-printed components in 2016.

Soon, Relativity Space will make a large leap forward in the industry by launching the first majority 3D-printed rocket: Terran 1.

“I’ve always worked here at the Cape, so it’s been kind of like a waiting game and now it’s here,” said Pam Garcia, the manager of launch operations for Relativity. “And you can’t help but get those butterflies in your stomach, knowing like, ‘Oh my God! It’s finally here! But also, oh my God, it’s finally here.’”

Garcia described her excitement as she drove past the launch pad on the way to Relativity Space’s hangar at historic Launch Complex 16 in mid-July. Right now, the first stage of Relativity’s new Terran 1 rocket is sitting patiently at the launch pad as crews put it through a number of tests.

In late July, the company announced an important milestone: it hot fired all nine of the rocket's Aeon 1 engines together for the first time.

Peek inside our first Stage 1 hot fire, bringing all nine Aeon 1 engines up to full power 🔥

The test marked another first not only for us here at Relativity, but also for aerospace manufacturing as an industry, with all engines and Stage 1 being 3D printed#GLHF pic.twitter.com/drpOYkEorz

With that complete, Relativity Space is moving toward conducting what’s called a mission duty cycle (MDC) test before the company integrates the first and second stages of the rocket.

“As we’re getting to our first mission duty cycle of stage one, it is an acceptance test. What’s important about that is prior to getting to launch, we want to verify that the system is performing to the expected range,” Garcia said.

“So, think of it as a preflight checklist. You want to make sure that every system is meeting its qualified data and that the engineers that worked these systems, the design engineers, are validating their data,” she continued.

Relativity previously performed an MDC test of one of its Aeon 1 engines at NASA’s Stennis Space Center (SSC) in Mississippi in December 2020. During that test, teams ran the engine at full power for 187 seconds, proving that the engine was able to “operate in a flight-like configuration.”

Long Beach-based Relativity Space was founded in 2015 by Tim Ellis and Jordan Noone with the ambition of not only creating rockets with additive manufacturing but also helping to put humanity on a path to becoming multiplanetary, a goal shared by other companies, like fellow launch provider SpaceX.

The enterprise began as a venture-backed startup and already had more than $1 billion in memorandums of understanding (MOUs) and letters of intent (LOIs) as early as 2018.

The majority of its additive manufacturing happens at its 120,000-square-foot headquarters and “Factory of the Future,” which houses Stargate, a collection of what the company describes as “the world’s largest metal 3D printers.

“We’re disrupting 60 years of aerospace, and what Relativity offers is a radically simplified supply chain,” Garcia said. “We’re able to build a rocket in 60 days with 100 times fewer parts because of our software-driven manufacturing and our 3D printing techniques.”

It’s building up its presence at VSFB at and around Building 330. Relativity also upgraded Launch Complex 16 at CCSFS, which was previously used to launch the following missiles: Titan I, Titan II, Pershing 1A and Pershing II.

Launching from a site with such rich history, Relativity Space is looking to build on its own legacy as it moves forward with 3D-printing rockets. With each successive launch of the Terran 1 rocket, Garcia said the company aims to make more and more of the rocket using its additive manufacturing capabilities.

“Different than some other industry providers that have 3D-printed components, we are 3D printing not just our tanks, but also our engines,” Garcia said. “We are reaching towards a goal of a 95% printed vehicle. Currently, Terran 1 will be 85% printed by mass.”

#TBT bonus: In 1959, our Launch Control Center in Cape Canaveral, FL was where the first American space monkeys, Able & Baker, were readied for their flight on a Jupiter rocket. Their successful trip occurred two years before any humans flew into space. 🐒🐒

Garcia plays a pivotal role as part of the Florida team. After graduating from Embry-Riddle Aeronautical University, she first rose through the ranks of SpaceX to become the company’s first female certified-launch controller. Now as a leader at Relativity Space, she wears several hats supporting this and future launch campaigns.

“I am the manager of launch operations. I oversee our launch operations team, essentially our control team, our vehicle integration team and our launch supply-chain team,” Garcia said. “So, as one of the leaders in place, I have a lot of people that are looking for my direct leadership, whether that be something as simple as acquiring the right parts to make a final closeout happen or to direct a launch flow campaign.”

This first mission for the company will be a proving opportunity for both the rocket and the team at the Cape. Company officials opted to fly this first Terran 1 rocket without a payload and will have a nose cone at the top of the integrated vehicle, instead of payload fairings, which will be featured on the next launch.

“Part of what we’ll be doing is our first nose-cone-to-stage-two-mate. So, it’s a lot of fit up, verifying that the two ends are able to come together,” Garcia said. “It will give us good practice for the fairing missions that are to come.”

Because this launch won’t have a customer payload, the company named the mission “Good Luck, Have Fun.”

But more than just enjoying the launch, this mission will give the team valuable insight as members prepare for launch No. 2: a mission that is part of NASA’s Ventura Class Launch Services Demonstration 2 (VCLS Demo 2) contracts.

It was one of three companies selected in 2020 by NASA’s Launch Services Program (LSP) at Kennedy Space Center to launch a series of SmallSats in support of the CubeSat Launch Initiative (CSLI):

Relativity’s second mission is the Educational Launch of Nanosatellites (ELaNa) 42, according to an August 2021 LSP presentation. At that point, NASA noted the launch date was NET late Q2 CY 2022.

It will launch one more, currently undisclosed customer, before the Terran 1 goes through a block upgrade to convert the rocket from using nine Aeon 1 engines to using a single Aeon R engine.

In January 2022, NASA awarded Relativity Space’s Terran 1 rocket with another launch contract, this time, as one of 12 Venture-Class Acquisition of Dedicated and Rideshare (VADR) missions.

Terran 1 also has a number of other contracted launches forthcoming, including with rideshare company Spaceflight, Momentus, and Iridium.

Even with all the buildup and work being done with the Terran 1 rocket, Relativity Space is putting significant work into its second rocket: the 3D-printed and fully reusable Terran R rocket.

The company aims to start launching it beginning in 2024. It is capable of carrying 20,000 kilograms to low-Earth orbit, 20 times as much as the Terran 1.

As of June, five customers had signed on for missions using Terran R, like the multilaunch deal with OneWeb to support its growing communications satellite constellation, which represents about $1.2 billion and includes multiple launches.

Arguably, its most ambitious mission announced is a partnership with Impulse Space to “deliver the first commercial payload to Mars.”

Garcia said it’s an important next step not only for the company and commercial space exploration, but also for the advancement of additive manufacturing, both on and off Earth.

“3D printing opens up that path to us. If we’re able to 3D print a vehicle, we can then expand that technology to other infrastructure, other technologies that allow us to build that base on Mars and beyond,” Garcia said.