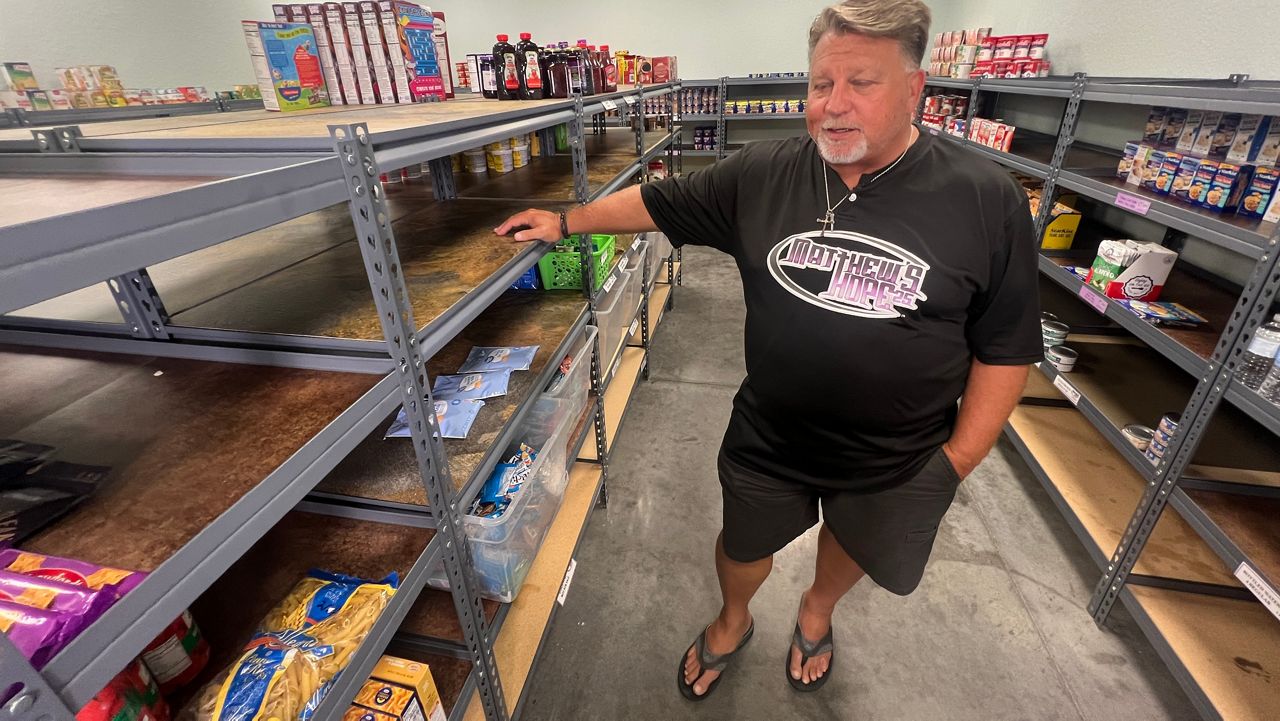 Matthew's Hope founder and CEO Scott Billue says the organization's food pantry is struggling to keep enough food on the shelves to help the people who count on it. (Spectrum News 13/Nicole Griffin)

While much of the country is feeling the impacts of inflation, cost increases are especially hurting those dealing with food insecurity, and the people who work every day to help them.

Officials with Matthew’s Hope, a homeless outreach ministry in Winter Garden, said that their costs are skyrocketing with inflation, and it's making them wonder how long they can keep up.

Matthew's Hope founder and CEO Scott Billue said he works tirelessly to keep the shelves of his food pantry stocked.

“Well, the problem is we can’t keep them filled,” he said.

He said he's seen some lean times in the 13 years since Matthew's Hope opened, but this is different.

“Never have I seen it like I have the way we are seeing it now," said Billue.

A few cans of ravioli are all the pantry has left to try and restock the shelves that help feed 425 people a week.

“That number just keeps growing," said Billue. " We're adding about 35 people a week right now and I can't tell you is how much of its inflation driven.”

Billue says not only is inflation causing more need, but it’s causing their donations to drop off — and that's on top their own expenses jumping by about 35% in the last six months.

"It's just empty," Billue said of the pantry.

He said it's unfortunately turning into a heart breaking new reality.

“Because this is not just an empty shelf to me," said Billue, surveying the food pantry. "This is what's going to happen, is next time people walk in here, this was groceries they're not going to have”

Despite bare shelves, in his office receipts continue to pile up. According to his math, Billue said the organization has spent nearly $760,000 on food, hygiene items, medical supplies and clothing — all of which go toward helping more than 1,500 people a month.

“It becomes overwhelming," he said. "As silly as it sounds, I've cried over these things. Because you just sit there, you kind of go it's like somebody's sitting on your chest and you're sitting there going how do we do this?”

Their costs have risen so much, Billue said Matthew's Hope is running in a deficit of about $150,000, causing them to pull money from their general budget, which is usually reserved for other bills, for the first time ever.

"I mean you can tie it to inflation like a string,” said Billue.

He said wondering how long the organization can survive like this has been keeping him up at night.

“We’re going to be here for as long as we can," Billue said. "And when we can't everybody will know it."

Billue claimed they’ve more than doubled their donor base over the last two years, but the donations they’ve received in the last six months is about half of what they are used to getting. He’s hoping as inflation numbers improve, so will their donations.

For anyone who wants to help the Matthew’s Hope food pantry, they are most in need of single serve SPAM, Vienna sausages, and canned pasta. You can learn more about donating on the Matthew's Hope website.