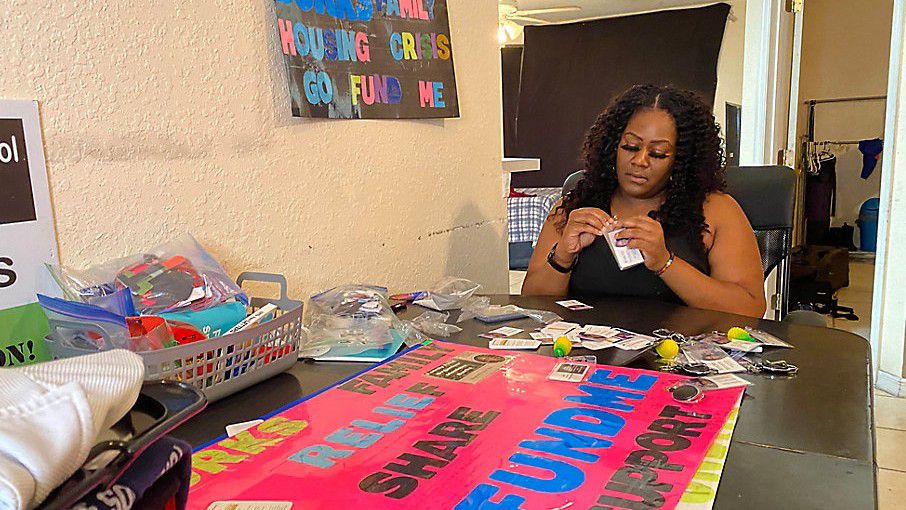 Monique Burks works on promotional materials she and her kids designed for their GoFundMe campaign on June 21, which she created to fundraise for their permanent housing costs. (Spectrum News 13/Molly Duerig)

POINCIANA, Fla. — Although Monique Burks was smiling as she and her daughter packed up a box of kitchen supplies one late June afternoon, her mind wasn’t exactly at ease.

“It’s sad to pack away all our memories and not know where we’re taking them,” Burks said.

After years of renting the same single-family home in Poinciana, she learned earlier this year that her landlord intended to sell the property. He told her that Florida’s property taxes and spiking homeowners’ insurance premiums simply became too much for him to handle, especially with the low cost of rent he’d charged Burks for years: $1,000 for the three-bedroom, two-bathroom house.

Burks, who works for a vacation home rental company, understood her rent was due to increase based on inflation. She says she prepared financially to handle an increase of several hundred dollars.

But finances aren’t Burks’ only barrier to safe, affordable housing for her family. She said an 11-year-old, drug-related felony charge she already served jail time for continues to haunt her, denying her access to rental options that she’d otherwise qualify for.

Many private housing providers engage in this kind of criminal background screening, despite not being legally required to do so, according to a staff memo the Department of Housing and Urban Development’s (HUD) fair housing office issued last month. Sometimes, these types of screenings could be considered illegal discrimination under the Fair Housing Act, the memo said.

“Criminal history is not a good predictor of housing success,” that memo warned, citing prior research that found no significant differences in housing outcomes between people with and without criminal histories.

Yet, in the last seven months, Burks said her criminal history has been one of the main reasons she has been denied affordable housing for herself and her family. She said her family has looked at more than a hundred rental properties, and five real estate companies have denied her.

As she packed up that late June afternoon, Burks and her six kids, including two sets of twins, didn’t know where they were going next. All they knew was they had to leave their current place, and soon.

“I can’t break and fold, because (my kids) need me,” Burks said. “That’s what keeps me going.”

Large real estate corporations now own a significantly bigger portion of America’s rental housing stock, a growing trend ever since the post-2008 foreclosure crisis. But at the end of last year, investors broke records, making up more than 18% of all the country’s home purchases, according to Redfin data.

In the Orlando metro area, investors bought up an even bigger chunk: 25%.

But in the two zip codes comprising Poinciana, where Burks has been searching for rentals, investors made an even bigger impact, accounting for nearly half of all home purchases on average in 2021’s last quarter. That’s according to data Redfin provided to Spectrum News.

Some real estate companies buy properties with a mission to restore existing rentals and preserve housing affordability for vulnerable populations — Jacksonville’s Ability Housing is one such example.

But many others that lack an intentional mission simply aim to flip properties and raise rent to bring in more profit. Over time, experts say that can lead to higher average rents in an area.

Burks herself has noticed more investor activity in recent months, as she’s driven around Poinciana hunting for rental properties.

Usually, a few of Burks’ kids will come along to look out for any homes with a “for rent” sign posted out front. They’ll take pictures and jot down phone numbers while Burks drives.

But mostly, Burks said, their searches come up dry.

“You really don’t see a lot of private owners like you used to — you don’t see those signs anymore,” she said. “It’s all real estate (companies).”

And Burks says those companies don’t see past her criminal record.

“A lot of times we really want those with private owners,” she said. “We stand a better chance.”

On June 23, just a few days after Spectrum News accompanied Burks and her kids on one of their rental quests, Burks finally received a “yes.” It was from H.O.M.E., a Kissimmee-based homeless services provider that helps place single moms in temporary, or “bridge” housing.

Burks and her six kids recently moved into a temporary, two-bedroom rental the program could find. Ideally, they’ll be rehoused in a more permanent situation as soon as possible, but much depends on public housing funding, help and availability, which is infamously limited across the United States.

“I’m working, and I like to pay my rent, but we really don’t have a choice,” said Burks, who says the $18 an hour she currently earns isn’t low enough to qualify her for many public help programs.

She says, for example, she lost the family’s access to food stamps earlier this year.

Yet that $18 an hour also often isn’t enough to prove Burks earns at least 3.5 times the rent: an increasingly common requirement among housing providers. Her hourly wage comes out to about $38,000 annually, which is $13,000 less than what Burks would need to afford a modest, two-bedroom rental in her zip code, according to the National Low Income Housing Coalition.

When Burks and her kids learned they had to leave their home, they faced an uncertain scenario. But unlike so many other Florida renters in similar situations, they at least had time on their side.

Eviction law moves rapidly in Florida, often giving renters very little time and recourse to respond before losing their homes. Fortunately, though, an official eviction never had to be filed in Burks’ case. Her landlord Steve Tate, who’s based in England, originally gave Burks notice back in January, but kept pushing back the timeline, as he didn’t want to make the family’s struggle any worse.

“I haven’t set her a deadline — I’ve tried to be as reasonable as I can,” Tate told Spectrum News in late June. “But I simply need to sell that property.”

Tate described Florida’s property insurance premiums as “extortionist,” mirroring frustrations many others have expressed about the state’s disproportionately high cost of homeowners’ insurance.

As of June 28, Burks and her family moved into the temporary place. She was told they can stay for 90 days, but was advised to save up as much money as possible for permanent housing. Tate told Spectrum News he would support any help she can get to help her find a permanent home.

Burks has a GoFundMe she’s created to help raise money for the family’s housing expenses, which you can visit here.

GoFundMe.com, or any other third-party online fundraiser, is not managed by Spectrum Bay News 9 or Spectrum News 13. For more information on how GoFundMe works and its rules, visit http://www.gofundme.com/safety.