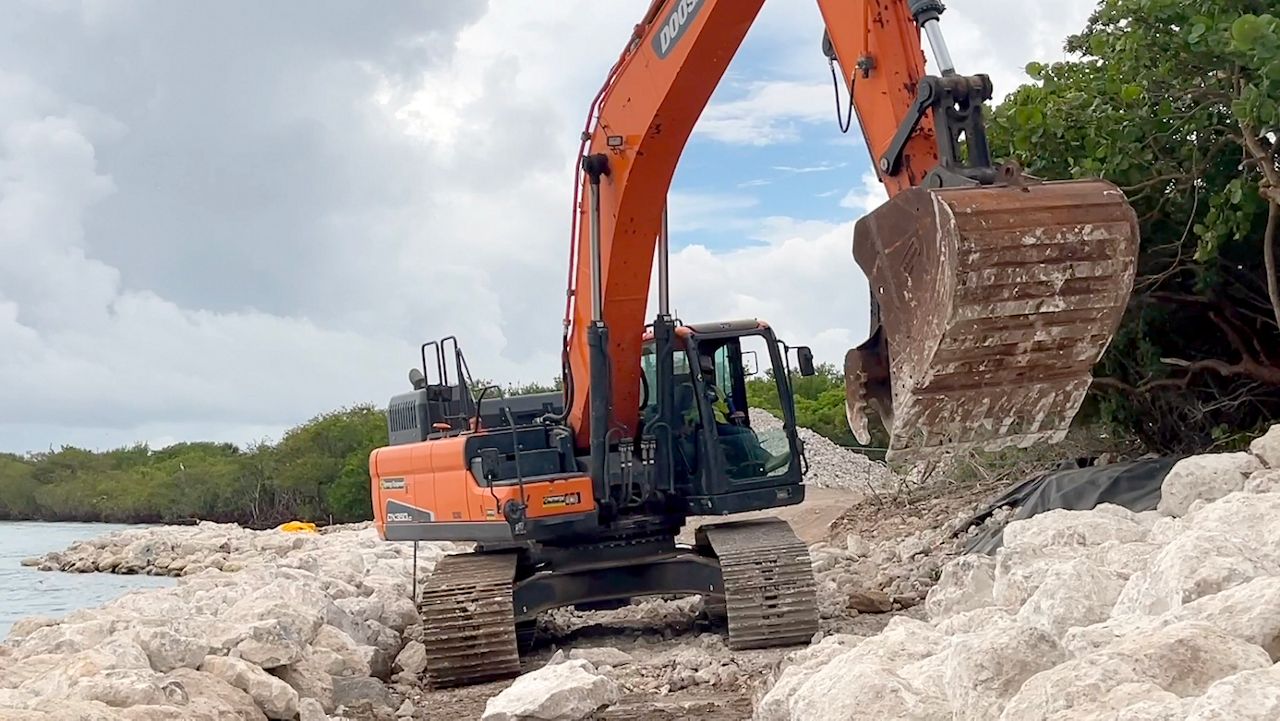 Crews work to repair a hurricane-damaged shoreline as part of a project at Sebastian Inlet in Brevard County. (Spectrum News 13/Greg Pallone)

BREVARD COUNTY, Fla. — A hurricane-damaged Brevard County shoreline at Sebastian Inlet is getting a big makeover.

It's easy to hear the noise in Sebastian Inlet State Park where crews use heavy equipment to move tons of rocks into place on a new shoreline stabilization project.

"This project has been designed in a way to not only stabilize the shoreline, but also to continue to offer recreational use," said Sebastian Inlet District executive director James Gray, Jr., who is overseeing the project.

Gray said this project is right down his alley.

As a teen, he was first exposed to coastal engineering after going to a job site with his father — a large breakwater project on a New Jersey beach.

"Drawn to the water, drawn to construction and drawn to engineering probably in that moment," he said about that experience.

Many of his moments of late have been spent at Sebastian Inlet, the north shore at the end of Cove Road was damaged by Hurricane Dorian in 2019.

Nearly 700 feet of it was eroded away by the strong winds and rain.

Gray said the rock-assembling technique crews were using is kind of like putting together a puzzle — a strong puzzle.

"This stone is more on the bedding stone size, so this goes underneath the large armoring rocks," he said describing one of the smaller stones. "It's large, but not too large for people to walk over."

Hardening the shoreline isn't the only improvement the project entails: Mangroves will appear in the coming years.

"Mangroves will naturally float in and interlock with this rock, and in about 10-15 years we will have some volunteering mangroves as part of this project," Gray said.

So far, he said everything is going as planned.

For Gray, he wants a safe place for the 900,000 inlet visitors who come to fish, wade in the water and boat each year.

"We want to make sure we maintain that recreation in a positive light," he said.

The shoreline project is expected to wrap up at the end of August.