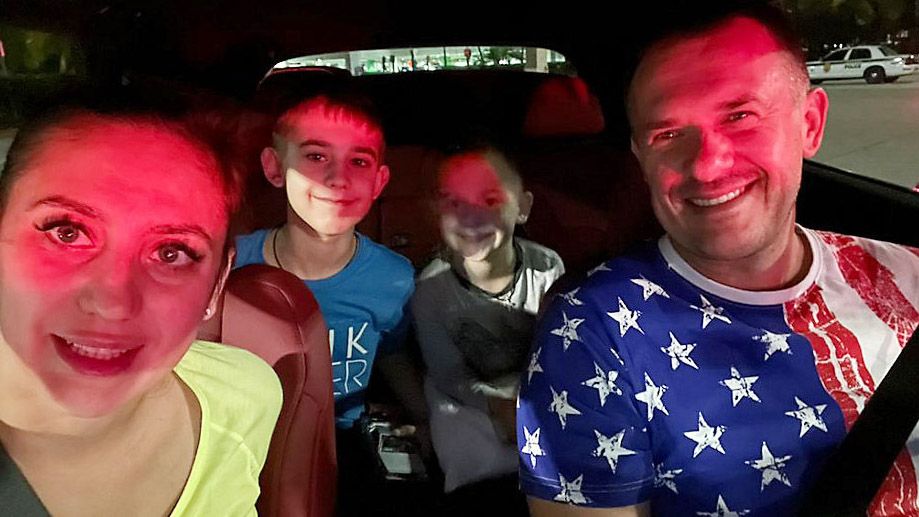 Neighboring countries around Ukraine are opening their borders to allow Ukrainians in.

Iryna Naraievska spent nearly five days in her car after leaving her home near Kyiv before finally making her way in to Poland.

She made this journey all on Ukraine back-country roads with her two sons in the backseat, as well as driving through three countries before reuniting with her husband here in the states. Her husband was already in Florida for work several days before an attack the initial attack on Ukraine.

On the day Russia began their attack on Ukraine, Iryna’s sons were playing in her back yard.

They froze when they heard air strikes near them.

“Strikes kept coming,” Iryna Naraievska says through an interpreter. “When it continued, it was a night of bombing, so all of the night they were hearing bombing explosions.”

Soon after realizing her country was under attack, Iryna took her two boys and spent the next 30 hours in her car, driving out of Kyiv to Ternopil, and Bukovel. They then entered Hungary and continued on to Slovakia to get to Poland, where she was able to catch a flight to Miami. She is relieved, but also carries sorrow.

“Exhaustion, and fear,” Naraievska says. “I spent several days traveling from Ukraine to Miami, plus time difference, plus my kids, plus the acknowledgment I lost relatives, my property, everything.”

Now in South Florida she is happy knowing her two children are safe and with her and her husband. The car ride out of Ukraine was nothing short of nerve-racking.

“At the end of our first day driving we were in the middle of our country,” the mother of two explains. “My back view mirror in the car was always seeing bomb explosions, all the time, all the evening.”

This family’s home will never be the same, and she honestly doesn’t know if and when she will be able to see it again.

Iryna’s family had a vacation to Florida planned months ago, and they were supposed to  this Saturday. According to Iryna, since all their papers were already in order to come, they did not have a difficult time leaving Poland to get to the United States. She is with her husband and friends now in South Florida.