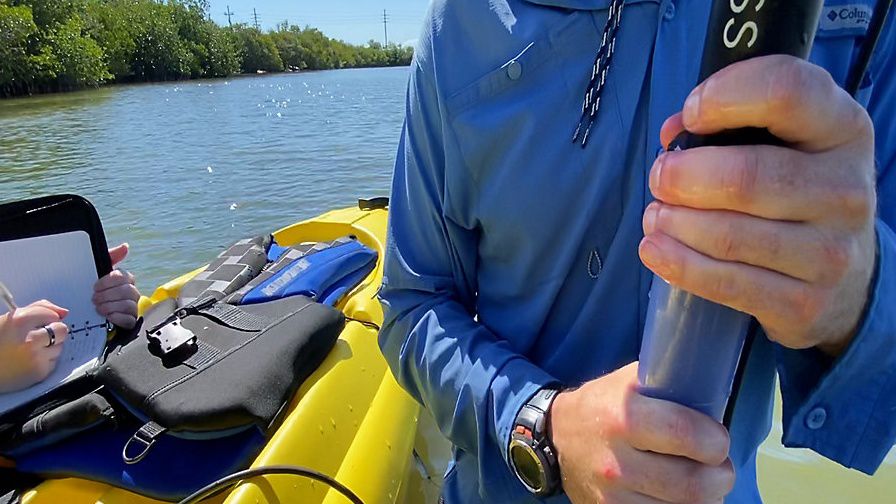 Reversing the impacts of human development on the Indian River Lagoon has been a massive undertaking for years, but researchers believe that one solution could be as nearby as the ocean on the other side of the barrier island.

An initiative called the Restore Lagoon Inflow (RLI) research project is underway in Brevard County. The state-funded undertaking is being spearheaded by researchers at Florida Tech.

Dr. Austin Fox, an assistant professor in Florida Tech’s department of ocean engineering and marine sciences, serves as a principal investigator for this work. He was busy Friday collecting another round of water samples near Port Canaveral.

He said that one of the more overlooked and under-researched aspects of the lagoon’s health lies in the sand, which makes up about 90% of the lagoon bottom and the helpful bacteria that live in it.

That bacteria naturally help remove things like nitrogen and phosphorus from the water.

“You can think of them like a probiotic. Healthy sand has good bacteria living in it that helps to actually remove some of those nutrients,” Fox said. “And so, at 90% of the lagoon bottom, we believe is helping to remove nitrogen from the lagoon and help balance out those inputs.”

Human development, like widening the barrier island and constructing causeways has, overtime, create pockets of the lagoon where water tends to stagnate more than it naturally would, Fox explained.

The idea that they’re exploring is to introduce a limited amount of ocean water on an ongoing basis to restore some of the natural balance that existed decades ago.

This possible solution being studied is an attempt to undo decades of impact on the lagoon, the effects of which are now starting to become more and more apparent.

In 1922, a massive excavation project that involved draining 40,000 acres of St. Johns River marsh land to establish Palm Bay brought an unnatural amount of fresh water into the lagoon.

A 2016 diversion project of the major C1 canal was done to help fix the impact of this, but it wasn’t able to reverse what had been done.

Fox and his colleagues recently completed the second phase of this multi-year undertaking. He said their work has also brought to light more information about the muck that has also been shown to be problematic.

“The work we’re doing has actually identified that not all muck is the same. There’s muck that if you just look at it, you may not be able to tell the difference, but there’s some muck that’s 20 times worse in terms of nutrient inputs than other muck,” Fox said. “And so the work we’re doing has been able to help guide some of these restoration efforts. We’re getting 20 times more benefit by focusing on some of these worst offending areas.”

The 2020 Phase 1 assessment noted that $800,000 in funding came from the Florida legislature for this work. That step involved gathering baseline data and creating models on water quality. Phase 2 included site selection, stakeholder engagement and more modeling.

The next step is to set up a demonstration of the pumping system to bring that data to legislators for further assessment.

“If that’s successful, then we can provide that data to legislators and to managers and then let them make a decision whether we want to see this happen, or whether they would like to carry it out on a larger scale,” Fox said.