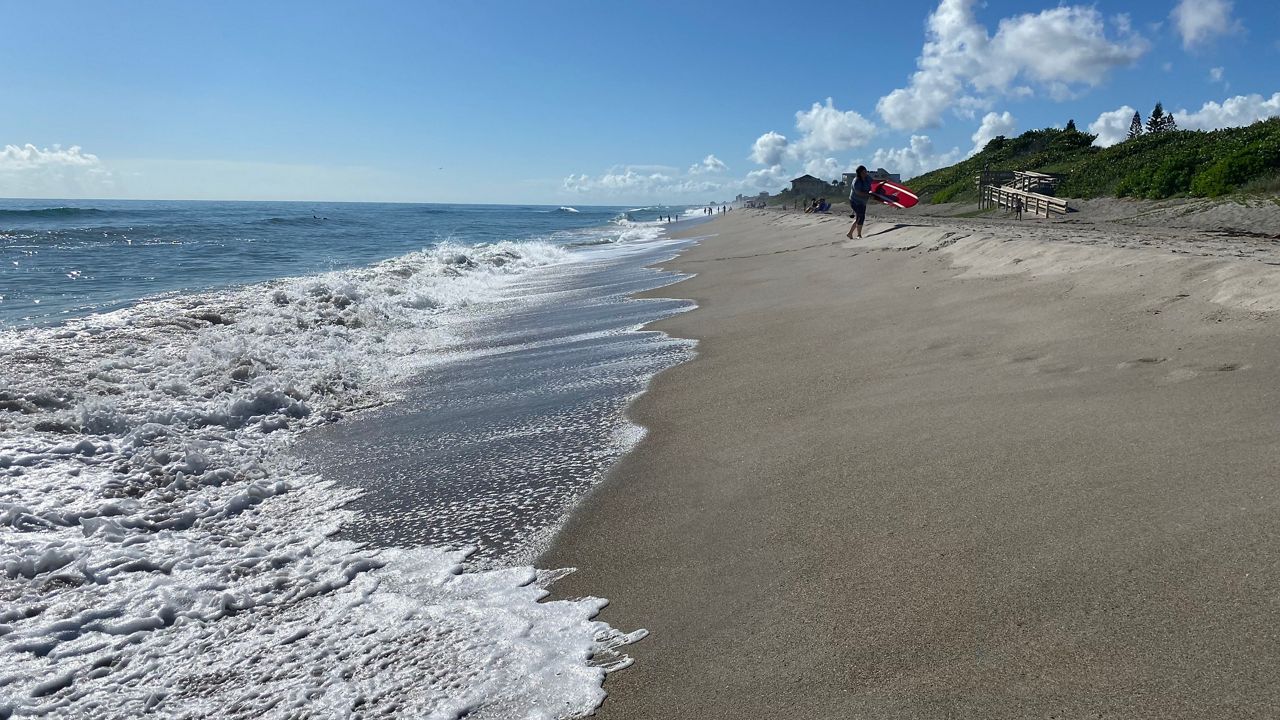 Costal communities like Satellite Beach in Central Florida are using the latest climate change reports to try and stay ahead of things like rising sea levels. (Spectrum News 13/Will Robinson-Smith)

SATELLITE BEACH, Fla. — As the climate change continues to have ever greater impacts on the global community, one key area of research to watch continues to be the rising sea level.

Here in the U.S., this is key to understand because 40% of the country’s population lives within coastal counties. Added to that is the fact that sea level rise is not the same everywhere you go.

“Certain processes lead to the fact that we have this spatial variability," he said. "One of them is vertical land motion. So, in this particular area (referencing data from the Town of Grand Isle, Louisiana), the land is going down at the same time the water is going up.

"So, these two processes are compounding each other, leading to a much higher scenario of what we call the relative sea level rise.”

He said this type of scenario is especially concerning, since they will threaten the infrastructure of some coastal communities.

Wahl came to the U.S. from Germany where he earned his Ph.D. in civil engineering from the University of Siegen. He’s worked with UCF since 2017 and heads the Coastal Risks and Engineering (CoRE) Lab, which studies things like coastal engineering design concepts, sustainability for humans in coastal zones and climate adaptation.

Last month, he joined a team of researchers backed by a $20 million award from the U.S. National Science Foundation to develop a Megalopoitan Coastal Transformation Hub, which is designed to “create climate-resilient decision-making frameworks to equitably support coastal communities.”

They’re focusing their modeling in the area ranging from New York City, through New Jersey to Philadelphia and will eventually model other regions.

Even if the globe stopped emitting greenhouse gases, Wahl said there would still be some element of sea level rise that would continue because of prior emissions.

He said it’s a positive change that the U.S. is once again part of the Paris Agreement, which aims to limit global warming to less than two degrees Celsius compared to pre-industrial levels.

However, he said the country is not moving quickly enough toward that endeavor of reducing emissions.

“Right now, the trajectory that we are on makes it harder to achieve the Paris goals," Wahl said. "It’s still something we can do, but it really requires significant action very, very quickly if we want to achieve that target."

“From a coastal adaptation point and coastal risk point of view, the difference 20 cm, plus or minus, makes is a huge difference in how sea level rise could impact coastal communities,” Wahl said. “The amount of sea level rise we’ve seen on global average over the last 150 years or so, is roughly 25 cm or so. And we already feel severe impacts from that.”

He pointed to increased storm surge and more extreme flooding events from smaller storms as examples of some of those impacts.

Wahl and some of the Ph.D graduate students he’s working with are working to create better data about the impacts of storm surge by working to fill in historical gaps in tide gauge data through a Database of Global Storm Surge Reconstructions (GSSR).

This research is being funded by an Early Career Investigator Award from NASA.

The space agency also works closely with the Intergovernmental Panel on Climate Change (IPCC) to create tools to help both researchers and governments have a better understanding of sea level rise projections in their communities.

The latest version of the Sea Level Projection Tool is based on the recently published Sixth Assessment Report on climate change.

Coastal communities, like Satellite Beach in Central Florida are using the latest data they get to craft adaptation solutions, if they have the funding and support for them.

City Manager Courtney Barker said the city has undertaken several large projects over the past several years, like installing significantly larger storm drain pipes in some areas that will be able to handle the amount of projected water they’ll need to manage in 50 years.

They’ve also nearly finished constructing a new public works building that sits on higher ground and is far more spacious than the previous location, which would flood regularly. Both it and the fire station are positioned at these new sites to better protect them in the long term.

They’re now in the process of going to residents to talk about changing the building codes to raise up certain properties that will be more vulnerable to flooding as time goes on. But talks about changing the aesthetic of a community, even to preserve it from potentially devastating impacts is not an easy conversation.