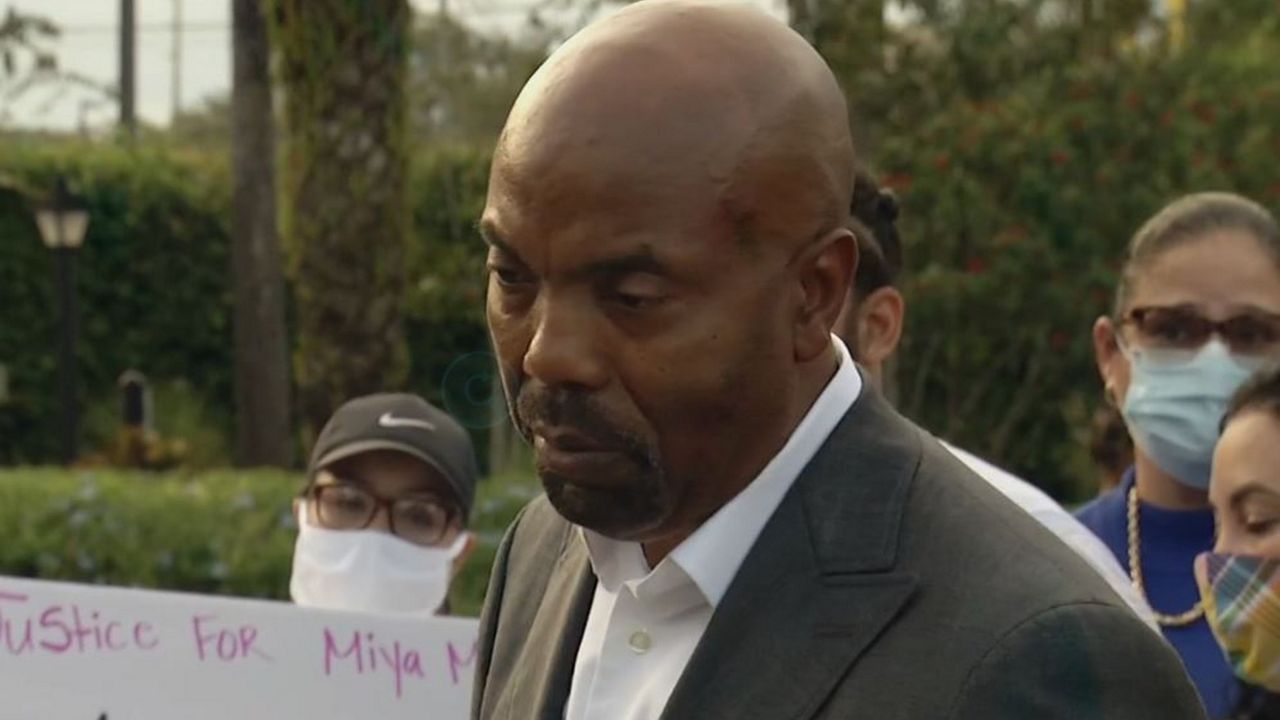 'We have said from the beginning, anybody responsible — who played a part in Miya’s death — will be held accountable,' says Daryl Washington, the attorney for Miya Marcano's family. (Spectrum News/Asher Wildman)

Daryl Washington, the attorney for Marcano's family, said Wednesday evening that family members were disappointed with their first interaction with an Orange County sheriff’s deputy at 4:54 a.m. Sept. 25 and feel more should have been done at that time.

In a video released by the family, Armando Caballero, who the Orange County Sheriff's Office has identified as the suspect in the 19-year-old's death, can be seen speaking with a sheriff's deputy at 4:54 a.m. Sept. 25, more than seven hours after Marcano's mother called OCSO to report she could not reach her daughter.

The family’s attorney met with the media on Wednesday at about the same time that Mina held a news conference to outline a timeline of Marcano’s disappearance.

Here is the official timeline released by the Orange County Sheriff's Office:

2:14 p.m.: The deadbolt to Miya Marcano’s apartment opened by on-call maintenance key fob known to be in Caballero’s possession.

4:34 p.m.: The deadbolt to Marcano’s apartment was opened by on-call maintenance key fob.

7:11 p.m.: Caballero contacted the apartment o­ffice staff and asked to be let in the gate (The OCSO timeline indicates this was an attempt to establish an alibi.)

7:16 p.m.: Someone used Marcano’s key fob to swipe the exterior lock to her apartment, but does not enter

7:38 p.m.: Caballero left the area of Arden Villas in his vehicle.

9:42 p.m.: An OCSO deputy was dispatched to Arden Villas apartments and arrives at 10:02 p.m. to check on Marcano’s well-being.

1:36 a.m.: Marcano's name was entered into the OCSO system as a missing person.

8:47 a.m.: The Casselberry Police Department responded to Caballero’s apartment after a call from Marcano’s family reported Caballero was seen with a glove, backpack and pink blanket.

9:52 a.m.: Casselberry police officers stand by while Marcano’s family looked through Caballero’s apartment with his permission.

3 p.m.: Caballero left his apartment. This was the last time he was seen.

5:44 p.m.: OCSO detectives secured Caballero’s apartment as they wrote a search warrant to submit to a judge.

In the video the family presented, which was shot early Sept. 25 by a member of the Marcano family, family members can be heard pleading with the deputy interviewing Caballero that Caballero was involved somehow with her disappearance and accusing Caballero of being obsessed with Marcano.

“There is evidence of obsession,” a family member can be heard saying. “You are fascinated with Miya."

Caballero can be heard replying, "This is just not on my side.”

In the video from the encounter at 4:54 a.m. Sept. 25, Caballero also tells the deputy why he is at the complex, where he also works, when he is not scheduled to be there for work or to be traveling there for work.

“We are concerned,” Caballero states while someone is on his speakerphone.

According to the Marcano family attorney, family members informed the deputy at Arden Villas at that encounter early Sept. 25 that they saw Marcano’s blanket in Caballero’s car and witnessed a black backpack and a key fob fall out of his lap when exiting his vehicle.

At his own news conference, Mina disagreed.

“There is not enough there in that video or happened that night to establish an arrest or that this person has to be detained," Mina said.

According to Washington, the Marcano family has not received any reports or records of the investigation by the sheriff’s office. Mina said the investigation is still ongoing, even though authorities believe Caballero acted alone.

Rick Raymond, a former police officer and now a private investigator based in Daytona Beach, said he thinks enough red flags should have been set off at that 4:54 a.m. interview with Caballero by a sheriff’s deputy to start an investigation or at least detain Caballero. Raymond cited Caballero being at Arden Villas during hours when he was not scheduled to work and the fact that family members said they identified Marcano’s blanket in Caballero’s car and urged the deputy not to let Caballero leave the property that morning.

“When you have individuals, multiple individuals saying that item belongs to a missing individual and it is in this individual’s vehicle, to me, that would have told me immediately I need to talk to this guy,” Raymond explained.

Caballero was not detained and left the scene shortly after the encounter at 4:54 a.m. Sept.25.

“Remember, that deputy didn’t have all the information that we now have — a week and a half later," Mina said, "So, yes, all that takes time.”

Mina also said at that time there was no probable cause at the time of that meeting early Sept. 25. About two and a half hours earlier, at 1:36 a.m., Marcano’s name was entered in the sheriff’s office computer system as a missing person, according to the OCSO.

Raymond said he believes the first hours of Marcano going missing were the most crucial.

Marcano's family members are now grieving and continuing to look for answers.

“We have said from the beginning, anybody responsible — who played a part in Miya’s death — will be held accountable," Washington said.

The family plans to have a funeral for Marcano next week in the Fort Lauderdale area.

ORANGE COUNTY, Fla. — Protesters took to the sidewalks outside Arden Villas apartment complex Wednesday over safety concerns after the death of Miya Marcano.

Marcano, 19, lived at the complex and was last seen there before investigators found her dead nearby.

Neighbors, friends, family and even strangers called for more safety measures at the complex.

Ahead of the event, there was a petition circulating that contains a detailed list of demands of Arden Villas, at Change.org. By early Wednesday, it had more than 27,000 signatures.

At the #MiyaMarcano protest outside Arden Villas, @CarlosGSmith is here to show support. @MyNews13 pic.twitter.com/z4NINb4r7t

People are angry and grieving, which also fuels the passion to make the change, said Marcano family lawyer Daryl Washington.

“If you really think about it, people who are living in apartment complexes are going to sleep at night not knowing that there is someone who has free access to their apartment,” Washington said Tuesday. “And I think people are thinking about how serious of an issue that really is.”

It is because investigators believe the prime suspect, maintenance man Armando Caballero, used a master key to enter Marcano’s apartment. He was found dead later in Seminole County from an apparent suicide.

Washington said the family will fight for legal changes regarding apartment access and will launch a foundation in honor of Marcano.

“It’s sad that there are so many young ladies and women in Orlando and throughout this country living in fear,” Washington said.

“Young ladies should be focused on their schoolwork, but they’re getting ready to protest because they don’t feel safe,” he said ahead of the protest.

Some of the petition demands include

Spectrum News 13 reached out multiple times to Arden Villas management for comment about the petition, but has not heard back.