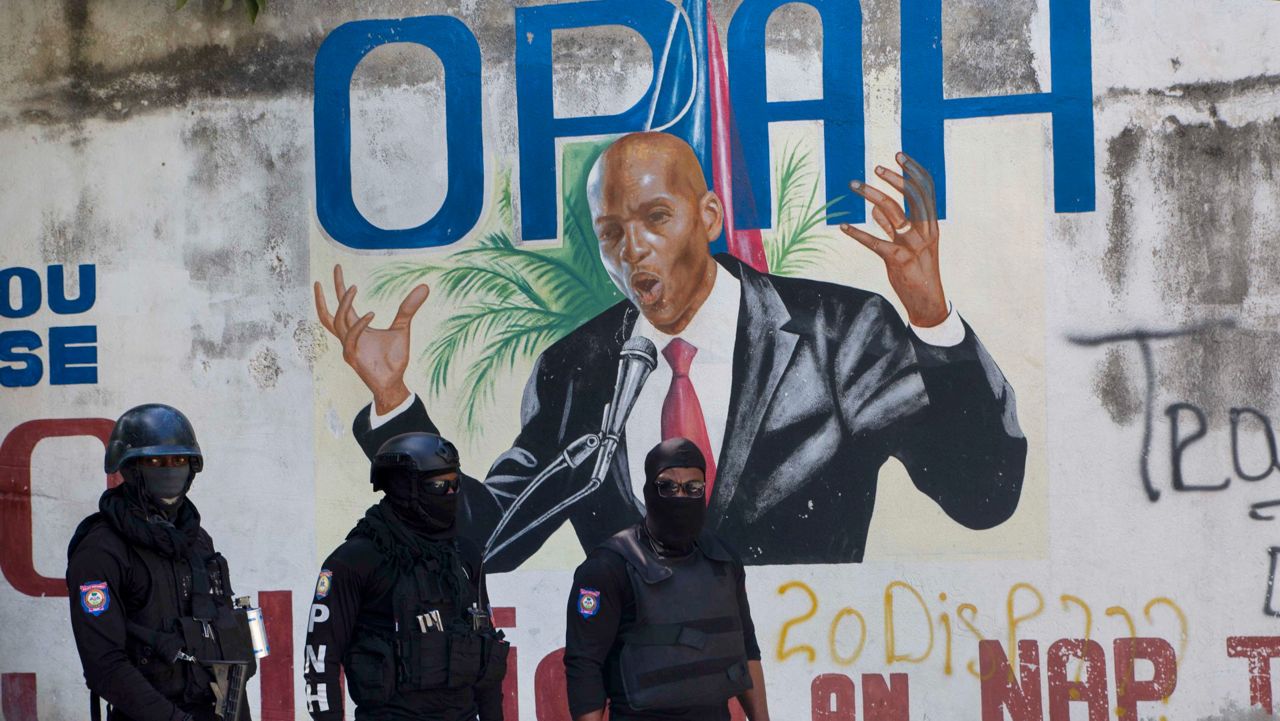 Police stand on guard Wednesday near a mural of Haitian President Jovenel Moïse, who was assassinated by gunman earlier that day. (AP Photo/joseph Odelyn)

STATEWIDE — With a sizable number of Haitian Americans among their constituents, Florida lawmakers reacted swiftly Wednesday to news that Haitian President Jovenel Moïse had been assassinated.

The killing of Moïse and the reported shooting and wounding of his wife, Martine Moïse, followed months of protests as opposition leaders demanded that Moïse step down.

Opponents contended that the president’s term ended in February 2021, and they reportedly suggested that he was putting Haiti on a return path to authoritarianism.

“The assassination of Haitian President Moïse was a horrific act and stands as a clarion call for swift and decisive action to bring political stability and peace to a nation in crisis,” U.S. Rep. Val Demings, D-Orlando, said in a statement on Twitter.

She called for “full transparency and an independent investigation” into the shootings.

Our statement on the situation in #Haiti. pic.twitter.com/M9tfwoZpPm

Demings in May joined three other members of Congress in announcing formation of the House Haiti Caucus. In a news release at the time, Demings quoted the four members as saying they would “lift and listen to the Haitian voices that must shape a democratic future that will serve all of Haiti’s people, not the few.”

With 39,000 Haitian immigrants, the Orlando-Kissimmee-Sanford metro area holds the fourth-largest such population in the United States, according to the Migration Policy Institute, citing 2018 data.

Orange County Mayor Jerry Demings, husband of Rep. Val Demings, offered Wednesday at the start of a coronavirus news briefing  "condolences to President Moïse’s family and to those residents here within Orange County who are from Haiti."

"That was very disturbing," she told Spectrum News. "It’s a sad moment for us."

Destin said she worries about the safety of her mother and family and friends who still live in Haiti. She said she also worries about "the poor people on the street” who lack help and communication amid widespread poverty, plus gang violence in the Capitol, Port-au-Prince.

Southeastern Florida claims by far the largest U.S. population of Haitian immigrants. The Tampa Bay area in 2018 carried the 10th-largest such population, with 9,000, the Migration Policy Institute said.

Rubio added that the assassination “will only bring more hardship to the people of Haiti and further destabilize the country.”

The cold blooded murder of the President of #Haiti in his home, in the middle of the night, has all the signs of a carefully planned contract killing carried out by foreign mercenaries.

Those behind this grotesque crime should be identified & brought to justice.

Reports said gunmen killed the president and wounded his wife in their home early Wednesday.

The assassination creates another crisis for Haiti, where President Jean-Bertrand Aristide resigned the presidency under U.S. pressure in 2004, where an earthquake killed at least tens of thousands of people in 2010 and where Hurricane Matthew killed hundreds and left widespread damage in 2016.

The shootings threatened to send the poorest country in the Western Hemisphere into deeper turmoil.

“It’s sad because a country that does need hope and help is now again at a place of pause,” said Tim DeTellis, president of Orlando-based New Missions, which says it establishes churches and services in Haiti and the Dominican Republic.

U.S. Rep. Frederica Wilson, a Democrat who represents parts of southern Broward and northern Miami-Dade counties, urged President Joe Biden to appoint a special envoy “who could play a role in facilitating the deployment of key diplomatic resources.”

In a statement, Biden said the U.S. “offers condolences to the people of Haiti, and we stand ready to assist as we continue to work for a safe and secure Haiti.”

U.S. Rep. Charlie Crist, D-St. Petersburg, wrote on Twitter: “I call for peace and unity during this difficult time.”