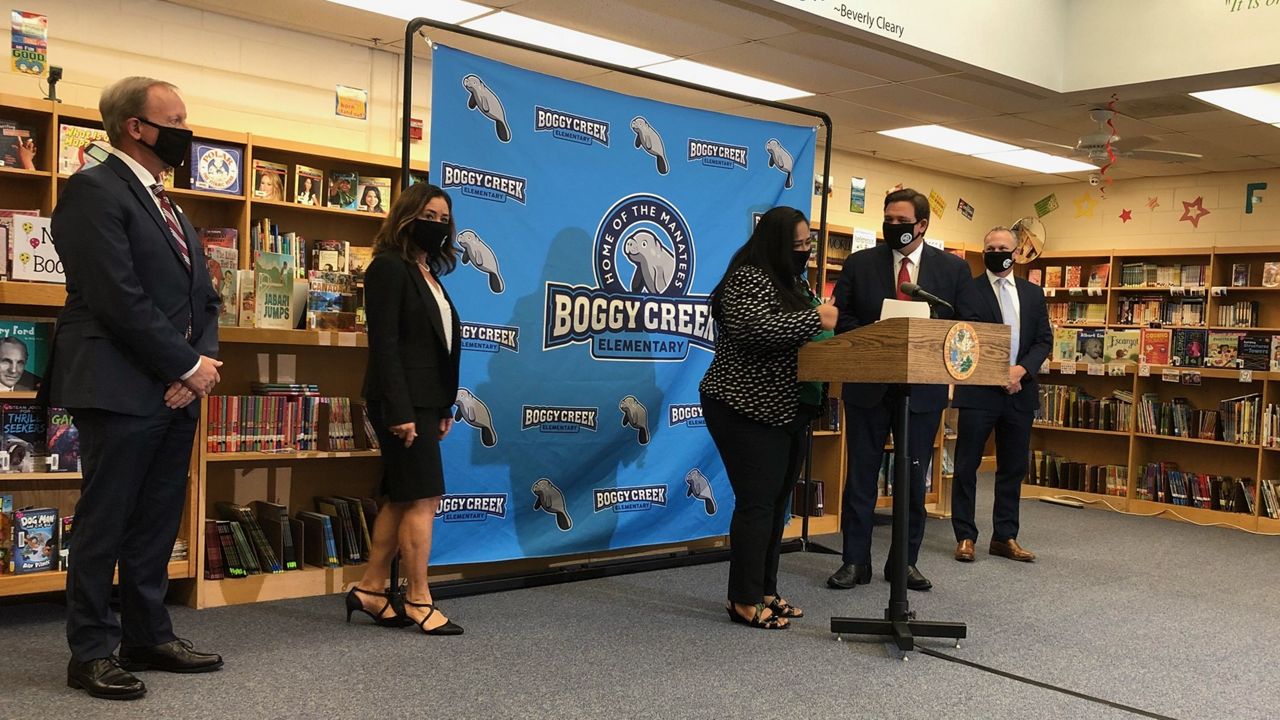 
“Schools will remain open for in-person instruction, and we will continue to offer parents choices for the spring semester,” he said during a news conference held at Boggy Creek Elementary School in Orange County.

School districts had been concerned that with fewer students under in-person enrollment, they would lose out on funding.

State Education Commissioner Richard Corcoran said virtual and hybrid options will be funded at the same levels as this year. However, districts who have seen growth in enrollment will get extra funding, while those districts whose enrollment has dropped because of the pandemic will get some unused CARES Act funds to mitigate any losses in funding.

In a released statement, Orange County Public Schools said, in part: "We appreciate Governor DeSantis’ and Commissioner Corcoran’s affirmation that we can offer parents the choice of LaunchED@Home or face-to-face learning for the second semester without a financial penalty to the district... We are also pleased that current year funding cuts due to enrollment shortfalls have been minimized and can be supplemented with CARES Act dollars. We will thoroughly review the Commissioner’s new Emergency Order to further clarify direction."

Volusia County Schools said it "will continue offering in-person instruction in the Traditional Classroom, as well as virtual options including Volusia Live and Volusia Online Learning for the spring semester, in keeping with the updated emergency order announced Monday by Florida Governor Ron DeSantis... VCS closely monitors students’ academic progress, and after a mid-term evaluation of grades, thousands of students returned to the Traditional Classroom option earlier this month. Currently, about 75% of VCS students are in the Traditional Classroom, 15% in Volusia Live (virtual, real-time, live streaming), and 10% in the Volusia Online Learning option (more flexible scheduling). Schools are working closely with families to provide interventions to help struggling students succeed."

DeSantis also said students who are struggling or failing while doing digital learning will be required to return to in-person learning — unless their parent or guardian strongly objects.

“The data and the evidence is overwhelmingly clear: virtual learning is just not the same as being in-person," DeSantis said.

Orange County mom Briane Griffis is one of thousands of Central Florida parents or guardians who have anxiously waited for months to hear the state’s decision as to whether all students would have to return to face-to-face learning in January.

“I think it was a great decision on having both options and choices for parents for their children’s education,” she said. “Blending it back in and not doing such a large jump definitely gives me piece of mind as a parent.”

Corcoran said for those students who can't return to in-person learning but are struggling, school districts will have to do "massive interventions" to help that child succeed.

He did not specify what that meant but said that would be up to each school district to decide.

Districts will be asked to submit plans to the state for approval on how they'll carry out these interventions.

When asked whether there were provisions in the new emergency order to make sure districts do this, both DeSantis and state Education Commissioner Richard Corcoran said they felt it wasn’t necessary.

“We have private schools, charter schools, particularly for the young kids, they don’t do the distancing, because ... there’s no difference in outcome," DeSantis said.

And while Griffis is glad all students won’t be going back at once, she’s still concerned with more inevitably going back — and more schools shutting down due to outbreaks, forcing her sons to go back to digital learning.

“Like we saw in March and April, it was very detrimental to both our jobs and his education to keep him home virtually,” she said.