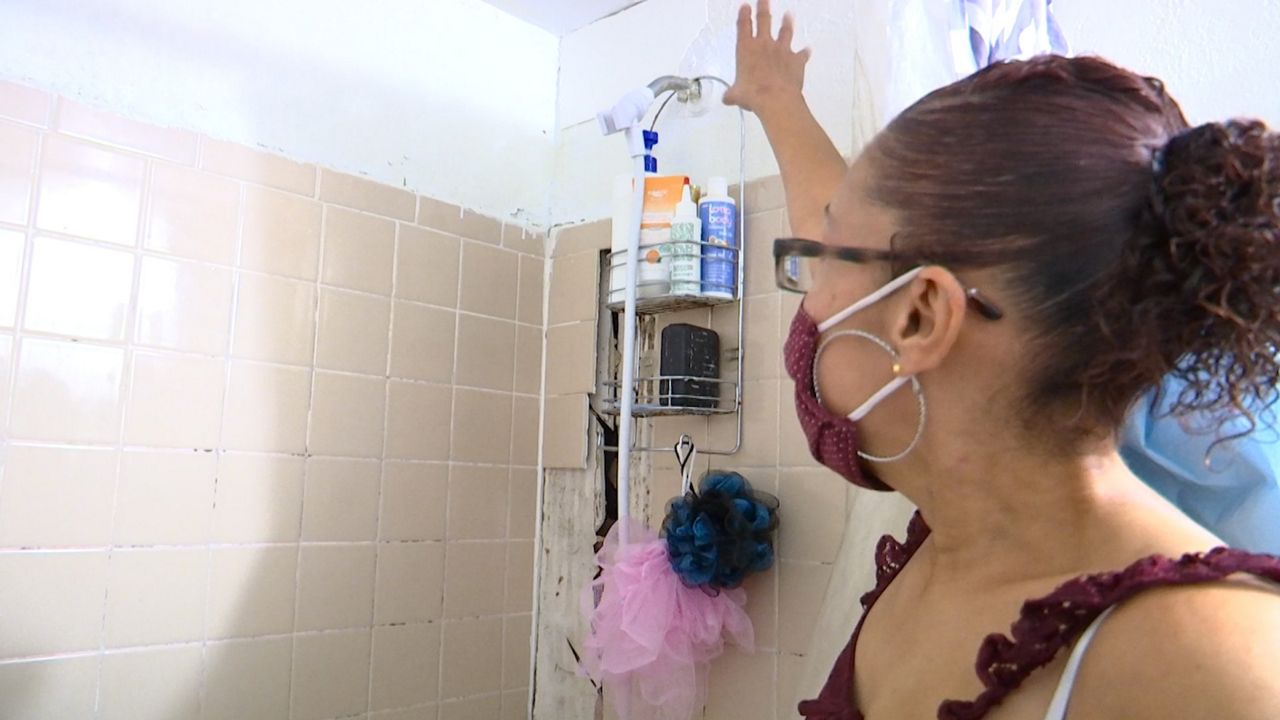 ORLANDO, Fla. – Mold. Flooding toilets. Roaches. A bathtub that clogs so quickly, you need to plunge standing water while you’re taking a shower.

These are just some of the abject living conditions residents of Riviera Villas say they have to endure. For months, they say a rotating cast of property management teams has consistently neglected tenants’ pleas for critical repairs – while still demanding they pay full rent. Rent that, for at least two residents, is more than $900 a month.

Figueroa has collected a paper trail of documents illustrating the issues she’s had since moving into Riviera Villas, a 42-unit apartment complex on Mercy Drive. Since February, she’s collected paperwork from five different property management companies that have taken over the property.

“It’s like a revolving door: one goes in, one goes out,” Figueroa said.

There’s also a note from The Children’s Lung, Asthma and Sleep Specialists in Winter Park, where Figueroa has taken her 14-year-old daughter and 12-year old son to be treated for asthma. Mold in the apartment is making their condition worse, said Figueroa, who suffers from asthma herself.

“Every effort should be made to remove the mold, replace air conditioning filters, clean air ducts, replace carpet and drywall and deep cleaning throughout the living environment,” the note reads. “If this cannot be done, it is recommended that the tenant be released from their lease without penalty.”

But on the contrary, Figueroa is now battling an eviction case. Together with other residents, she stopped paying her rent in August, protesting the dire living conditions.

“With the pandemic that we’re going through, we have to live so sanitary now,” Figueroa said. “How do you feel clean or sanitized in your own house when you have all these issues coming up?”

Riviera Villas has been a longstanding problem for the City of Orlando, according to Mike Rhodes, deputy director of the city’s department of economic development.

“They have not been very good property managers, and so we’ve had issues with them for some time, off and on,” Rhodes said during an interview with Spectrum News in September. “It’s gotten particularly worse over the past two months.”

Rhodes said the sewer system at Riviera Villas is old, and likely needs to be replaced entirely. In August the city’s code enforcement department cited the complex for sewage backups in two units, including Figueroa’s. Management was able to show the city they had fixed the issue, Rhodes said.

“We’ll see how long it lasts,” Rhodes said back in September. “It's time for a significant upgrade, and the owners are going to need to bite the bullet to do that.”

Now, the city’s code enforcement board has voted on a Nov. 13 deadline for management to bring several property violations into compliance. In the case of non-compliance, the city attorney will be authorized to begin lien and foreclosure proceedings, according to minutes from the board’s most recent meeting. Already the complex visibly appears to be on the verge of shutting down, with many apartments boarded up and deserted in the last two weeks.

Bathsheba Collingwood, another resident currently facing eviction, said her apartment has been in “deplorable condition” ever since she arrived in the spring. She didn’t have hot water for the first two and a half months she lived there, Collingwood said.

“We’re not crying for the luxury apartments. We knew where we were moving,” Collingwood said during a September interview with Spectrum News. “But we still need the bare necessities. That’s all we are crying for.”

7M Real Estate, the owner of the complex, has filed evictions against dozens of tenants since August, according to Orange County court records. Some, like Figueroa and Collingwood, responded in time to halt eviction proceedings and schedule court hearings, where they can plead their case.

But others haven’t been as fortunate. Figueroa said sheriff’s deputies gave her neighbors just ten minutes to collect their things and vacate their apartment on Tuesday. Now, Figueroa leaves a copy of the emergency order halting her eviction taped to her front door, just in case deputies return while she’s out.

Across the country, evictions for nonpayment of rent are still being filed successfully, despite the federal eviction freeze put in place last month by the Centers For Disease Control and Prevention. The onus is on tenants to seek protection under the order, by signing and submitting the CDC’s provided form to declare they have been financially impacted by the pandemic. And federal guidelines quietly released Oct. 9 clarify that landlords aren’t required to inform tenants of the CDC order. Landlords may also challenge the validity of a tenant’s declaration form, the guidelines state.

7M Real Estate said it tried to inform tenants of resources available to them, including Orange County’s eviction diversion program, but did not receive a response from most residents, according to court records. But several residents say that isn’t true, and that they never heard from ownership or management about any helpful resources.

Orlando Commissioner Regina Hill is now trying to close the gap, inviting the remaining Riviera Villas tenants to an emergency meeting Monday afternoon to discuss how management and residents can “move forward together.” There, local leaders will share information about pandemic assistance programs administered by the city and county, Hill said.

“Someone like myself that grew up in an area where there were slum landlords, it is my obligation to make sure that everyone has safe and quality conditions of housing,” Hill said.

Hill assured residents on Wednesday that there would be no more evictions at Riviera Villas until Monday. Her goal is to avoid more evictions and foreclosure proceedings at the complex, and to provide residents with a better quality of life, Hill said.

“My intention is to make sure that the tenants that are here, we create safe and equitable and quality housing for them,” Hill said. “And not to put them on the streets of Orlando.”

Figueroa said she hopes tenants will have a chance to speak at the meeting, scheduled for 4 p.m. Monday at the Northwest Neighborhood Center Gymnasium at 3955 W. D. Judge Drive.

“You have to understand, people get tired of waiting when you’re saying that you’re going to do something, and you don’t,” Figueroa said.