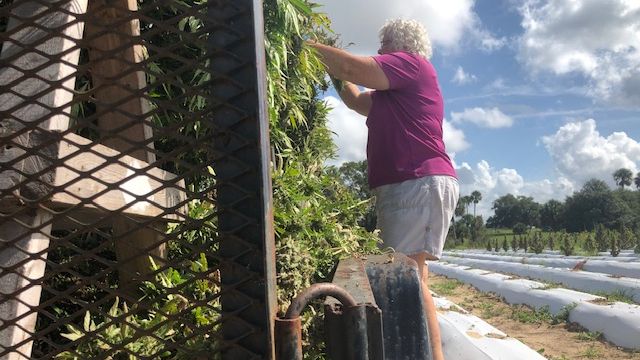 LAKE COUNTY, Fla. — For a group of Florida farmers in Lake County, this week is significant: It's time to harvest their hemp.

“The most floral aromas you’ve ever been around," said Michael Todd. "When we touch them, it releases more terpenes into the air."

Todd stands in the middle of a large field with rows upon rows of hemp, rising like mini Christmas trees plopped in white plastic mounds. He slips on a pair of blue gloves, bends down and carefully snips at the base of a plant.

He moves methodically down the rows, stooping, snipping, then stopping to chat with other farmers.

“We have three generations here. My son is the youngest licensed hemp farmer in the state of Florida," Todd said proudly. "Our neighbors and friends have been helping us the whole way through."

Neighbor helping neighbor is important because Todd and many others are first-time farmers building a new industry in Central Florida.

Stronger and Better Together

One year after Gov. Ron DeSantis signed the state hemp program into law under the Florida Department of Agriculture, the Florida Hemp Farmers coalition formed, spearheaded by Treadwell Farms and Jammie Treadwell.

“I feel like we’re much stronger and better together," she said. “A new industry requires a supply chain. Our idea was for this to be successful, we have to have from A to Z.”

In July, we visited Treadwell's nursery in Eustis, then bursting at the seams with cannabis seedlings and rooted cuttings.

There, rippled cooling walls dripped water, as massive fans pushed cooled air around the sea of green inside the greenhouse.

Farmers purchased plants from Treadwell's nursery, planting and tending to them in their fields.

SMELL-O-VISION: Hard to describe what this vast field of #hemp plants smells like. It’s an overpowering aroma that hits you as soon as you arrive 🌱 It’s harvest week—and we’re here for it. @MyNews13 #News13Lake pic.twitter.com/vfdJLIshPb

This week, they began to harvest the first crop, which will be sold back to Treadwell to later turn into tinctures, topicals and teas.

They are some of the products Treadwell uses herself, helping to manage flare-ups due to an auto-immune disorder.

Despite her family's experience in agriculture, Treadwell said that this was a new venture that they started amid a pandemic.

A lot is on the line, and farmers are counting on her.

“How chaotic 2020 has been, this has been a challenging time to start a business. Frankly, it’s been great to have something to look forward to," she said, adding with a laugh, "The plants don’t care who’s running for president or what's happening around you."

But after thinking, later praying, about what it would take to make their own farm flourish, Treadwell said they knew they needed to show other farmers the way.

“Sometimes it might be easier to teach someone to do things correctly than to untrain from old habits, so we looked at experienced and new farmers," she said.

“I’ve been retired about five years, this is a lot of work out here," she said. “We’ve been their family friends for 40 years and when this came up, we said, 'Sure, we’ll try it.' We all learn from each other. Somebody knows this, somebody knows this."

Witt farms alongside her daughter, daughter-in-law and husband, Dennis, who in his youth worked on a farm cultivating tobacco and corn.

But, Witt doesn't have a lick of experience, only a desire to try her hand at growing hemp as the industry just gets off the ground in Florida.

"I was born and raised in Baltimore. I worked in an office for 33 years, so this is a new experience," she said. “We said we can help a lot of people doing this.”

Treadwell said that soon the state will review the samples from the farmer coalition, ensuring they contain the right amount of THC; that amount, which is low at less than 0.3 percent, is not meant to produce intoxicating effects.

She's looking forward to the group producing more in the years to come and one day, the fledgling industry blossoming into something bigger.

“One thing we can do here that almost no place in the country can is grow through the winter," she said. “We can have fresh from Florida hemp almost throughout the year.”

“We’re hoping this is very profitable for us. We have no idea because this is the first time," Witt said.