A Century Ago, Schools Were Shuttered Over a Pandemic. Here's What's Changed.

ORLANDO, Fla. — When you’ve been on this Earth for nearly 97 years, your story reads less like a newspaper and more like a novel.


“I’ve seen just about everything you could think of," says Don Brant of Orlando's Conway neighborhood. "I went through the Great Depression in the '30s, World War II."

Brant also remembers the prologue: the course of events in 1918 that shaped the world forever.

“I heard my Mom and Dad talk about it some," he said. "They said it was a terrible catastrophe."

It was then, as the First World War raged, that the so-called "Spanish flu” plagued the world. Health experts estimate 500 million people were infected with the H1N1 influenza virus worldwide, with 50 million dead.

But U.S. newspapers, including local ones such as Central Florida's Sanford Herald, downplayed news of the virus at the time. Even amid the height of the outbreak in Florida, during the fall of 1918, virus news often garnered just a column, or served as a footnote in local obituaries. 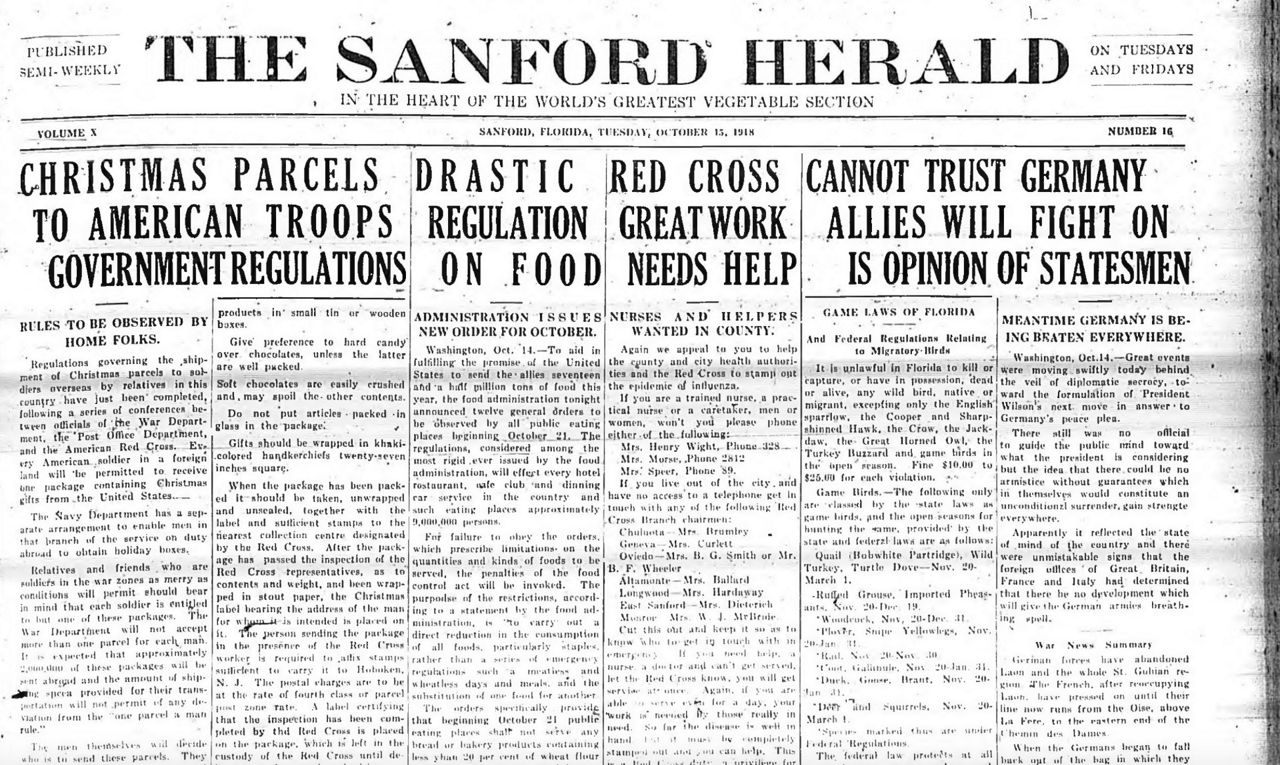 “There is this hyper nationalism going on (at the time). People are in it to finish the war," said historian Ben DiBiase, who serves as the director of educational resources at the Florida Historical Society based in Cocoa. “The front page is dedicated to what’s happening in Europe. It sort of gets lost in the noise, if you will.”

Public morale and patriotism trumped everything else — even as millions fell ill, with makeshift infirmaries springing up to care for the sick.

That included 4,000 Floridians at a time when the state population was fewer than one million, DiBiase said, referencing a 1920 census. 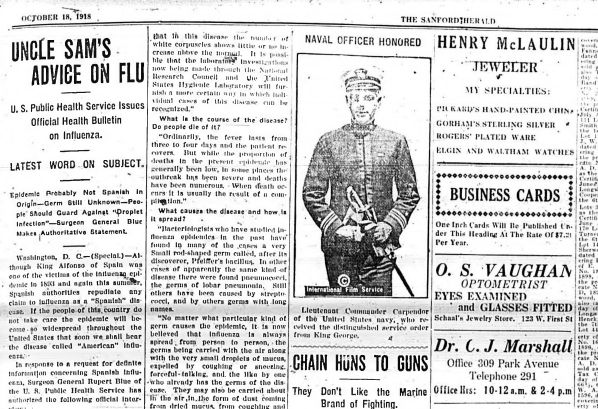 “There’s this negative press, too. You don’t want to tie it to the war effort. So, you don’t necessarily want to advertise so much what’s happening in the newspapers," he said.

As American troops returned from conflict at the tail end of the war, they carried influenza with them. The illness festered in military camps, then spread to more populated areas, such as Jacksonville and Tampa.

“In Tampa, in particular, you have the cigar industry at its zenith during this time period," DiBiase said. "And the process of making cigars involves people tightly packed together in small rooms."

It was a sharp contrast to the still-developing area of Central Florida. In the early 1900s, Orlando was more spread out and deeply rooted in agrarian work, including citrus.

“It was much, much smaller ... back then. It helped Central Florida keep the lid on the outbreak," DiBiase said.

But help, and the need for it, was universal. Ads plastered in papers begged for Red Cross volunteers, as the organization spring-boarded into their "gold age" of aid. Suddenly, wearing masks was commonplace, and recommendations for stopping the spread of the virus mirrored those of today. 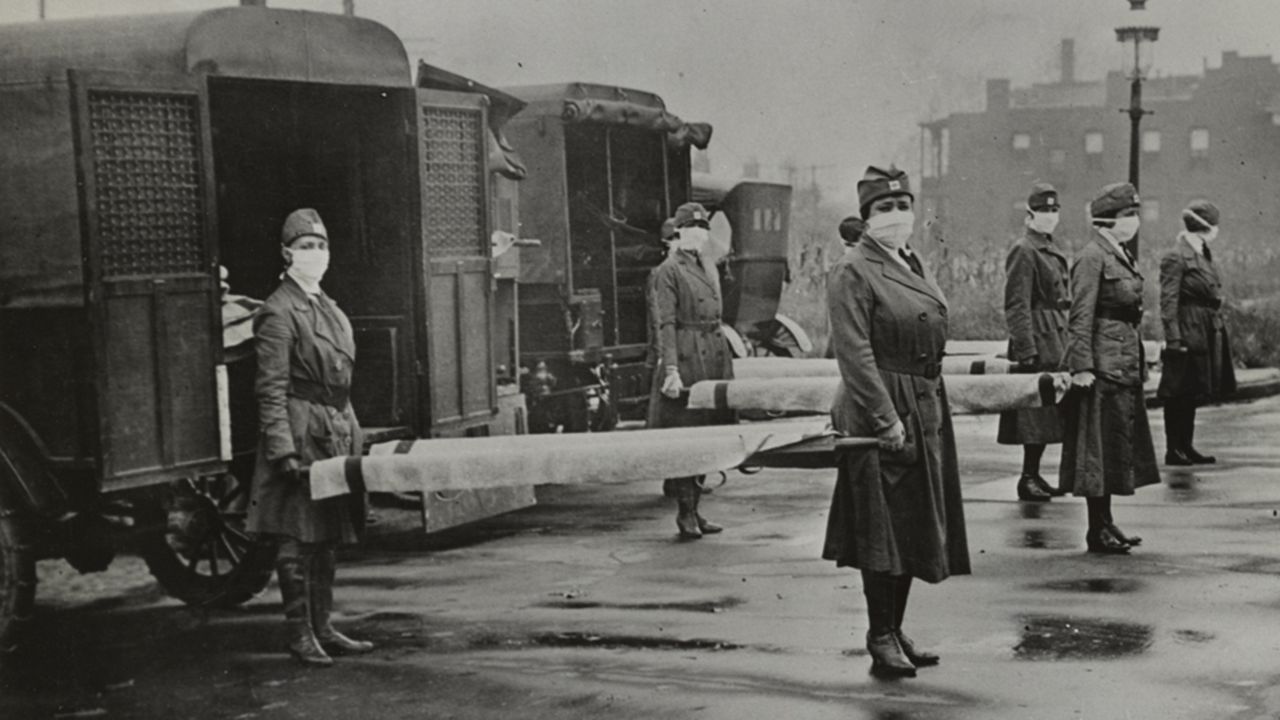 Even though the effects of the pandemic had been lighter in Central Florida, minutes from an Orlando City Council meeting from 1918 show the city taking up an offensive position: Members voted to shut down public places, including schools and places of worship, on October 7, 1918.

At the time, Mayor James LeRoy Giles, the 22nd mayor of Orlando, was serving his first of three terms.

"It wasn’t a debate; it wasn’t a question. Things were just shut down," DiBiase said.

What did the 1918 influenza pandemic mean for students?

In order to understand the impact upon Central Florida youth, historians and recordkeepers have dug deep.

Within an archives vault lined with files, Jill Mahramus dons a pair of white gloves as she carefully types in a code. With a loud whirl, the safe opens, revealing a heavy, hand-sewn book of official Seminole County school board minutes, which she refers to as the "Harry Potter I'm Going to Eat You" book. It's kept under lock and key due to its delicate nature.

She gently flips past the first page, which she points out is likely written in quill, to the minutes from October 1918. There is one line about the influenza's impact upon the district.

“The action of the superintendent in suspending all schools during the period of Spanish influenza was approved," the clerk to Seminole County Public Schools says. 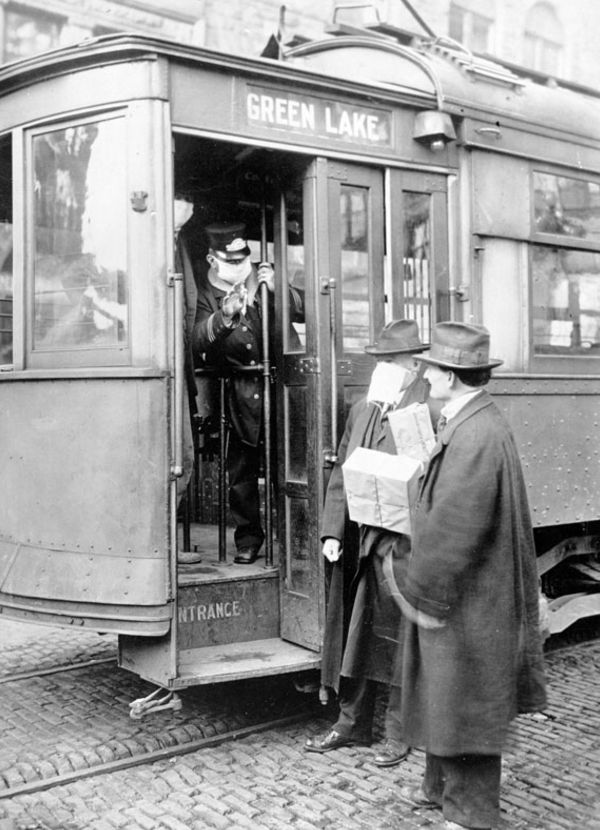 Elsewhere, at the Museum of Seminole County History, coordinator Bennett Lloyd scours old yearbooks for mentions of the virus and unearths two, faded copies from 1919 and 1920. He, too, puts on a pair of gloves to handle the century-old books.

"They take the whole affair quite light-heartedly at first," he comments, as he begins to read a poem in one. “In every school year, some epidemic breaks out. This year, it was first bangs."

According to the History of Public Education in Orange County, schools did shut down in 1918, though it did not say for how long. It also notes that teachers were paid throughout the quarantine. An October 18, 1918 Orlando Sentinel newspaper clipping noted that Hillsborough County followed the example set by Orange, deciding to pay teachers during the influenza when schools were closed.

Generally-speaking, though, school back then was vastly different — for example, it was in session four to six months of the year, according to DiBiase. Also, many students could be exempt from studies due to a variety of reasons, such as agricultural work.

And as Orange County Superintendent Dr. Barbara Jenkins points out, her own district was a fraction of the size it is today.

“Our school system is huge compared to back then. I think the school system — 212,000 students — is larger than the community was as a whole," Jenkins said. “The entire community is depending on how safe we can keep our children. I wish we could turn back the clock and we were having a normal, fun opening of school.

"That’s just not going to be the case."

One month after shutting down the city in October 1918, the Orlando City Council “took the lid off” closures, despite a growing number of death notices in local papers. 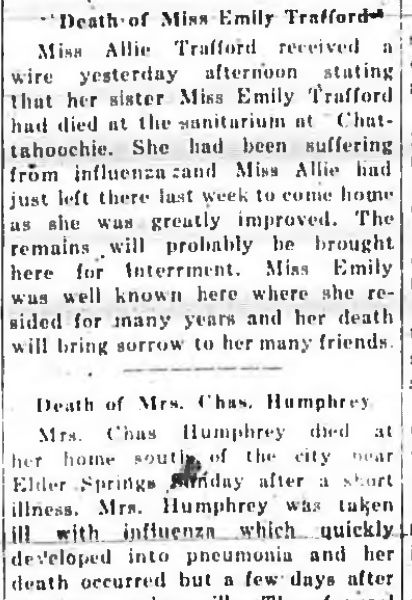 Then, on November 11, 1918, City Council minutes declared, “Nothing else worthwhile" as an armistice was signed, signaling an end to the "war to end all wars."

The world celebrated the end of years of fighting. But the influenza epidemic wasn't over. A third wave struck the world in the winter of 1918 and into 1919.

Sifting through old, weathered photos, Brant spies one of himself as a baby on the hood of his father's Ford Model T. He laughs and says it makes him feel "young again."

And after having live a long, storied life, Brant has advice for those, like students, beginning a new chapter with the backdrop of a looming pandemic.

“You have to persevere, just persevere, try to make the most of the situation," he said.