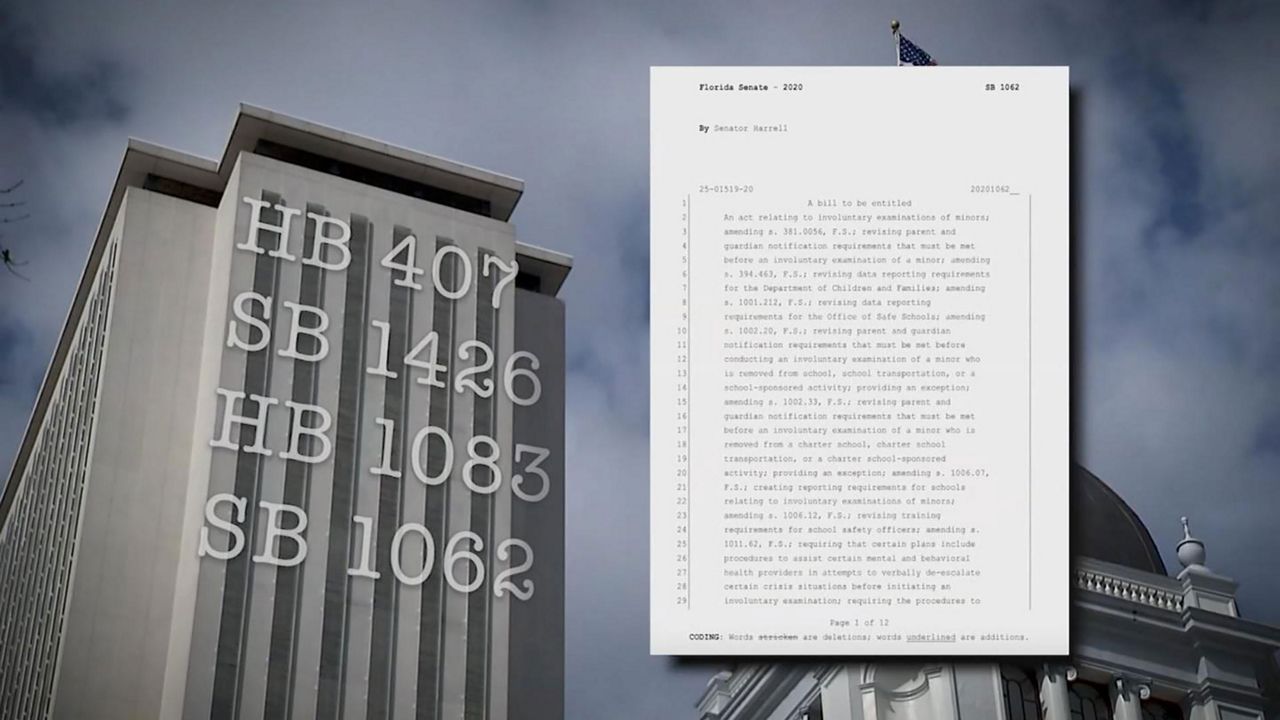 For years now, lawmakers have proposed changes to the Florida Mental Health Act, or "Baker Act," and this year is no different.

The bills now filed in the Florida House and Florida Senate look to increase training and resources, areas that lawmakers in the past have tried to pass, but failed.

Torres is referring to Florida’s Baker Act law, which gives certain authorities the power to involuntarily commit someone considered a harm to themselves or others.

It's a law the Goff family says is broken, after a Winter Garden police officer held their son, Carter, under the Baker Act.

Carter, who has Asperger’s, had stated he wanted to harm himself after being bullied.

Under the Baker Act, “mental illness does not include... developmental disabilities.” Body-camera video obtained by Spectrum News shows there was no conversation about Carter’s disability.

Carter’s father, Ryan Goff, has one request to lawmakers: Don't let this happen to another family.

“There can be changes, common sense changes that wouldn’t hurt the system,” Goff said.

It’s a system Torres is trying to change. During the last session, Torres helped craft Senate Bill 1418, which Gov. Ron DeSantis signed into law in July.

The law’s summary states “... the bill encourages school districts to adopt a standardized suicide assessment tool... that professionals would implement prior to initiation of an involuntary examination.”

The Florida Board of Education and other experts created that tool.

Torres explains using the word “encourages” instead of “requires” could have made a difference with his constituents when it came time to vote.

“I guess people don’t like mandating," Torres said. "They have a sour taste. Mandate (means) order, (as in) you have to do this.”

We looked at the two previous legislative sessions and found three bills proposing changes to the Baker Act. All failed to pass, including HB 685, which would have required officials to notify a student’s parent or guardian before holding the child under the Baker Act.

Beth Carr’s son was also held under the Baker Act and taken to a hospital without her knowledge. The evaluating doctor’s report stated “patient does not meet Baker Act criteria.”

Carr says what happened to her son traumatized their family.

“When I get a call from him, or my husband, or the school for whatever reason during the day, it’s fear. It’s fear,” Carr said.

It's a fear four new bills are again addressing: HB 407, SB 1426, HB 1083, and SB 1062 all require that a parent or guardian be notified before involuntary examination, unless it jeopardizes someone’s safety.

SB 1062 would also require procedures to de-escalate a crisis situation for a child with a developmental disability.

None of the bills, however, focus on the role of the Florida Department of Children and Families, which oversees the Baker Act. DCF oversees a total of 21 areas of service.

Torres thinks the responsibility of Baker Act oversight should go to another agency.

“I’ve always felt that DCF has so much on their plate," Torres said. "And I understand they mean well, but I just think that these types of issues need to be handled in a separate way.”

Following Carter’s situation, the city of Winter Garden required additional training for its officers. But statewide training requires money, and Florida currently ranks as one of the last states when it comes to funding mental health.

Torres encourages frustrated families not to give up and to keep pushing the issue. He hopes lawmakers will eventually listen and come together to improve the system.