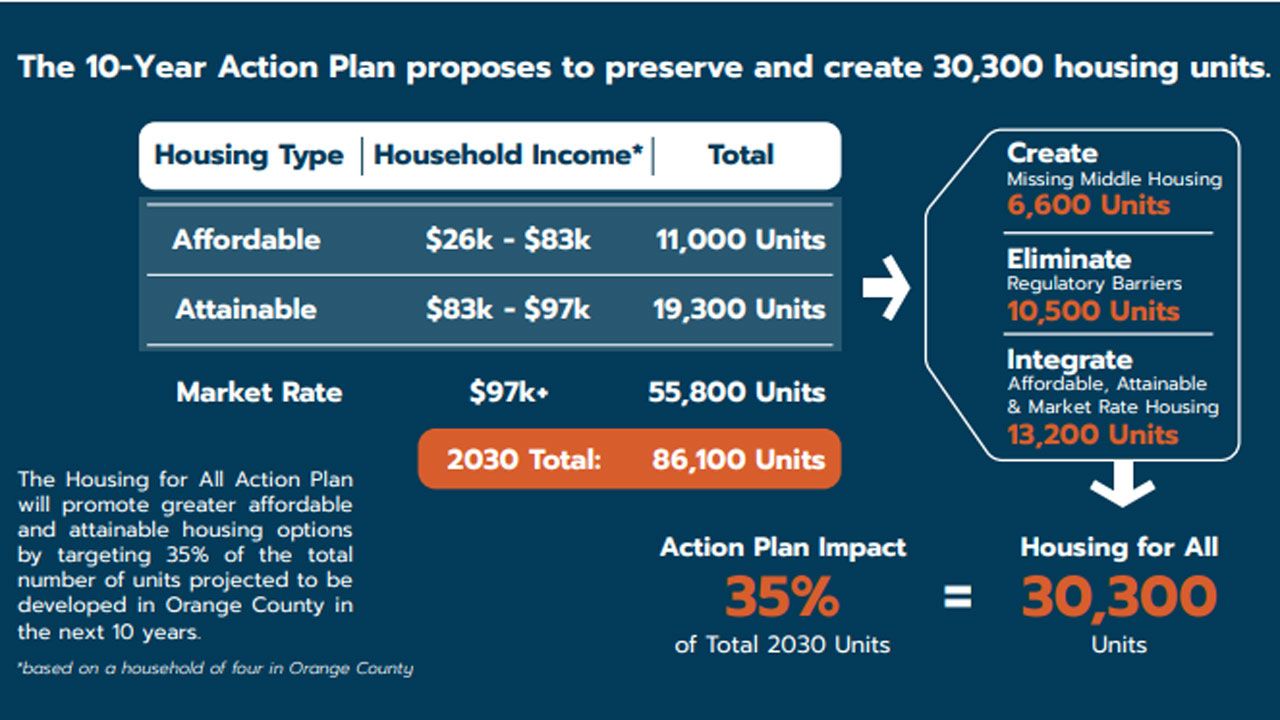 The breakdown of affordable housing units in Orange County's Housing for All plan. (Orange County government)

ORLANDO, Fla. — Orange County leaders are well aware that Central Florida is ranked worst in the nation for affordable housing.

After 8 months, the county’s Housing for All Task Force has come up with a plan.

The report lays out a so-called “10 year action plan” for how county commissioners can put a dent in Central Florida’s affordable housing crisis.

“I am highly encouraged that with these recommendations, we’ll be able to address the issues at hand,” said Orange County Mayor Jerry Demings.

That leaves nothing in the middle, like lower-priced duplexes or townhomes for lower to middle class families to afford.

“There’s so many people today that can afford a moderate to middle income-priced house, but they can’t move out of the aparments because that product isn’t here,” said Mitchell Glasser, Orange County's Manager of Housing and Community Development.

To get these units online, the task force recommends the creation of several funding sources, like a local housing trust fund.

Orange County would commit at least $10 million to it.

There will also be a revolving loan fund of $3.5 million, which nonprofit developers can use, and the money they pay back goes into the next loan.

The plan also says to get rid of certain restrictions like those on ADU’s or ‘granny flats’, and to loosen occupancy limits so more people rent rooms in houses, among other things.

But some Task Force members say this plan doesn’t get ahead of the issue.

“I think the goal that we set for 2030 is aspirational and ambitious and doable, however it just really catches us up,” said Task Force member from District 1 Lynette Fields.

They say Orange County needs to create a lot more units in the next 10 years to keep up with the rapid growth. Statistics show an estimated 1,500 people move into the Central Florida area every week.

But Demings says the plan is a living document, the success of which all hinges on whether the Orange County government actually follows through with the recommendations.

Demings says he’s going to do his part to make sure they do.

“We are committed here in Orange County to change the direction of accessible housing, because everyone deserves a safe and affordable place to live,” Demings said.

He adds that Orange County can’t do it on their own.