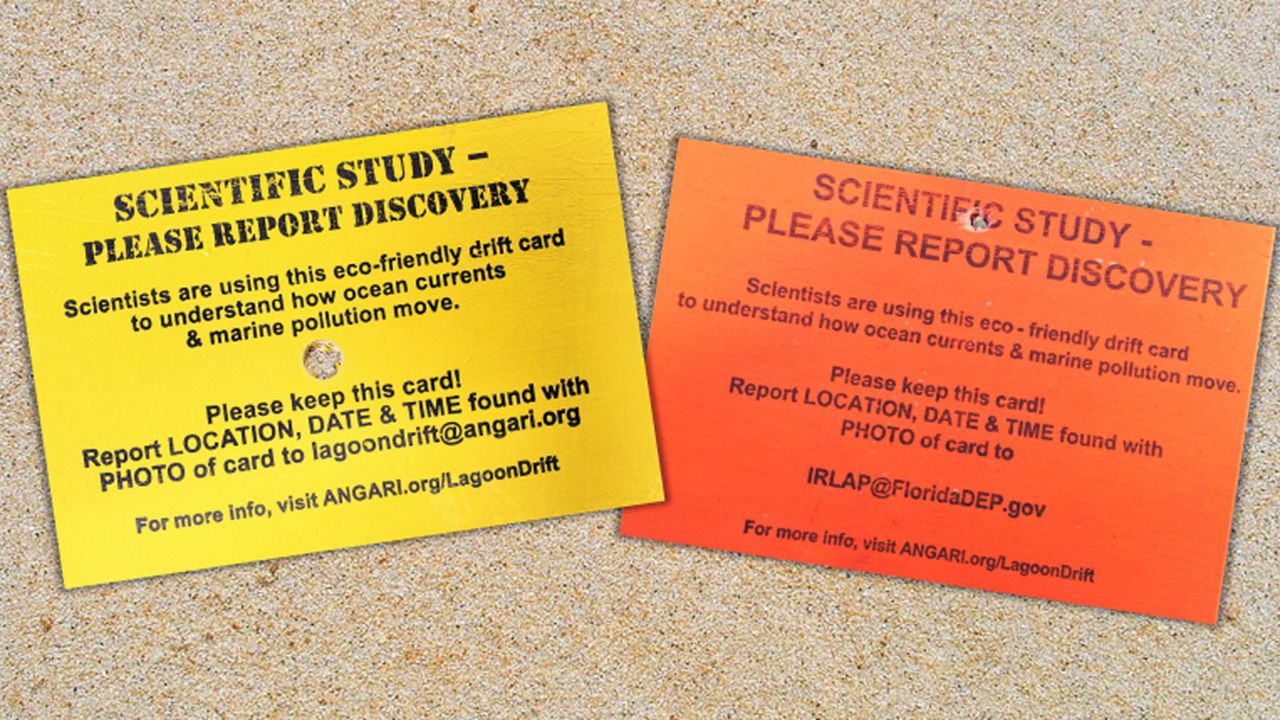 The yellow and orange plywood cards, designed to float, include contact information. (Courtesy of Angari Foundation)

BREVARD COUNTY, Fla. — Researchers are going low-tech in an ongoing quest to figure out what's ailing the Indian River Lagoon.

Their aim is lot of public participation. By being a citizen scientist, researchers are hoping people get their “drift.”

Three to four days a week for the past 40 years, Tom Stokes tries to reel fish in on the waters of the Indian River Lagoon.

But Stokes agrees: The state of the lagoon is no laughing matter.

GET MY DRIFT? it's your chance to be a citizen scientist, by helping @ANGARIocean and @FLDEPNews find these "Drift Cards" in the Indian River Lagoon. People can fill out info to help them study currents and marine debris. Details at 530 pm @MyNews13 #News13Brevard #Florida pic.twitter.com/KhQbxyUtkI

The waterway's plight, and the efforts to restore decades of pollution, is a big fish needing to be caught.

The Angari Foundation, headquartered in West Palm Beach, is partnering with the Florida Department of Environmental Protection on a pilot citizen science program involving the lagoon.

It involves “drift cards,” 4-inch-by-6-inch pieces of eco-friendly untreated plywood. They're designed to float on the water's surface and be carried where currents take them.

"It's a nice, inexpensive way to study the currents, how the water flows in the ecosystem," said Kelli Hunsucker, an assistant professor of oceanography at Florida Tech.

On November 2, 160 drift cards were released at sites from Palm Beach County north to Brevard County. Forty of them were released in the south Melbourne Beach area. The goal is to see just where marine debris caused by us goes.

In steps, citizens such as Stokes, who frequent the river, have a chance at finding a card.

"(I’ll) certainly will be on the lookout for them," he said.

The drift cards are biodegradable and will break down weeks after their release.

The foundation tells Spectrum News 13 it's looking at a larger number of drift cards to put in the lagoon next spring.