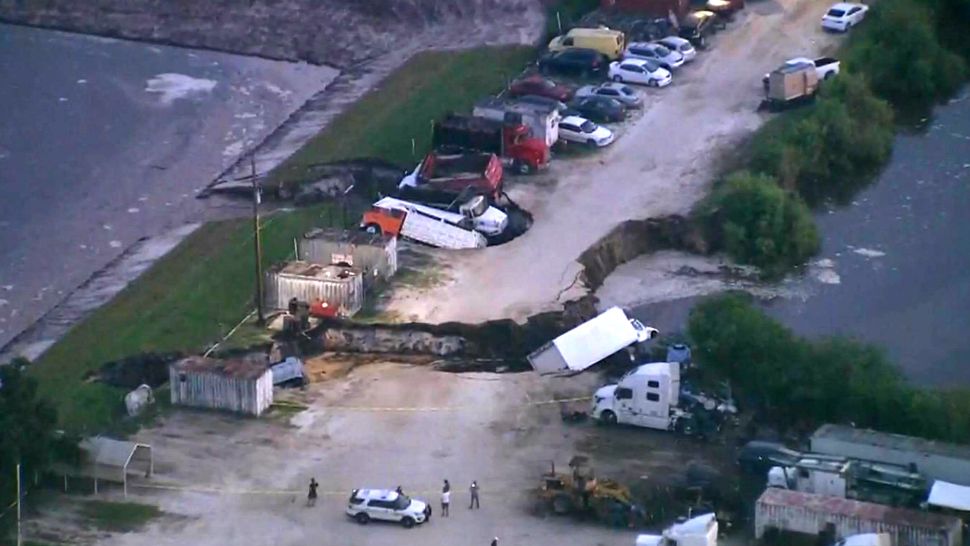 Several work trucks fell into a watery hole overnight as a "large fracture" opened up below them in Orange County, Florida, near Orlando International Airport. (Sky 13)

Orange County Sheriff's deputies were called out to the Accu Crete facility at 11762 Boggy Creek Road, near Orlando International Airport, just before 1 a.m., where they found "numerous large construction vehicles" that had fallen into a hole, they said.

No injuries have been reported.

On the scene. Working to get details on how this happened. @MyNews13 pic.twitter.com/qZfyN9A1ae

According to Orange County Fire Rescue, three dump trucks, one pickup truck, and two box trucks fell into a stormwater pond after a parts of a nearby roadway collapsed. Several canisters also fell in.

As of late Wednesday morning, officials hadn't determined whether the hole is an actual sinkhole or a depression caused by something else.

SINKHOLE...OR SOMETHING ELSE? Just beyond this police tape, several large construction vehicles fell into a huge fracture in ground near OIA.@OrangeCoSheriff says State Environmental Protection Division will investigate cause later this AM. @MyNews13 @BN9 pic.twitter.com/9zv2BBBSAZ

Officials with the state Department of Environmental Protection said the pond that the vehicles entered is a manmade pond. They said that there's no threat to natural surface waters.

After the officials determine that the site has finished settling, they'll approve cleanup and recovery of the vehicles and canisters.

Civil engineer Julian Coto, who works for the truck yard, said he doesn't think it's a sinkhole.

“This area isn’t prone to sinkholes, so we are going to do some geological testing and determine what exactly is going on and how to put it back together again and fix it," Coto said.

Several of the vehicles on the property are owned by private drivers, who came by this morning to check on their vehicles.

The @FLDEPNews is now on hand in South Orange County to determine cause of the hole created that now has 7 trucks in it. @MyNews13 pic.twitter.com/OqSOS1JOw4

"One truck, I don’t see nothing," said Norberto Rodriquez, who said he lost at least a couple of vehicles. "The other truck, full covered by the water. Other truck too. It's my life, it's my work."

Truck drivers say they're building a new apartment complex at the site.

Homebuilder Taylor Morrison said representatives were also at the site today along with engineering consultants, to assess the situation and said they hoped to have more information in the next week.

"We’re confident the development work on our property is in compliance with all of our applicable development permits," the company said in a released statement.

DEP officials arrived at the scene Wednesday afternoon and will determine the cause of the fracture and whether it was actually a sinkhole.

We’ve watched this scene replay dozens of times this AM: Drivers arriving to check on their trucks, some leaving w/ them—& others without. @MyNews13 @BN9 pic.twitter.com/80BR6jNSpF

Several large trucks are seen in a watery ditch early Wednesday after a "large fracture" opened up underneath them. (Orange County Fire Rescue)