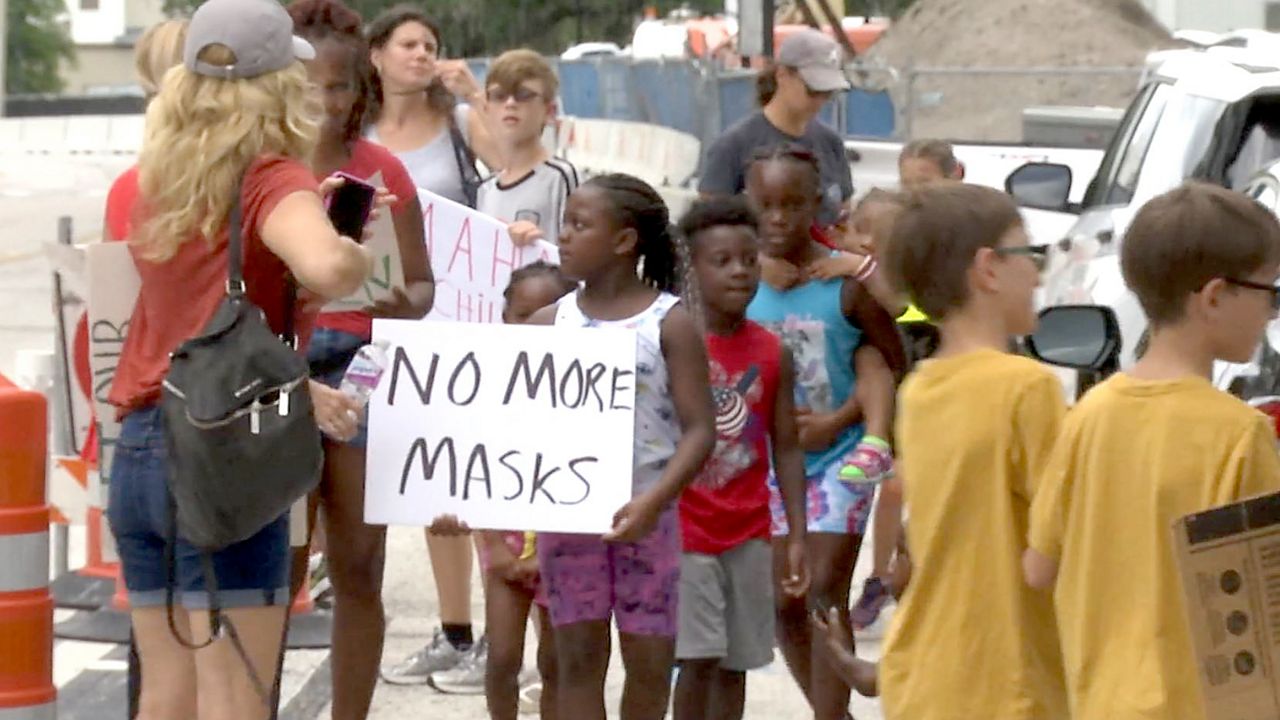 ORANGE COUNTY, Fla. — While many students are out enjoying summer break, the Orange County Public Schools board is thinking about next year as officials came together to discuss the fall face-covering policy in a meeting Thursday.

At Thursday’s afternoon meeting, the board heard from parents and others as school officials consider the district’s face-covering policy for the fall.

Soon after the start, a recess had to be called because some at the meeting refused to put on a mask.

. @OCPSnews school board takes a 5 minute recess b/c some ppl refuse to put on a mask during meeting. Ppl start chanting and calling them out as they exit the room. Officials are urging ppl to put them on so they can continue the mtg. @MyNews13 pic.twitter.com/ybWyxBDcFB

After everyone was convinced to wear masks, the meeting resumed.

Many people at the meeting expressed support for the part of proposed policy change that would make masks optional. However, many people also opposed the part of the policy that would permit the superintendent to reinstate mask wearing if the Centers for Disease Control and Prevention changed its guidance or saw a spike in COVID-19 cases.

After that, public discussion began and among those speaking in favor of students continuing to wear masks were the head of the teachers' union and a student whose brother has Down syndrome.

Young @OCPSnews student now talking about his 4th grade brother w/Down syndrome, says he has to be in school, so wishes younger grades will still wear masks so he can be safe, while older grades who can get #vaccine can be voluntary. @MyNews13 pic.twitter.com/uNzrCzWv1M

Debate got heated at times, and the meeting had to be suspended a second time. After tempers cooled, the meeting resumed again.

This man who says he’s a doctor says masks don’t protect ppl and that masks are harmful for kids. Not sure what kind of a doctor he is. @MyNews13 pic.twitter.com/BPzXvKyINj

This mom, sobbing while speaking, says her 1st grade son, who has learning disabilities, cried frequently b/c he got in trouble for his mask falling off his nose. Wants it to be voluntary. @MyNews13 pic.twitter.com/M6GFJAFhbx

She has five kids and says for the younger ones, it did more harm than good when it came to their mental health.

“My third grader struggled the most," Farrant said. "There were days I would drop him off and he’d be bawling in the back seat saying, ‘Mom, please, I can’t wear this mask in school, it makes me so anxious, and then I get shaky and I can’t do my tests.'”

She was joined by dozens of other parents and community members at Thursday’s meeting, all demanding the board make masks optional.

“I promise you, if you continue this, you’ll be on the wrong end of a lawsuit,” said one man who spoke during public comment.

Other parents, though, spoke out at the meeting in favor of mandatory masks for children younger than 12, because they’re still not eligible for a vaccine.

“That’s all that we ask for," said Orange County parent Judi Hayes. "It’s reasonable and it’s safe and our children deserve that.”

Most of the board favored the current proposal which makes masks voluntary for everyone.

That proposal also includes a second rule that if the CDC or other governmental entities issue stricter guidance on masks again, the superintendent has the authority to make them mandatory again.

Farrant says they believe that section still takes away their choice in their child’s health decisions. ​

“So that’s a little sketchy for us … this should always be optional,” she said.

But because the school board didn't make any substantive changes, that whole proposal will now move forward for a final vote by the board on July 13.