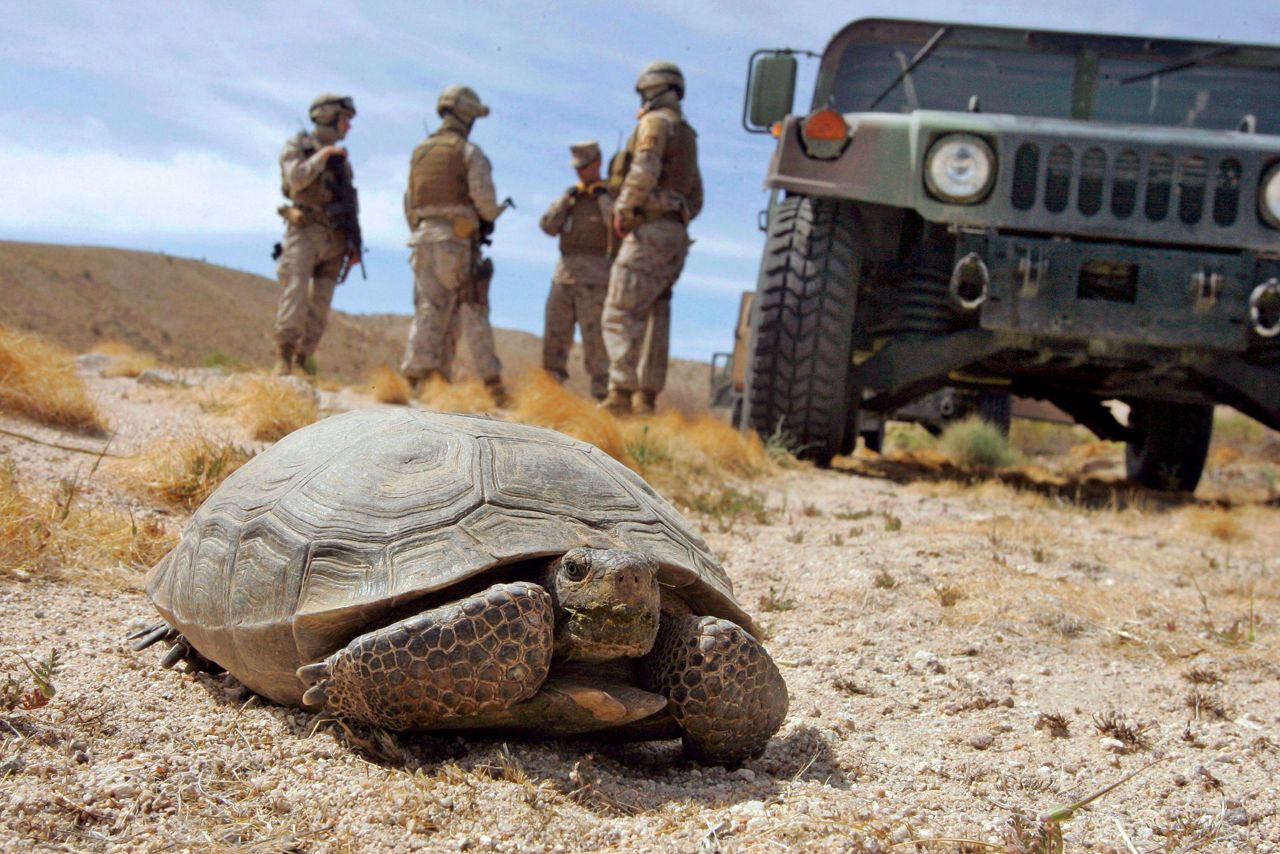 1 of 2
FILE - In this April 4, 2008 file photo, Marines wait for a desert tortoise, endangered and protected by federal law from harm or harassment, to move off the road at the U.S. Marine Corps' Air Ground Combat Center at Twentynine Palms, Calif. The Trump administration has given final approval to the largest solar energy project in the U.S. and one of the biggest in the world despite objections from conservationists who say it will destroy habitat critical to the survival of the threatened Mojave desert tortoise in southern Nevada. (AP Photo/Reed Saxon, File) 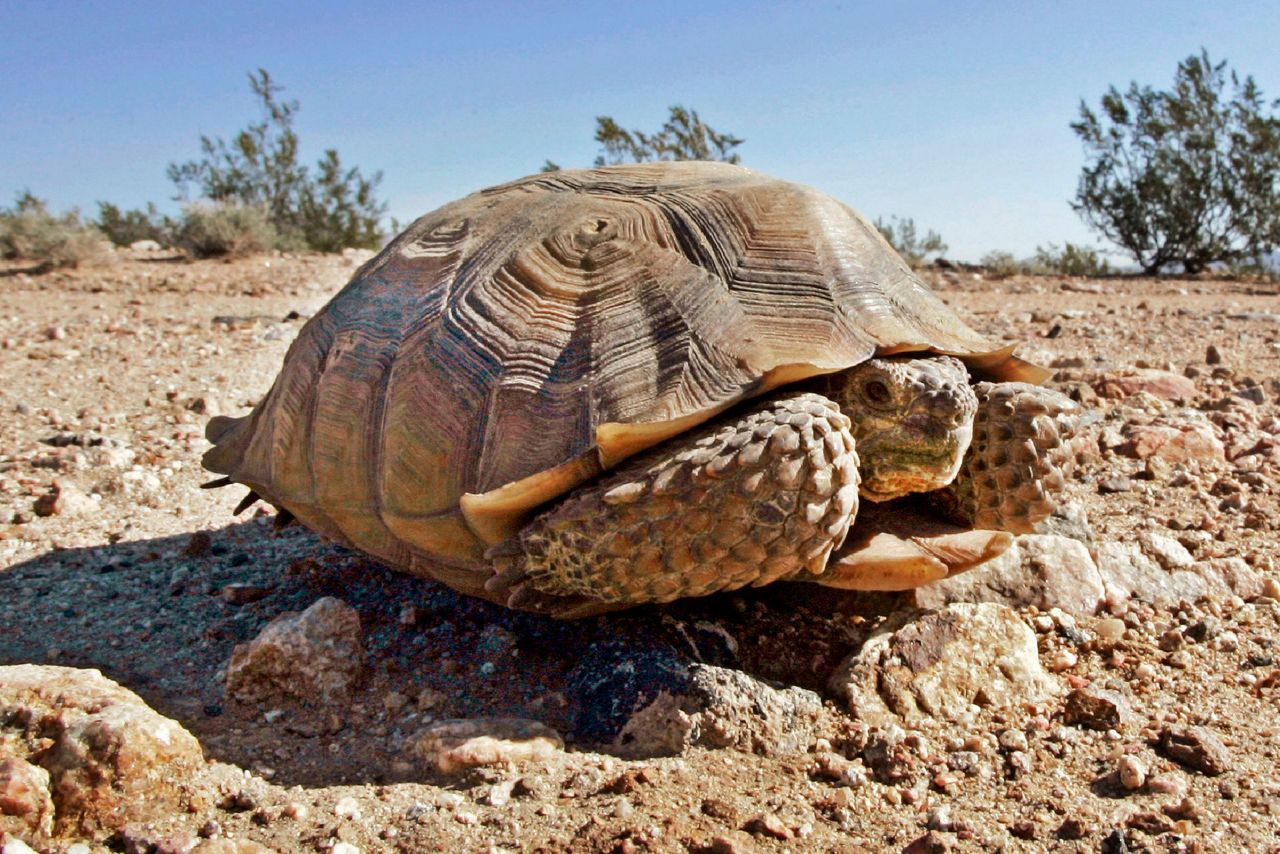 2 of 2
FILE - This Sept. 3, 2008 file photo shows an endangered desert tortoise in the middle of a road at the proposed location of three BrightSource Energy solar-energy generation complexes in the eastern Mojave Desert near Ivanpah, Calif., just south of the Nevada state line. The Trump administration has given final approval to the largest solar energy project in the U.S. and one of the biggest in the world despite objections from conservationists who say it will destroy habitat critical to the survival of the threatened Mojave desert tortoise in southern Nevada. (AP Photo/Reed Saxon, File)

Biggest US solar project approved in Nevada despite critics

RENO, Nev. (AP) — The Trump administration announced final approval Monday of the largest solar energy project in the U.S. and one of the biggest in the world despite objections from conservationists who say it will destroy thousands of acres of habitat critical to the survival of the threatened Mojave desert tortoise in Nevada.

The $1 billion Gemini solar and battery storage project about 30 miles (48 kilometers) northeast of Las Vegas is expected to produce 690 megawatts of electricity — enough to power 260,000 households — and annually offset greenhouse emissions of about 83,000 cars.

It will create about 2,000 direct and indirect jobs and inject an estimated $712.5 million in the economy as the nation tries to recover from the downturn brought on by the coronavirus outbreak, Interior Secretary David Bernhardt said.

“As our economy rebounds from the invisible enemy, President Trump is working to make the United States stronger than ever before,” Bernhardt said Monday. “Our economic resurgence will rely on getting America back to work and this project delivers on that objective.”

The first phase of the project covering about 11 square miles (28 sq. km) of federal land is expected to be completed next year with 440 MW of solar capacity for use in Nevada. Another 250 MW of generating capacity would be added in the second phase with the power sold in Nevada or exported to Arizona and California in 2022.

Coupled with a 380 megawatt AC battery storage system, it will be one of the first in Nevada to include batteries to enable power delivery after the sun goes down.

“The solar industry is resilient and a project like this one will bring jobs and private investment to the state when we need it most,” said Abigail Ross Hopper, president and CEO of the Solar Energy Industries Association.

Environmental groups including the Western Watersheds Project and Basin and Range Watch have been trying unsuccessfully for years to persuade the Bureau of Land Management to build the project elsewhere.

“We believe solar energy can be an incredibly good thing but if you put it in the wrong location it can be the worst thing in the world for the environment,” said Kevin Emmerich, director of Basin and Range Watch.

“We don’t think it will cause the extinction of the desert tortoise, but it is going to be a fairly big nail in the coffin of the species,” he said in an interview Monday.

In addition to the tortoise, the site is home to two types of rare milkvetch plants, kit foxes, burrowing owls and wildflowers, said Laura Cunningham, a biologist with the Western Watersheds Project.

“The area is rich in biological soil crusts, which sequester large amounts of carbon, but which will now be scraped, bulldozed, mowed and driven on to construct this industrial power plant,” she said.

Bernhardt acknowledged in the record of decision he signed Friday the project would adversely impact tortoise habitat, but “on balance, the benefits associated with large scale renewable energy production and battery storage capacity outweigh the impacts to the desert tortoise.”

The project will create as many as 900 construction jobs at its peak, with 19 permanent workers at the site, and support an additional 1,100 jobs in the local community, he said.