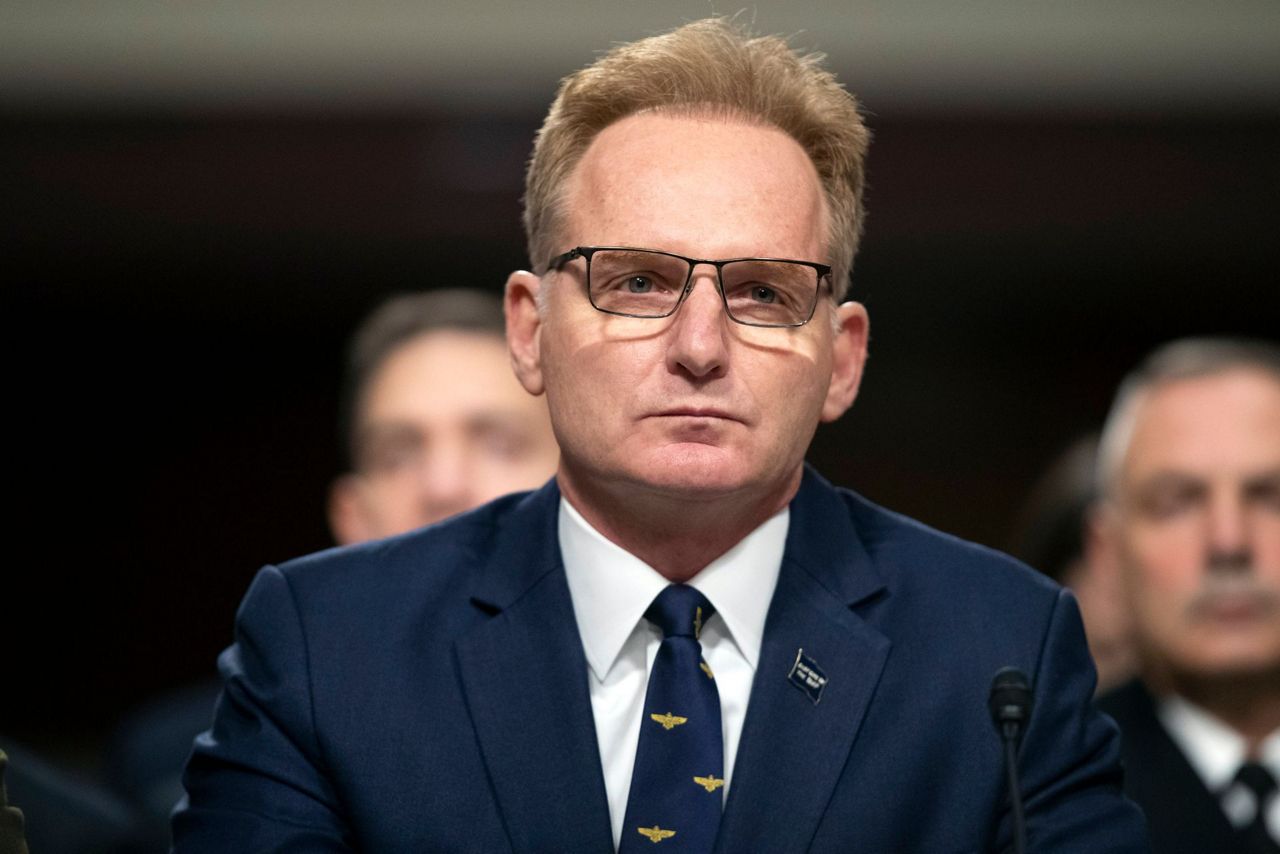 1 of 3
FILE - In this Dec. 3, 2019, file photo, acting Navy Secretary Thomas Modly testifies during a hearing of the Senate Armed Services Committee about about ongoing reports of substandard housing conditions in Washington, on Capitol Hill. Modly says the captain of the COVID-stricken aircraft carrier who was fired last week had betrayed his service and may have been “too naive or too stupid” to be commanding officer of the ship. Officials are confirming that Modly made the comments Sunday, April 5, 2020, to the ship's crew in Guam. (AP Photo/Alex Brandon, File) 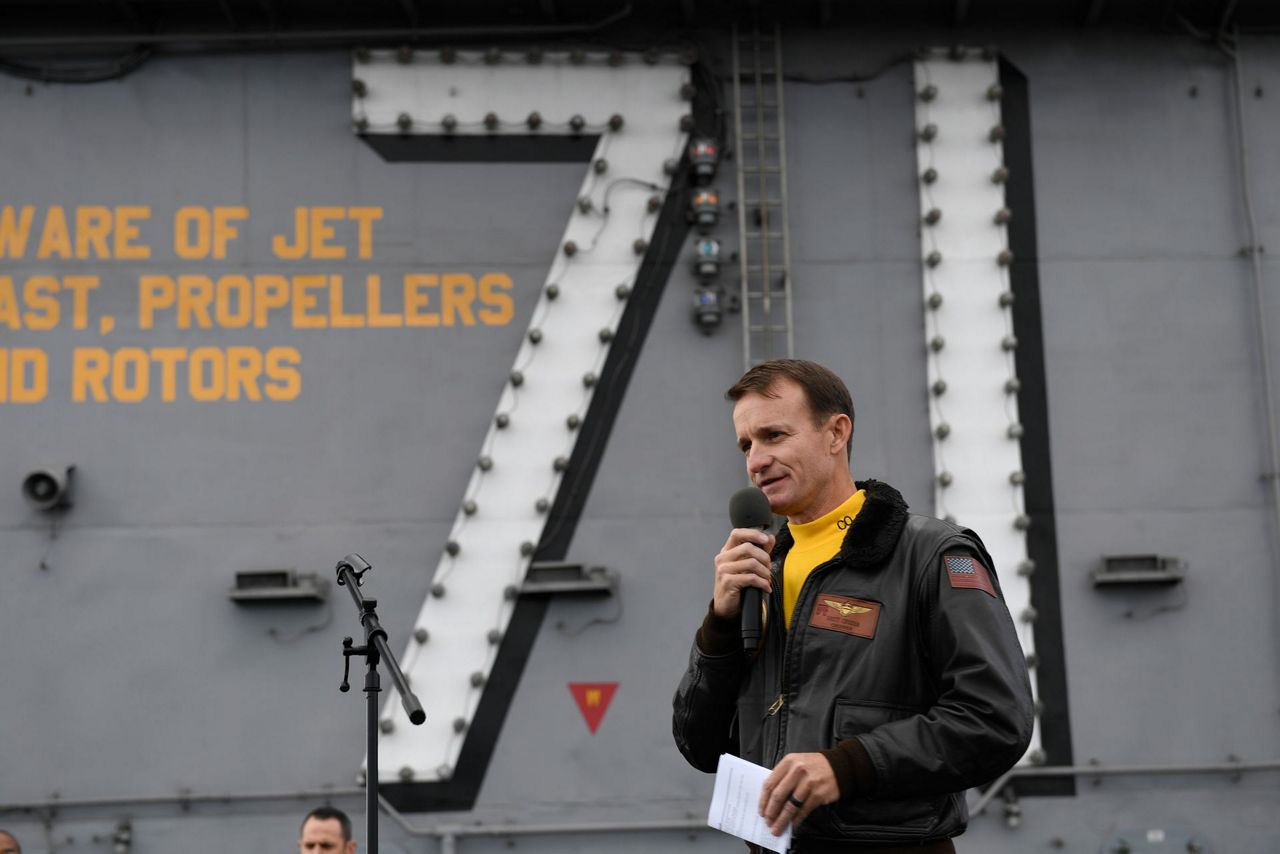 2 of 3
In this Nov. 15, 2029, photo U.S. Navy Capt. Brett Crozier, commanding officer of the aircraft carrier USS Theodore Roosevelt (CVN 71), addresses the crew during an all-hands call on the ship's flight deck while conducting routine operations in the Eastern Pacific Ocean. U.S. defense leaders are backing the Navy's decision to fire the ship captain who sought help for his coronavirus-stricken aircraft carrier, even as videos showed his sailors cheering him as he walked off the vessel. Videos went viral on social media Friday, April 3, 2020, showing hundreds of sailors gathered on the ship chanting and applauding Navy Capt. Brett Crozier as he walked down the ramp, turned, saluted, waved and got into a waiting car. (U.S. Navy Photo by Mass Communication Specialist 3rd Class Nicholas Huynh via AP) 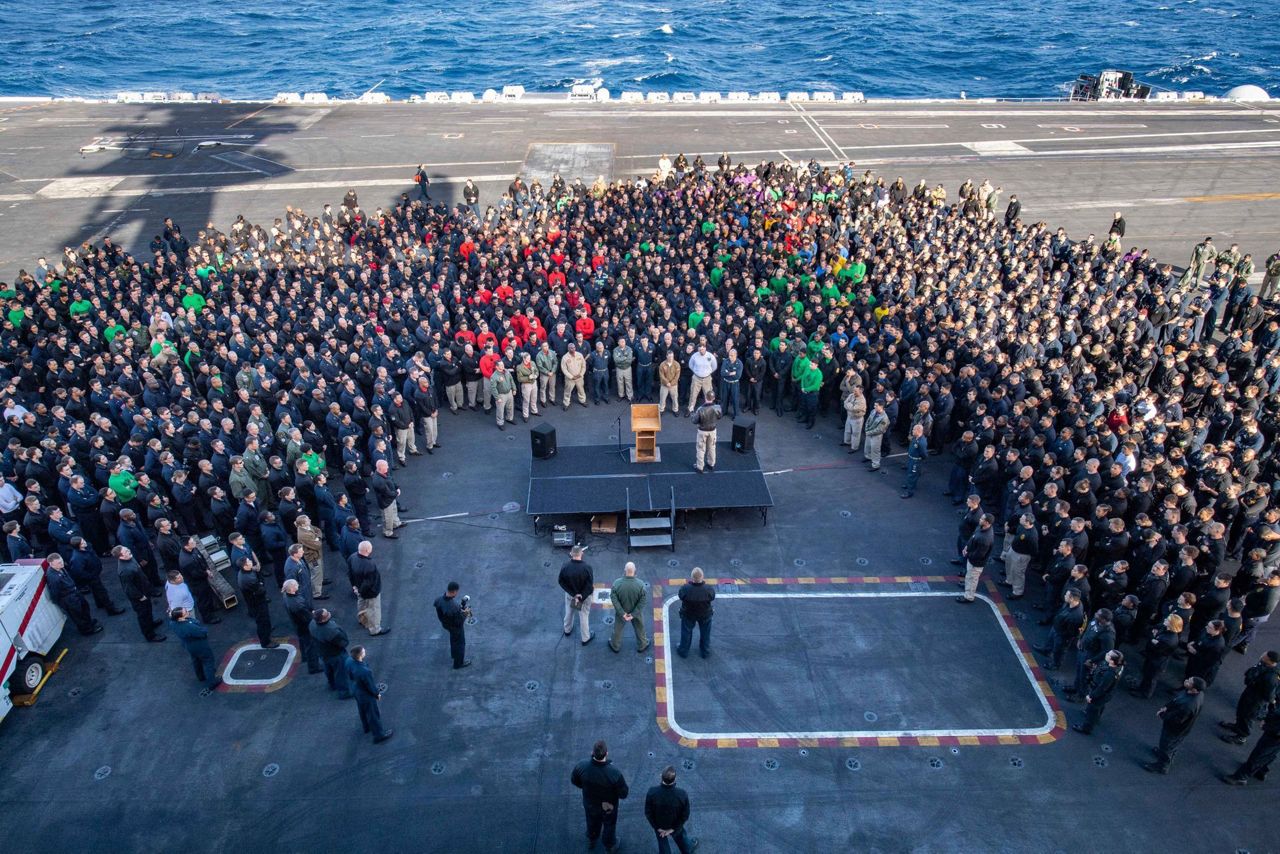 3 of 3
FILE - In this Dec. 15, 2019, file photo, U.S.Navy Capt. Brett Crozier, commanding officer of the aircraft carrier USS Theodore Roosevelt (CVN 71), addresses the crew during an all hands call on the ship's flight deck while conducting routine training in the Eastern Pacific Ocean. The commander of the U.S. 7th Fleet visited the leadership of the USS Theodore Roosevelt in Guam, where the aircraft carrier is being cleaned after an outbreak of COVID-19 among its crew. The ship’s commander, Capt. Crozier, was fired for going outside of the chain of command in asking for help for the outbreak, in a decision now under review. (U.S. Navy Photo by Mass Communication Specialist Seaman Kaylianna Genier via AP)

WASHINGTON (AP) — The Navy's acting secretary has submitted his resignation in the wake of a controversy in which a profanity-laden audio recording reportedly depicted him calling the fired commander of the coronavirus-stricken USS Theodore Roosevelt "too naive or too stupid.”

Defense Secretary Mark Esper said he briefed President Donald Trump on his conversation with Modly, and with the president’s approval he is appointing James McPherson as acting Navy secretary.

Modly had relieved Crozier of command of the aircraft carrier last week. He said he'd lost confidence in Crozier for having shown “extremely poor judgment” in widely distributing a memo pleading for an accelerated evacuation of the crew members to protect their health.

“Sadly, Acting Secretary Modly’s actions and words demonstrate his failure to prioritize the force protection of our troops," Pelosi, D-Calif., said in a written statement. “He showed a serious lack of the sound judgment and strong leadership needed during this time. Acting Secretary Modly must be removed from his position or resign.”

At least 173 sailors aboard the ship had tested positive for the coronavirus as of Monday. About 2,000 of the 4,865 crew members had been taken off the ship to be tested.

On Sunday, Modly flew to Guam to address sailors on the aircraft carrier who had cheered their support of Crozier as he departed the ship on Friday. He reprimanded them, saying they were overlooking their most basic duty to defend U.S. interests.

“So think about that when you cheer the man off the ship who exposed you to that,” he said. “I understand you love the guy. It’s good that you love him. But you’re not required to love him.”

“I apologize for any confusion this choice of words may have caused,” he wrote, referring to his speech aboard the Roosevelt on Sunday. “I also want to apologize directly to Captain Crozier, his family, and the entire crew of the Theodore Roosevelt for any pain my remarks may have caused.”

Defense Secretary Mark Esper’s staff told Modly he must apologize, according to a person familiar with the conversation who spoke on the condition of anonymity to discuss a private conversation.

Trump told reporters at the White House on Monday that he might get involved, agreeing that Modly's criticism of Crozier was “a rough statement.” He said Crozier made a mistake when he sent a memo to several people laying out his concerns about the crew and the virus. In the memo, which was leaked to the media, Crozier said, “We are not at war. Sailors do not need to die.”

Trump said Crozier had a good career prior to this incident, adding, “I don't want to destroy somebody for having a bad day.”

Modly, in his apology, reframed his earlier remarks that Crozier was "too naive or too stupid” to command. Instead, he said he believes Crozier is “smart and passionate.”

“I believe, precisely because he is not naive and stupid, that he sent his alarming email with the intention of getting it into the public domain in an effort to draw public attention to the situation on his ship,” Modly wrote.

On Sunday aboard the ship, Modly had urged the crew to stop complaining.

“It is the mission of the ship that matters,” he said. “You all know this, but in my view your Captain lost sight of this and he compromised critical information about your status intentionally to draw greater attention to your situation.”

Modly, a 1983 Naval Academy graduate, became the acting Navy secretary last November after Richard Spencer was ousted from the position. Trump last month nominated retired Rear Adm. Kenneth Braithwaite, the current ambassador to Norway, to be the next Navy secretary.

In his remarks aboard the Roosevelt, Modly raised issues likely to please Trump. He accused the news media, for example, of manipulating a political agenda to divide the country and embarrass the Navy. He said China “was not forthcoming” about the coronavirus when it began spreading there months ago, echoing Trump's oft-repeated statement that China could have done more to prevent a pandemic.

And Modly invoked the name of Trump's chief Democratic challenger, Joe Biden, noting that the former vice president had said Modly's decision to fire Crozier was almost criminal. “I assure you it was not,” Modly said.

Modly said Crozier should have known his letter voicing urgent concerns about the virus aboard his ship would leak to the media. He said if Crozier didn't think this would be the result, he was “too naive or too stupid to be a commanding officer of a ship like this."

He also accused Crozier of betraying his duty as an officer. “And I can tell you one other thing, because he did that he put it in the public's forum and it's now become a big controversy in Washington D.C., and across the country,” Modly said.

After an unofficial transcript of Modly’s remarks and an audio recording circulated widely on the internet Monday, Rep. Elaine Luria, a Virginia Democrat and Navy veteran, called for Modly to be fired.

Luria said Modly's comments show he is “in no way fit” to lead the Navy. Luria's district includes Naval Station Norfolk, the world's largest naval base.