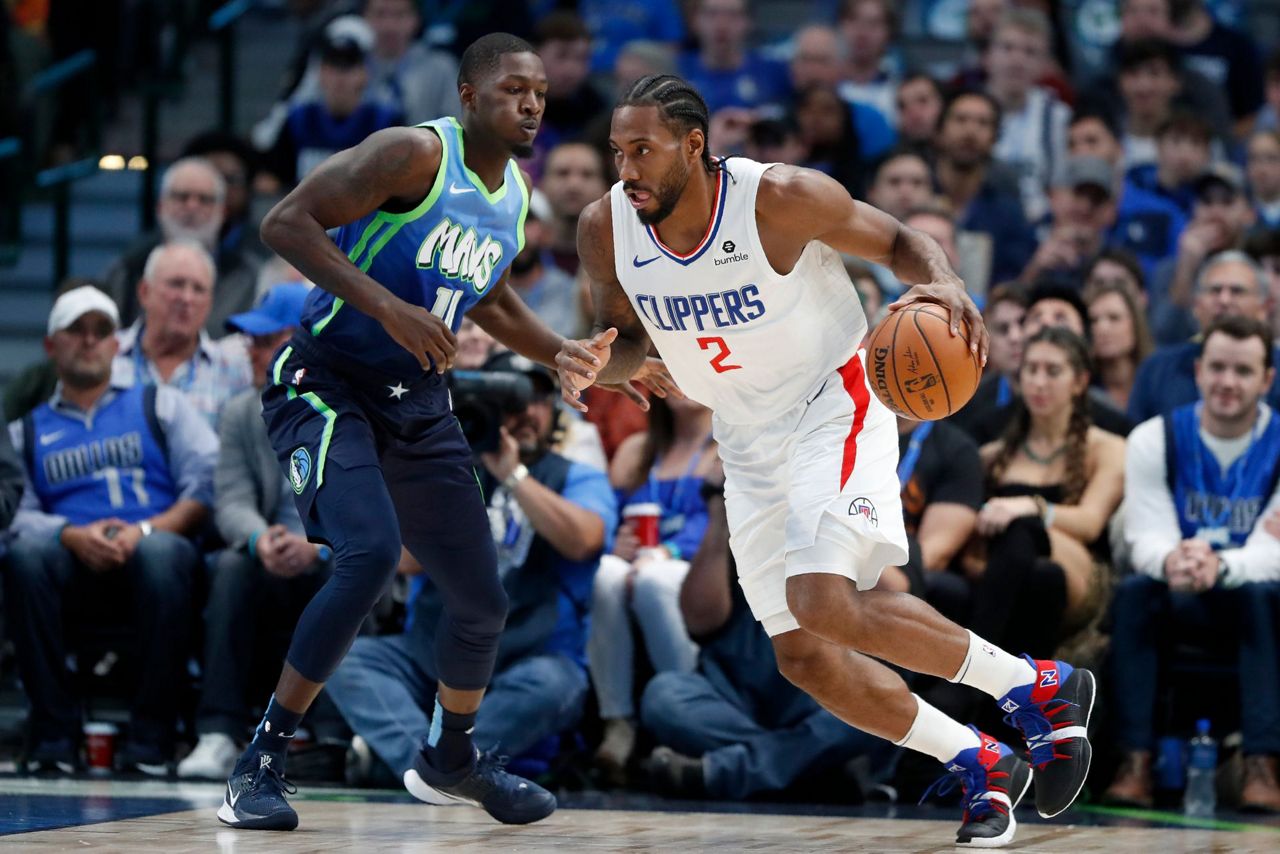 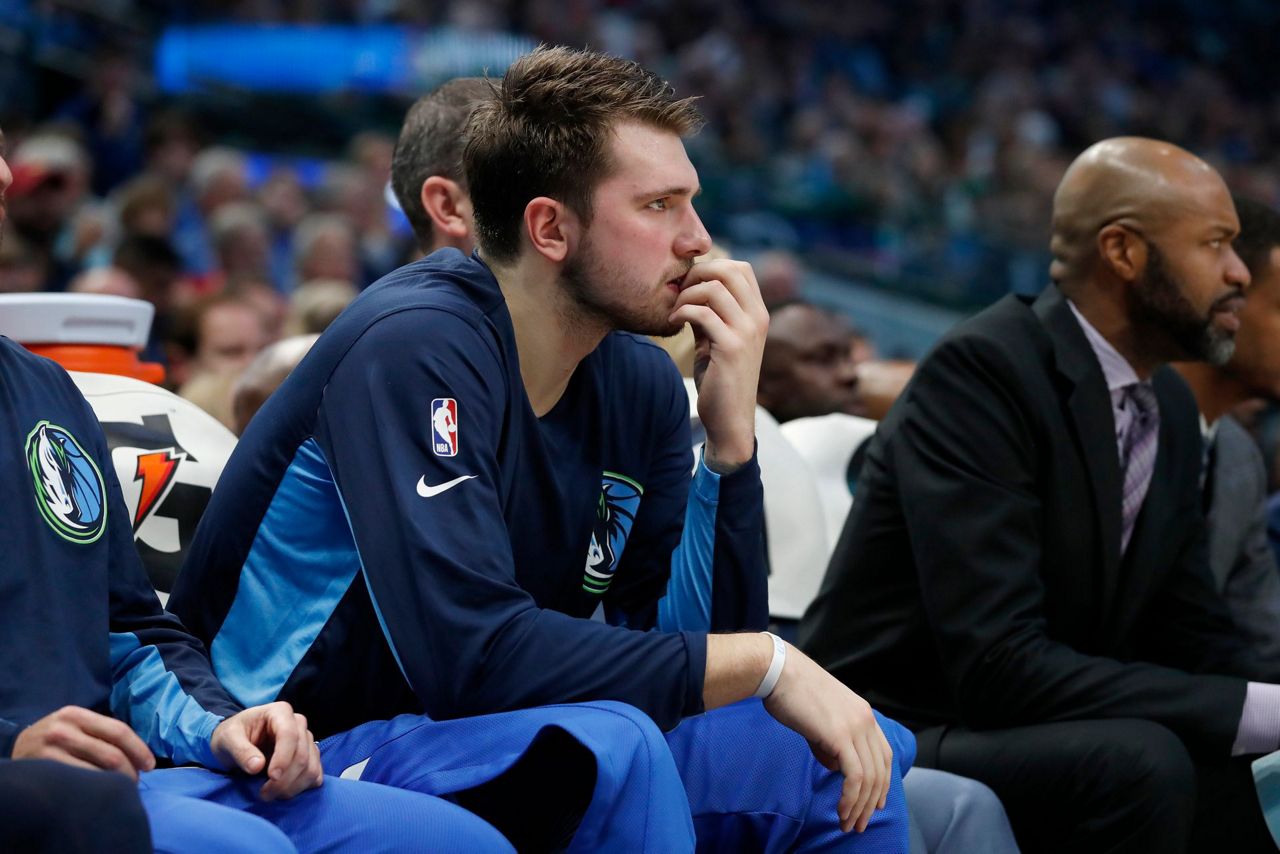 2 of 8
Dallas Mavericks forward Luka Doncic (77) watches play in the first half of an NBA basketball game against the Los Angeles Clippers in Dallas, Tuesday, Nov. 26, 2019. (AP Photo/Tony Gutierrez) 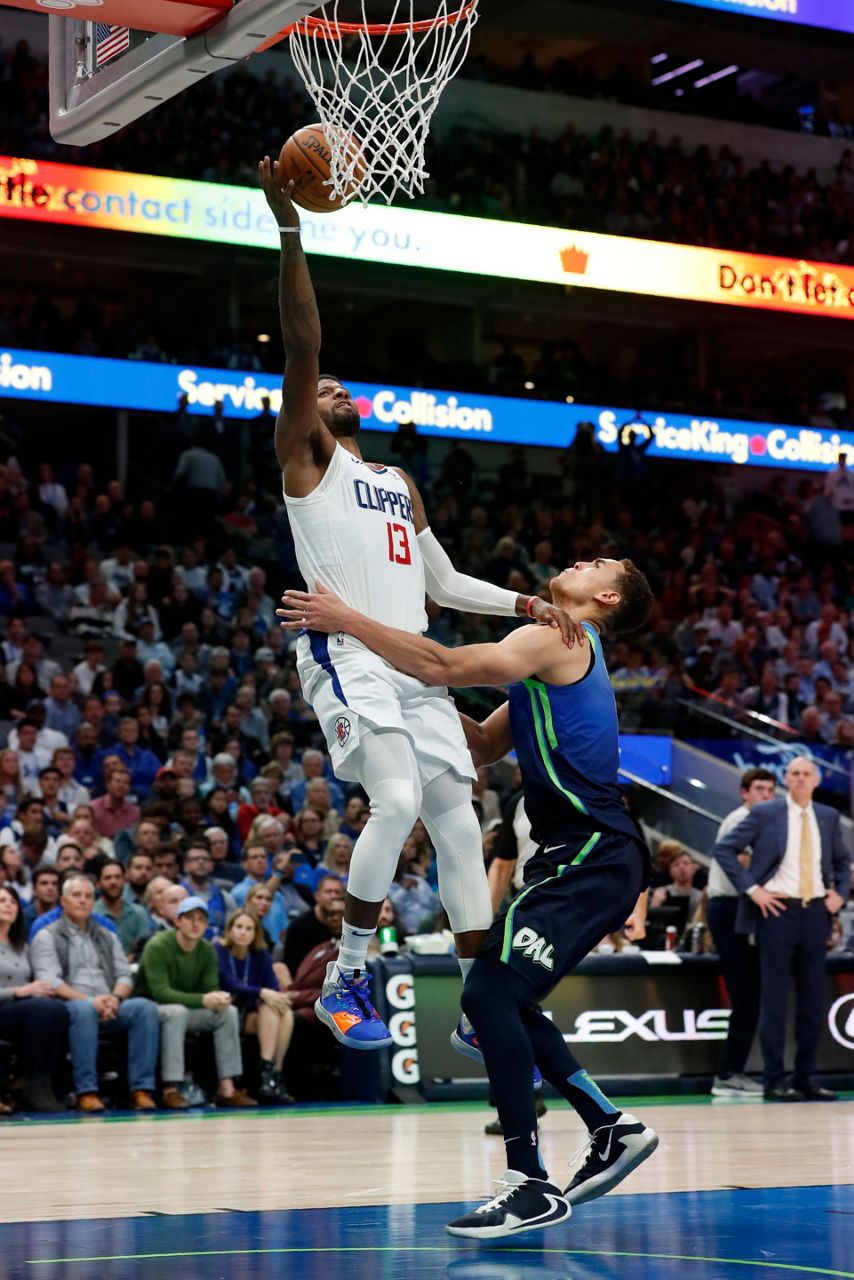 3 of 8
Los Angeles Clippers forward Paul George (13) is fouled going up for a basket by Dallas Mavericks forward Dwight Powell in the second half of an NBA basketball game in Dallas, Tuesday, Nov. 26, 2019. (AP Photo/Tony Gutierrez) 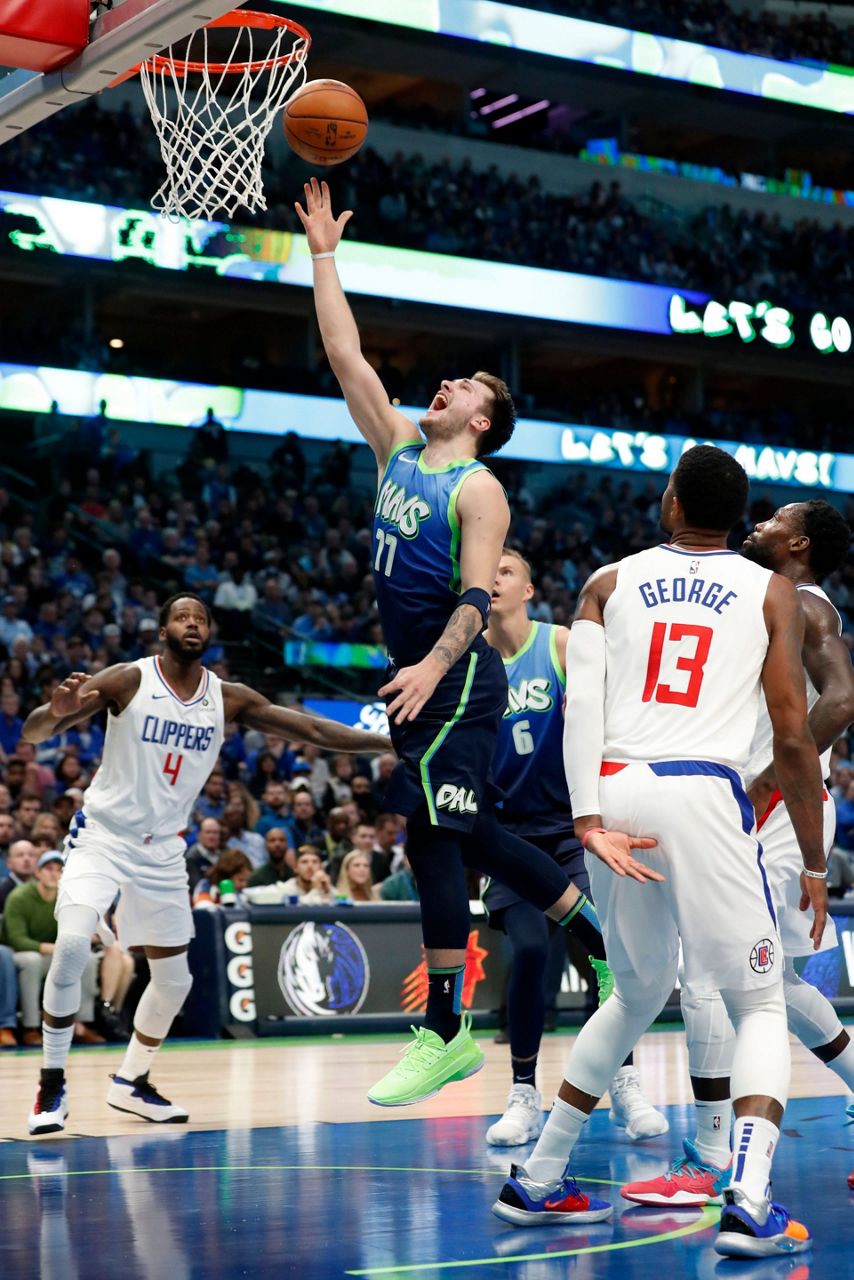 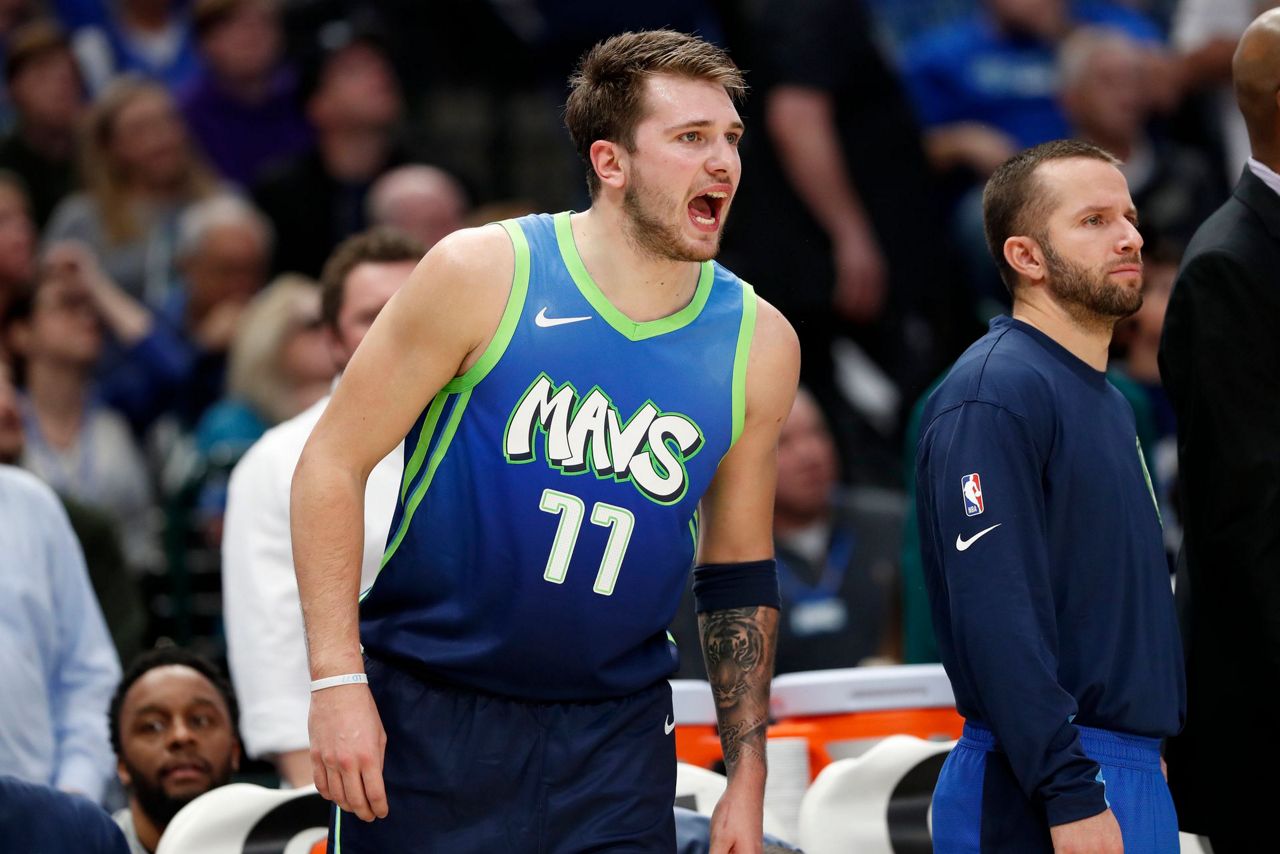 5 of 8
Dallas Mavericks forward Luka Doncic shouts from the bench area at an official during the first half of an NBA basketball game against the Los Angeles Clippers in Dallas, Tuesday, Nov. 26, 2019. (AP Photo/Tony Gutierrez) 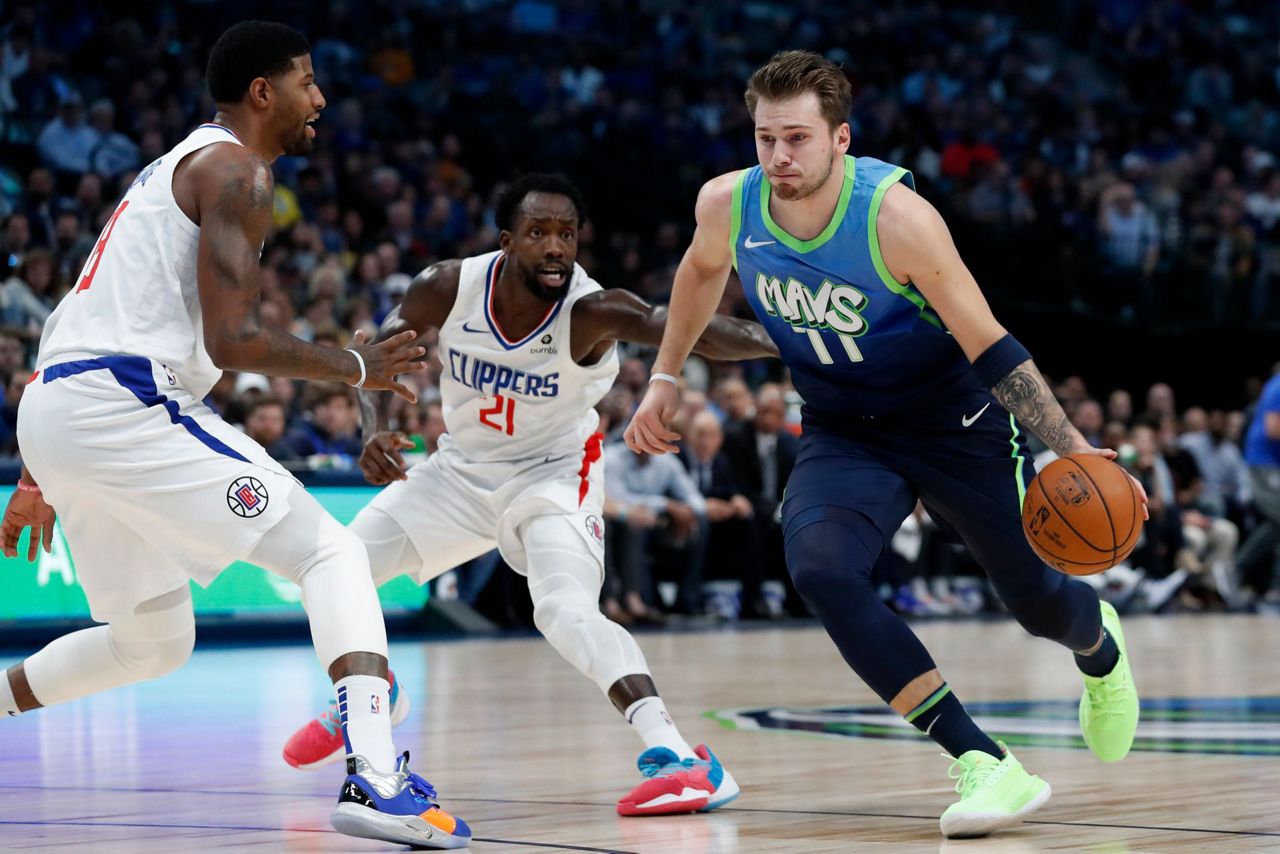 7 of 8
Dallas Mavericks forward Kristaps Porzingis (6) celebrates sinking a 3-point basket in the first half of an NBA basketball game against the Los Angeles Clippers in Dallas, Tuesday, Nov. 26, 2019. (AP Photo/Tony Gutierrez) 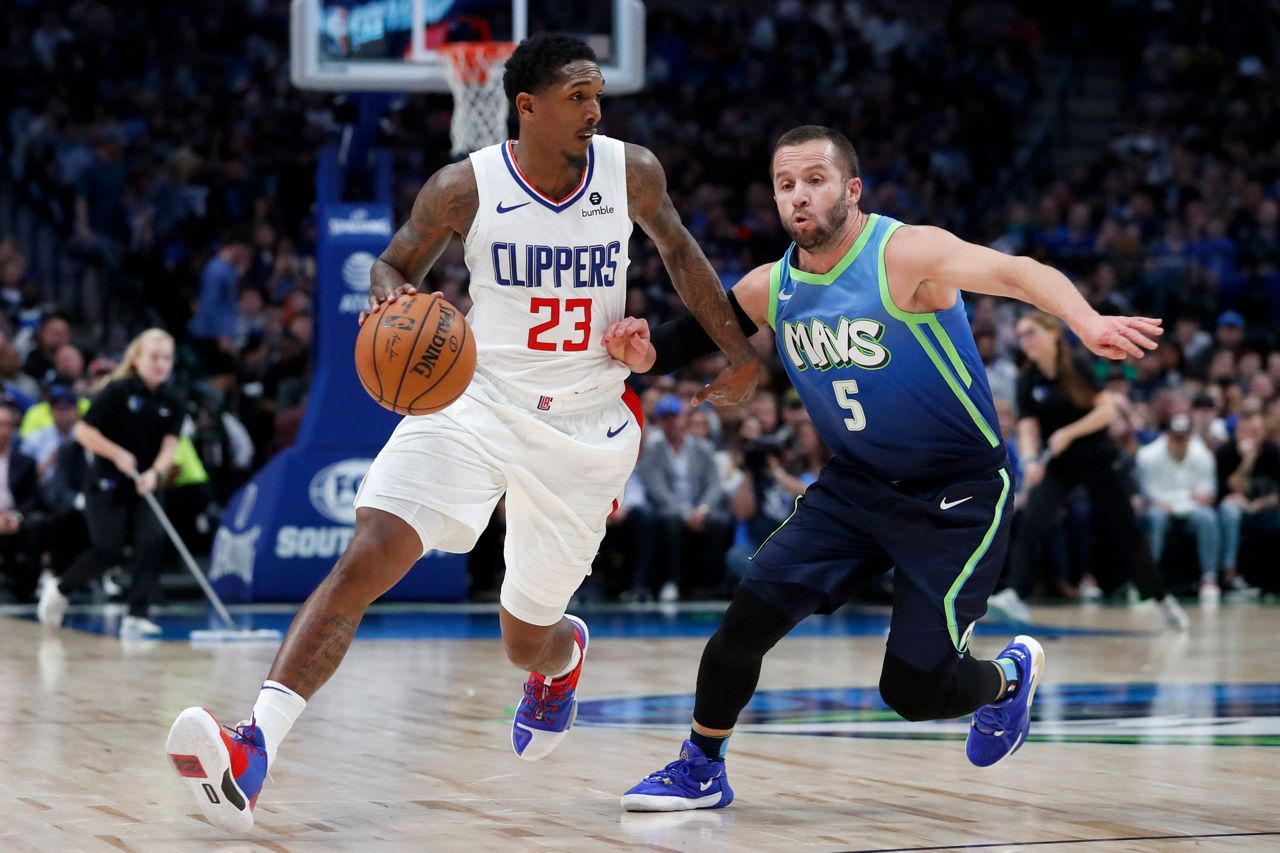 DALLAS (AP) — Paul George and Kawhi Leonard gave the young European duo from the Dallas Mavericks the best look yet at life among the elite in the Western Conference.

George scored 17 of his 26 points in the first quarter, Leonard finished with 28 and the Los Angeles Clippers took control early in a meeting of teams with matching five-game winning streaks, beating the Mavericks 114-99 on Tuesday night.

The Clippers used several defenders to end Luka Doncic’s franchise-record streak of four games with at least 30 points and 10 assists, knocking the 20-year-old phenom to the floor early on a 4-of-14 shooting night. Doncic had 22 points, eight rebounds and six assists.

Kristaps Porzingis was 4 of 13, the 7-foot-3 Latvian combining with the Rookie of the Year from Slovenia to go 8 of 27 compared to 19 of 42 for the LA stars. George added a career-high six steals to help hold the Mavericks under 100 points for the first time this season.

“They’re looking to win a championship; they played like it was a playoff game,” said Porzingis, who hit a 28-footer 22 seconds into the game and another 3-pointer from the logo at center court just before halftime but finished 3 of 8 from long range. He had 15 points and 10 rebounds.

“They played aggressively and they showed us that we have to learn how to play these games. We have to bring that same intensity.”

Patrick Beverley got in foul trouble as one of the defenders assigned to Doncic, who had to settle for doing most of his damage on free throws, making 14 of 16.

Beverley getting his fourth foul early in the second half just brought back Lou Williams sooner. The high-scoring reserve finished with 21 points, going 4 of 7 on 3s while Doncic missed all seven of his deep tries against the LA defense.

“That’s who we are as a team,” said George, who had all four of his 3-pointers in the first quarter. “We pride ourselves on defense. Offensively, we’ve got guys that can score the ball, but we want to make it tough on a nightly basis on whoever we’re playing.”

The Mavericks had taken the Southwest Division lead with a win at Houston for their fifth straight victory, and weren’t too far removed from a loss to LeBron James and the Lakers that required a buzzer-beating 3 to force overtime in Dallas.

But the other expected title contenders from LA offered a dose of reality for a team looking to end a three-season run without reaching the playoffs.

Dallas was trailing by three when Doncic joined the rest of the starters on the bench in the final minute of the first quarter. By the time those five came back together in the second, the Los Angeles lead was 48-32.

The LA bench scored 16 of the 20 points during the run, with Leonard getting the other four. The NBA’s highest-scoring bench finished with 44 points. Dallas, fourth on that list, scored 37 bench points, most with the outcome no longer in doubt.

“They’re big, they’re strong, they’re highly skilled,” Mavericks coach Rick Carlisle said. “They pick you up full court and they hound you. This is a game we’ve got to learn from and do better next time.”

Clippers: Montrezl Harrell scored 12 points two nights after tying his career high with 34 against New Orleans to help finish a sweep of a five-game homestand. ... Leonard had a team high-tying eight rebounds, and Williams had six rebounds and six assists.

Mavericks: Doncic had a third straight game without a triple-double, the longest run without one this season for the NBA’s leader in that category (seven). ... Dallas shot a season-low 38 percent. ... Seth Curry scored 13 off the bench, and J.J. Barea had 12.

Doncic committed seven turnovers and has six games with at least six turnovers this season. The Mavericks had 20, two off their season high in their second game with at least that many.

“Wanted to do the best job we could on Luka,” Leonard said. “He’s been killing it lately, playing at a very, very high level. We just wanted to make it difficult for him tonight, get some deflections and I think we were able to do that.”

The Clippers led by double digits most of the last three quarters, peaking at a 24-point lead with three minutes to go in the game. George put LA in front for good with a 3-pointer for a 23-21 lead with 4:25 left in the first quarter.

Clippers: At Memphis to finish their fourth back-to-back of the season. It’s the second road game in a stretch with seven of nine away from home.

Mavericks: At Phoenix on Friday to start their second three-game road trip of the season.

This version corrects the number of turnovers in six games for Doncic. He has at least six turnovers in each of those games, not seven.