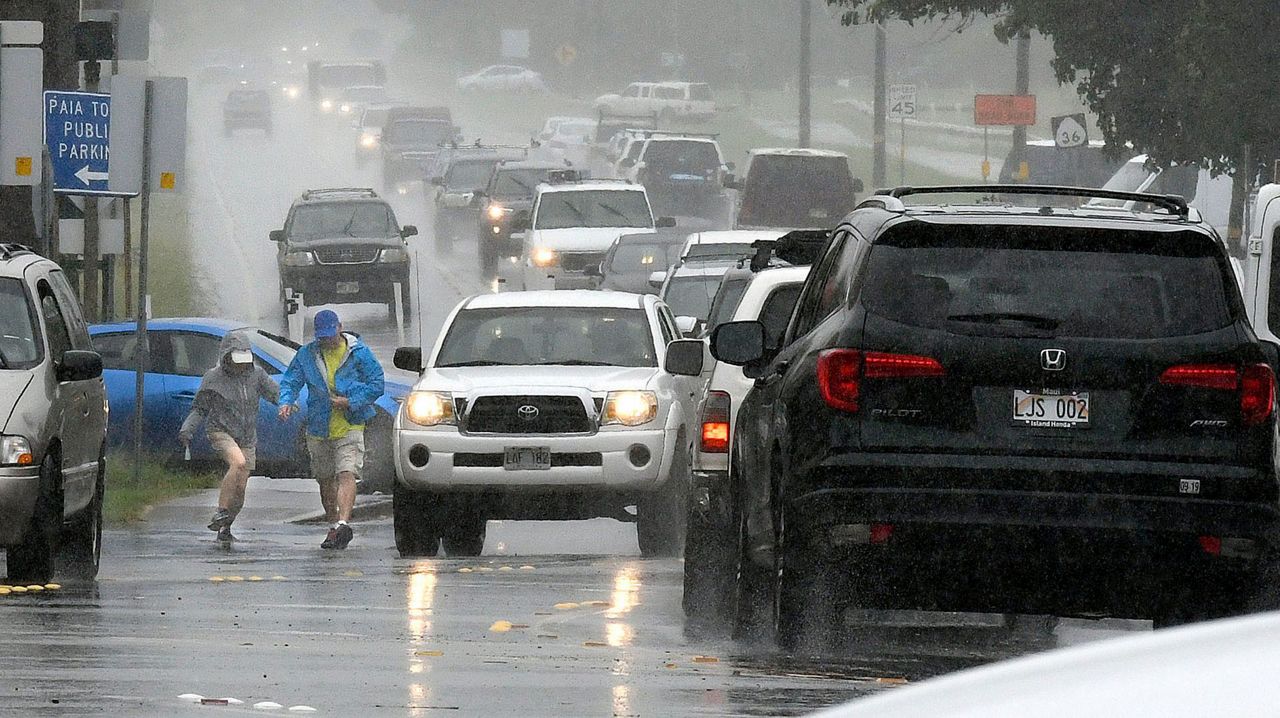 HONOLULU (AP) — Maui was hit with heavy rain and powerful winds Wednesday as a gradually weakening tropical storm neared Hawaii, with forecasters predicting Tropical Storm Olivia could dump 5 to 10 inches (12 to 25 centimeters) of rain. Some places could get as much as 15 inches (38 centimeters).

The downpours started before dawn on Maui and the northern part of the Big Island, said National Weather Service meteorologist Melissa Dye. No rainfall totals were yet available.

"Nature has a real funny way of not giving us advance notice," Arakawa said.

There was steady rain and fog outside Maui County Councilwoman Yuki Lei Sugimura's home on the slopes of Haleakala mountain.

"This is more rain than we had with Lane," she said, referring to the hurricane that passed close to Hawaii last month.

Sugimura was bracing for more rainfall and possibly strong winds.

"We're counting our blessings now. We're waiting. We're just watching," she said. "We expect more. It's not over yet."

There were sustained winds of 20 to 30 mph (32 to 48 kph) on Maui, Dye said. The storm, which was a hurricane earlier in the week, has been slowly losing power as it nears the state.

Tropical storm warnings were canceled overnight for the Big Island and Kauai, but remain in place for Oahu, Maui and small islands surrounding Maui.

A flash flood warning was issued for Molokai island, and a wind gust of 51 mph (82 kph) was recorded at the airport on the island of Lanai. The storm was later expected to impact Honolulu and other parts of Oahu, where Dye said some showers were falling.

Schools, courts and government offices were closed in Maui County in preparation for the storm.

The National Guard has mobilized personnel and trucks to the east side of Maui, said Herman Andaya, administrator of the county's emergency management agency.

The owner of the only hardware store in the small town of Hana on the east side of Maui said he was determined to stay open so residents could buy tarps, screws or other supplies for their homes.

"I think it's important for us to try to stay open as much as possible, without jeopardizing the well-being of our staff," said Neil Hasegawa, owner of Hasegawa General Store.

Despite steady rain overnight, he opened the store normally at 7 a.m. The store lost electricity about a half-hour later and needed to use backup generators, he said.

Residents were bracing for the community with a population of 1,200 people to take the brunt of the storm, Hasegawa said. But he was feeling relieved the rain wasn't as hard as he feared.

"It's way better than I expected," he said. "We're not out of the woods yet ... I'm hoping —it seems like it's going to keep going north."

Hana is a popular day-trip destination for travelers staying in Maui's resort towns. But Hasegawa urged people who don't need to be in Hana to stay away because they could become trapped and take up limited shelter space.

People were mostly staying off the roads, Hasegawa said. The state Department of Transportation said crews cleared a landslide on Hana Highway and reported there were some fallen trees.

The Seattle couple stocked their hotel room mini-fridge with munchies and bottled water, "just in case we can't go out," Huston said.

They tried to get more sightseeing done Tuesday in case they're stuck at their resort in Wailea on Wednesday.

"It sucks but there's nothing we can do about it," Huston said. "It's better than Seattle rain."

Public schools on the Big Island, Oahu and Kauai will be open.

"We don't want to overreact and tell everyone to stay home when maybe it's not going to be as bad," said Caldwell.

On Oahu, Nakoa Ching prepared for the storm with a hurricane kit, food and stoves and had friends with generators.

"We cleaned up all the loose material, put (it) in the sheds and stuff but we didn't go buy and invest in plywood or anything like that. It is what it is, you know," Ching said.