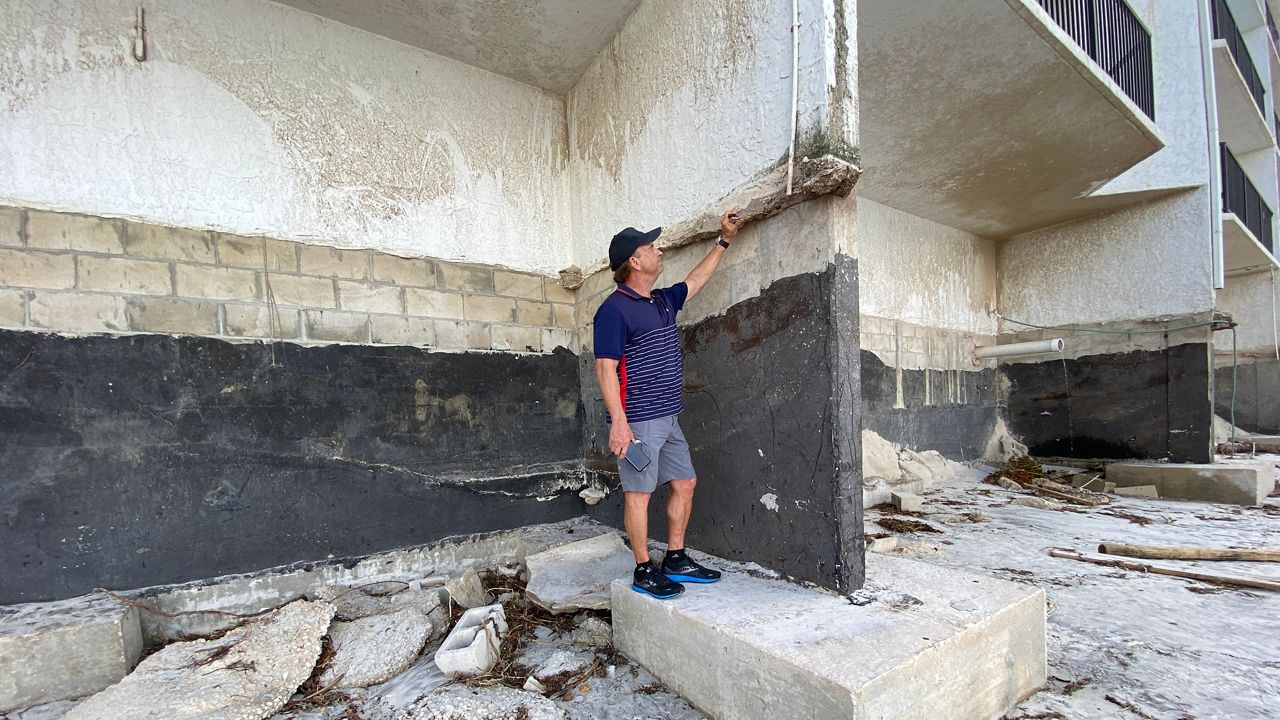 NEW SMYRNA BEACH, Fla. — Before Hurricane Ian hit Florida in late September, Las Brisas board member Curt Lentz says the condominium association had already been pushing for the construction of a protective seawall.

They’d wanted to build one for years, Lentz said, but Florida Department of Environmental Protection (FDEP) didn’t deem Las Brisas “vulnerable” enough for a seawall — that is, until Ian swept away a chunk of sand dune separating the oceanfront property from the water.

“All of a sudden, we qualified,” Lentz said, adding that they found out just last week.

But soon enough, Hurricane Nicole came sweeping away even more of the sand dune and land beneath the building. Now, the two waterfront buildings at Las Brisas have been deemed officially unsafe by Volusia County officials. The other three residential buildings on the 42-unit property are safe, Lentz said.

The level of damage wrought by Nicole was a shock to Lentz, the condominium board secretary and longtime resident at Las Brisas.

“We’ve been very lucky with hurricanes,” he said. “I’ve been here 20 years and we’ve had one or two swipe us, but nothing like Nicole.”

Several high-rise buildings with seawalls just down the beach from Las Brisas had no notable damage from Nicole, Lentz says — leaving him and some other residents wondering what could have gone differently, if their property had also had one.

“If we had (the seawall) now, or if we would’ve had it, we wouldn’t be looking at this today,” Lentz said. “We’re one of the few (buildings) on this part of the beach that doesn’t have a seawall.”

Although he says he’s grateful FDEP finally agreed that Las Brisas is vulnerable enough for a seawall, Lentz said he wishes they could have gotten the green light sooner — before the oceanfront properties suffered so much damage, and residents had to evacuate.

“It has been a real challenge,” Lentz said. “In my opinion, there are too many regulations and procedures for a seawall to protect the community.”

But some Las Brisas residents say some blame also lies with the association’s board of directors, who they say did not move quickly enough to identify an alternative emergency solution that could have prevented some damage.

After Ian struck, resident Tracy Baxter says she sought information from local and state government agencies about any resources they might have to help. Volusia County has limited authority from FDEP to issue permits for temporary, non-structural measures to prevent erosion, according to its website.

Baxter said she learned that leading up to Nicole, Volusia County could expedite permitting for those emergency measures, including placement of extra sand. She said most Las Brisas homeowners were in favor of pursuing temporary protective measures for the buildings, in lieu of a seawall.

“I polled all of the owners and the majority said, ‘Yes, we want something ASAP,’” Baxter said. “We were never opposed to the seawall. We just wanted to discuss options.”

Baxter listed coquina, geotubes and dune restoration with aquatic vegetation as possible temporary solutions she’d hoped board members would explore – but they didn’t, she said. She said there’s still a long process ahead before the seawall could be installed.

Now, Baxter’s worried she and the other condo owners will have to get through next year’s hurricane season without sufficient protection.

“The odds of us getting the seawall done between now and March 1, which is the beginning of the turtle nesting season, is going to be difficult,” she said.

The cost of coastal living

Lentz said he is confident that the seawall will get built before turtle nesting season — and that displaced Las Brisas residents will eventually be able to return home, after an engineer hopefully signs off on the building’s structural integrity.

“We’ll build it back better, increase the property value and safety,” Lentz said. “We’ll be fine, but the homeowners have to pay for (the seawall), and it’s not gonna be cheap.”

Lentz estimates building the seawall would cost as much as $1.3 million.

The Las Brisas buildings were built in 1983, Lentz said, making them just about as old as Champlain Towers South was in Surfside when it collapsed last year.  In response to that tragedy, Florida legislators passed Senate Bill 4-D earlier this year, which requires coastal condo buildings three stories or higher to pass milestone inspections once they turn 25 years old, and again every 10 years afterward.

Also required under the new law: Condo associations must keep enough money in their reserves to fully fund all structural repairs deemed necessary by a qualified engineer.

Before 2025, associations must undergo a structural integrity reserve study, to ensure they have enough funds to cover needed repairs.

“I think sometimes, we want to get the best of both worlds,” he said. “We want to be able to build on the coast, but also be able to have some of that economy. And sometimes, when you’re unfortunately building in areas that are subject to natural hazards, you can’t always have it both ways.”

Lentz says he’s confident the condo association will be able to comply with the state’s new milestone inspection requirement — hopefully, within the next six months.

“We’re going to comply with the state’s wishes. We’re confident,” Lentz said. “We’re about safety here — that’s what we do.”

He said the first priority is getting the waterfront buildings back to a livable condition for the displaced residents.

“Get the people back into their homes, that’s No. 1,” Lentz said. “We want to get them back, but it’s gotta be safe.”