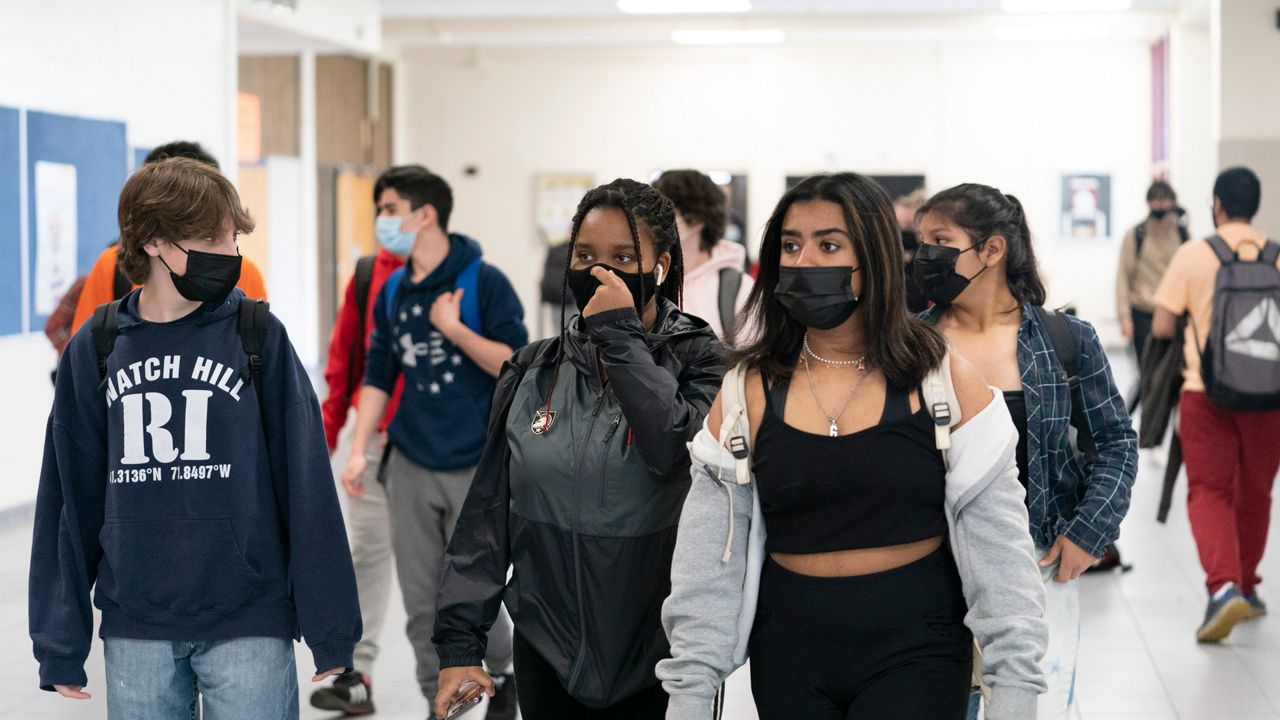 The state has already withheld school board member salaries in Alachua and Broward counties for not complying with the mask mandate and voted Thursday to keep some funds from Orange and Brevard school districts, too. (File photo)

Florida BOE votes to withhold some funds from Brevard, Orange, other school districts

TALLAHASSEE, Fla. —  The Florida State Board of Education voted Thursday to withhold funds equal to any amount of grants from the federal government from eight school districts that have mandatory mask mandates, including Orange and Brevard county public school districts.

Education Commissioner Richard Corcoran said the districts are violating a Florida Department of Health rule which requires school districts to give parents and guardians the ability to opt their children out of wearing a face mask at school.

The board gave the school districts 48 hours to comply or face financial penalties.

The board just approved punishment for Alachua County Public Schools. They will be withholding state funds equal to any amount of grants from the federal government. @MyNews13

But @EducationFL voted anyways to punish @BrevardSchools in the same way as Alachua. @MyNews13

The BOE also voted to withhold funds from Orange County.

But as with Alachua, Brevard and others, @EducationFL votes to penalize @OCPSnews in the same way. @MyNews13

"Florida law gives this board the authority to enforce the Education Code, the rules derived from the Education Code by withholding state funds in any amount for as long as the school district is unwilling to comply with the law," Corcoran said.

The state is threatening to withhold a portion of school board members salaries as well as cutting funding to offset any aid from the federal government through the Biden Administration's Project SAFE grant program.

"By their own terms, these grants encourage school districts to violate Florida law," Corcoran said.

The state has long said disciplinary action could come if districts do mask mandates without a parental opt-out option.

The Florida Department of Education sent a letter to each district it says is in violation, saying if the state board agrees, it should consider withholding "state funds equal to 1/12th of all school board members' salaries, as well as withholding state funds in an amount equal to any federal grant funds awarded to the district."

The board withdrew votes on three school districts that were initially supposed to be up for penalties — Hillsborough, Sarasota and Indian River counties — because they changed their mask policies and are now in compliance.

The issue appears destined to continue to face legal challenges.

The U.S. Department of Education informed Corcoran in an email that the state board's actions could violate the Elementary and Secondary Education Act.

"It has come to our attention that the Florida Department of Education (FLDOE) is seeking to increase its penalty for school districts that are working to protect the health and safety of their students by adopting CDC guidance for preventing the spread of COVID-19," USDOE official Ian Rosumblum wrote. "Specifically, FLDOE’s recent 'probable cause' memoranda to State Board of Education members in advance of (Thursday's) Board meeting requests approval for 'withholding state funds in an amount equal to any federal grant funds' awarded to support school districts in their efforts to promote student safety and well-being.

"This issue raises legal concerns with regard to section 8522 of the Elementary and Secondary Education Act (ESEA), which states that: 'A State shall not take into consideration payments under this Act (other than under Title VII) in determining the eligibility of any local educational agency in that State for State aid, or the amount of State aid, with respect to free public education of children.' Please note that Project SAFE funding is provided from Title IV of the ESEA.

"As always, the U.S. Department of Education stands ready to support you and your LEAs in sustaining safe in-person instruction for all students and meeting their social, emotional, mental health, and academic needs during this critical time."

Parents opposed to the mask policies in Brevard and Orange counties continue to fight them. An emergency petition representing nearly 20 parents has been filed in the 5th District Court of Appeals, which has jurisdiction in Brevard and Orange counties, against the school boards in those counties. The petition demands that the boards start following state rules that say parents have sole discretion on their children wearing masks in school.

Matt Dawley, who has an 8-year-old and a 5-year-old attending Challenger 7 Elementary School in Port St. John, is part of the group of petitioning parents upset that those districts are not following FDOH rules by giving parents an “opt-out” from school mask mandates and leaving it to parents to decide what's best for their children.

Dawley said he's disappointed the Brevard County School Board voted to extend the mask mandates this week, even after his group’s attorney sent a letter days before demanding the board come into compliance.

He added that he's confused why the board is abiding by the FDOH rule on quarantining, but not its policies on masks.

"I am never going to support an elected official or body that compels the majority of people to do something that is not only against their will, but is against their freedom and civil liberties," Dawley said.

An attorney for the group that filed the lawsuit further explained the reason for the litigation.

"They (Brevard and Orange school boards) decided to continue with their mask mandate earlier this week, despite the rule," attorney Nick Whitney said. "And they've referred to the rule laid out by the Department of Health as a memo that can be ignored. And the parents in these counties find that unacceptable."

School districts defended their policies Thursday as designed to protect the health and safety of their students and staff.

Orange County Public Schools officials released a statement after the Board of Education's vote that expressed disappointment with the state's decision. "The School Board and Superintendent are always concerned about the health, safety and welfare of our students and staff," the statement said. "Based on rising COVID-19 cases at the start of the school year along with advice from local health officials, we believed the best course of action was to require face masks in schools and allow for medical exemptions. We are disappointed in the determination by Commissioner Corcoran and the State Board of Education, but not surprised. Our positivity rates are declining and we will continue to monitor the situation."

Other school superintendents spoke during the conference call meeting of the BOE.

"By the end of the first week and a half of school, it became evident that to keep our students safe and our schools open, we had to make a change," Leon County Schools Superintendent Rocky Hanna said.

Superintendents added that they have other safety protocols in place, but they are not enough.

Palm Beach Superintendent Mike Burke said his district's COVID-19 policies are "reasonable and necessary" to protect students and staff from the virus.

During the meeting, Corcoran said "districts can't pick and choose which parts of the law they want to follow."

Brevard County and Orange County school districts do not currently have a parental opt-out option.

Earlier this week, Brevard County school leaders voted to keep the mask mandate in place for at least another 30 days.

Parents in Brevard County can opt-out of the mask mandate only with a doctor's note, but Brevard County board members said parents would have another opt-out option if cases continue to go down.

The state has already withheld school board member salaries in Alachua and Broward counties for not complying with the mask mandate.