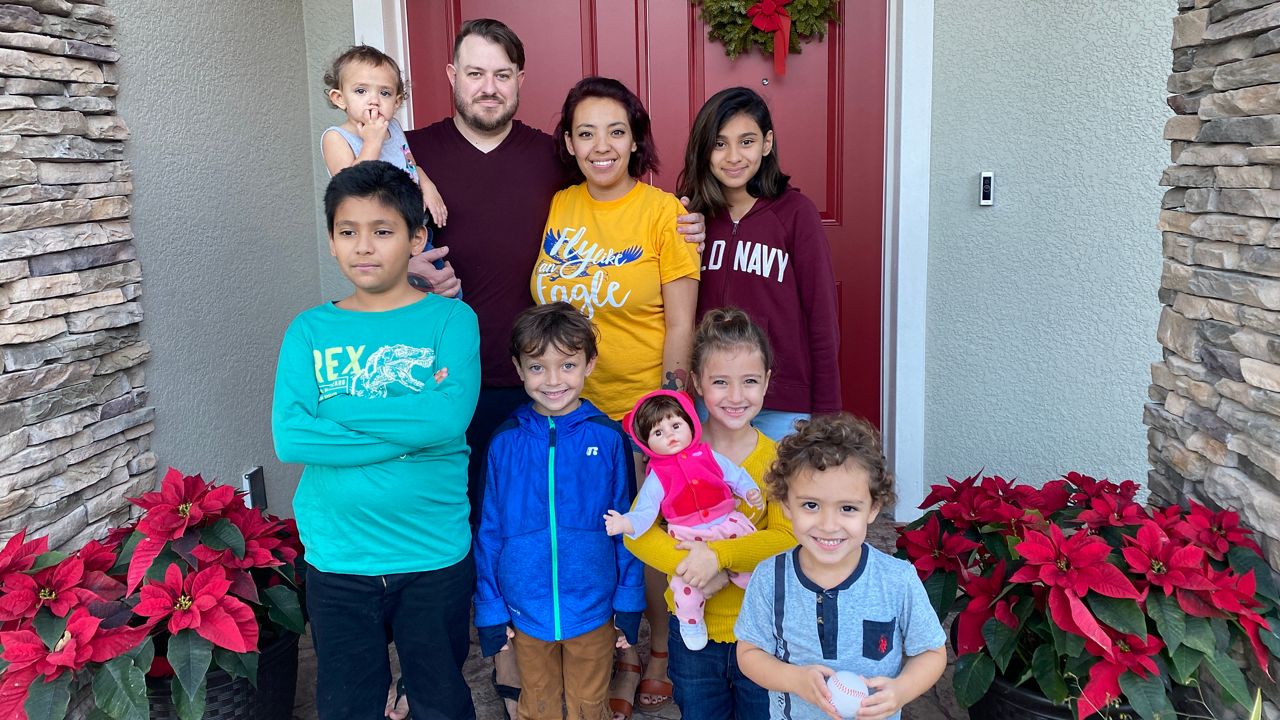 The Beck family stands outside their new 5-bedroom home, given to them by The Home At Last Project. (Molly Duerig/Spectrum News 13)

WINTER GARDEN, Fla. — For medically retired Marine Corps veteran Sgt. Landon Beck, the idea of living in a modern, 5-bedroom home after years of squeezing his family into a double-wide trailer is going to take a little getting used to.

“It’s still kind of unrealistic,” Beck said. “We’re trying to put stuff on the walls and make it feel like it’s ours, but it just still feels like a dream.”

Beck, his wife Jessica, and their six children recently moved into a Winter Garden home built especially for them by The Home At Last Project, an area nonprofit that partners with other local organizations to provide mortgage-free homes for veterans wounded in combat during the Iraq and Afghanistan War.

While serving in Afghanistan, Beck suffered a series of injuries that gave him a traumatic brain injury and chronic pain in his back and leg. He received two Purple Hearts for what he endured in combat. But the accolade couldn’t cure his post-traumatic stress disorder.

Shortly after returning to civilian life, Beck began to struggle. He was accepted into a pre-med program at Stetson University, he said, but before he could get there, his mental health took a downward turn. He ended up dropping out of Daytona State College just two classes shy of completing his associate’s degree, Beck said.

Although he tried to work jobs at places like Home Depot, Beck said he just couldn’t hold down a position.

“I couldn’t work around people,” he said. His PTSD makes him easily frustrated and distracted, particularly around loud noises.

The family ended up losing their car and apartment. They moved into a rundown, double-wide trailer in Crescent City, where they’d spend the next several years.

Now, in their new Winter Garden home, it’s a whole different world. The house came fully furnished, with an enormous brown wraparound couch that can comfortably accommodate all eight family members to watch a movie together. It’s open and spacious, with modern appliances.

It’s the ninth home in West Orange County built by The Home At Last Project, which accepts applications for mortgage-free homes from veterans like Beck. Beck said he had to meet several criteria in order to apply, including having a good conduct record with the military and a severe disability from his time in combat.

Beck is able to cope with his PTSD and chronic pain in large part thanks to his wife Jessica, who essentially embodies the role of caregiver. She’s there to calm Beck down during an episode, remind him to take his psychiatric medication, wrangle their children and everything in between.

“His PTSD is never gonna go away. We know that,” Jessica said.

But for the family, this new home represents a new sense of stability — and a renewed sense of hope for their future ahead.

The Home At Last Project partners with local organizations, including Winter Park Construction and Hensel Phelps, that donate their time, money, labor and other resources to help build homes for disabled veterans.