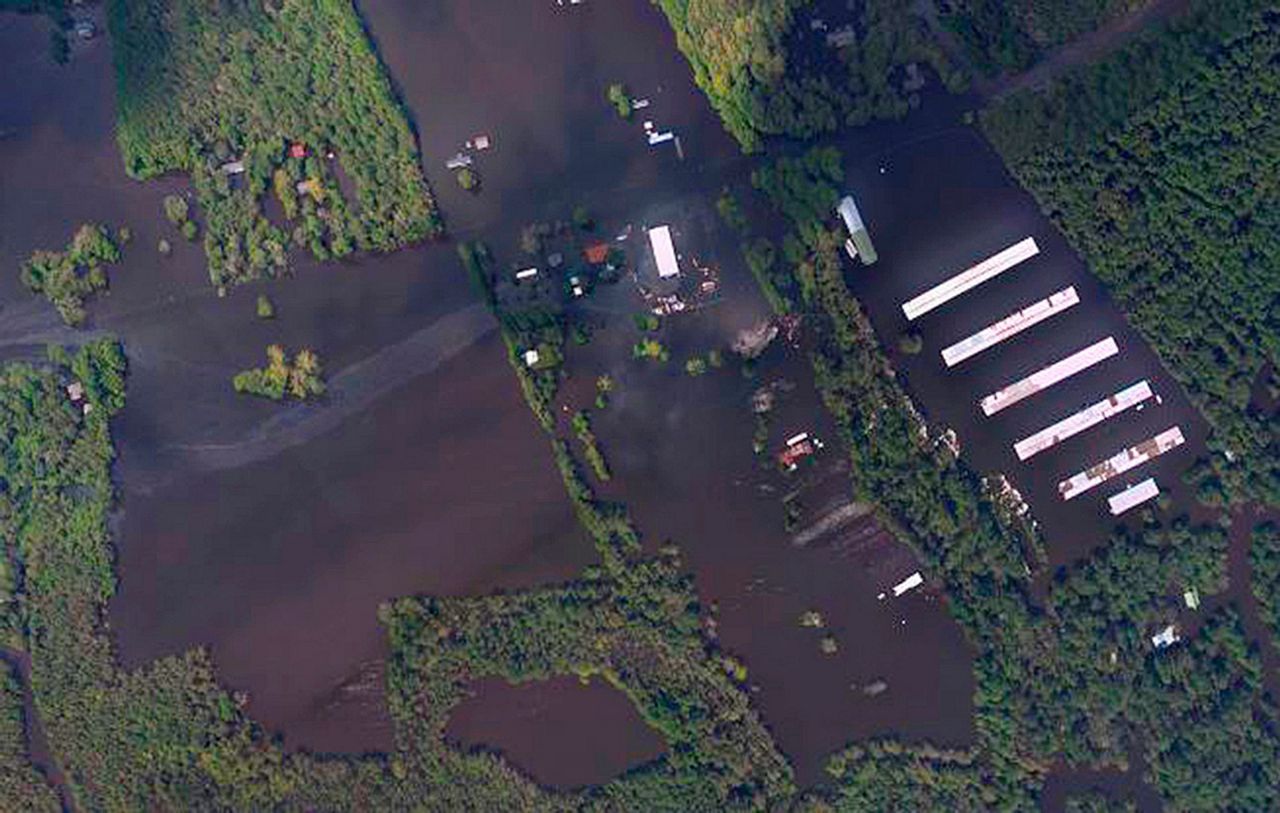 1 of 5
In this aerial photo taken Sept. 18, 2018 and released by the National Oceanic and Atmospheric Administration, an industrial site and a chicken farm outside Wallace, N.C., is seen that has been flooded by the nearby Northeast Cape Fear River following drenching rains from Hurricane Florence. (NOAA via AP) 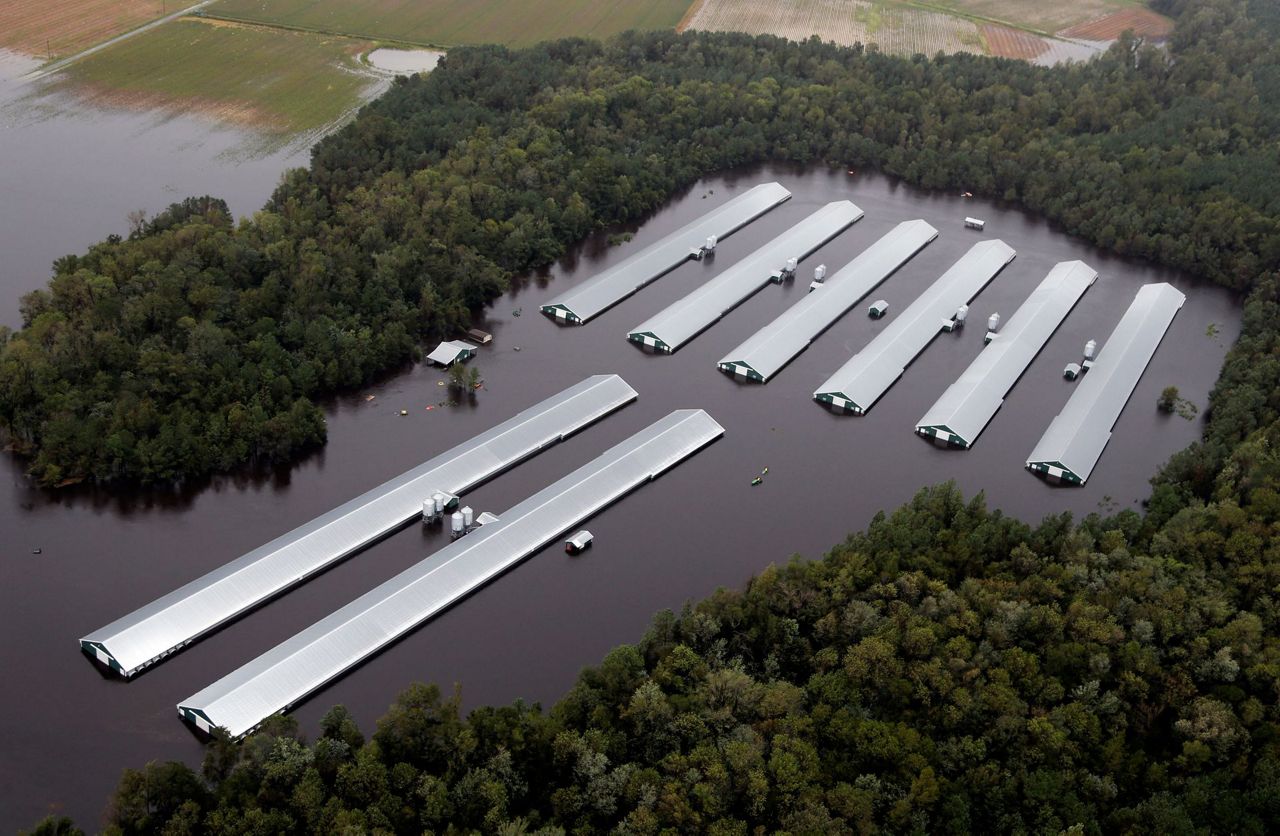 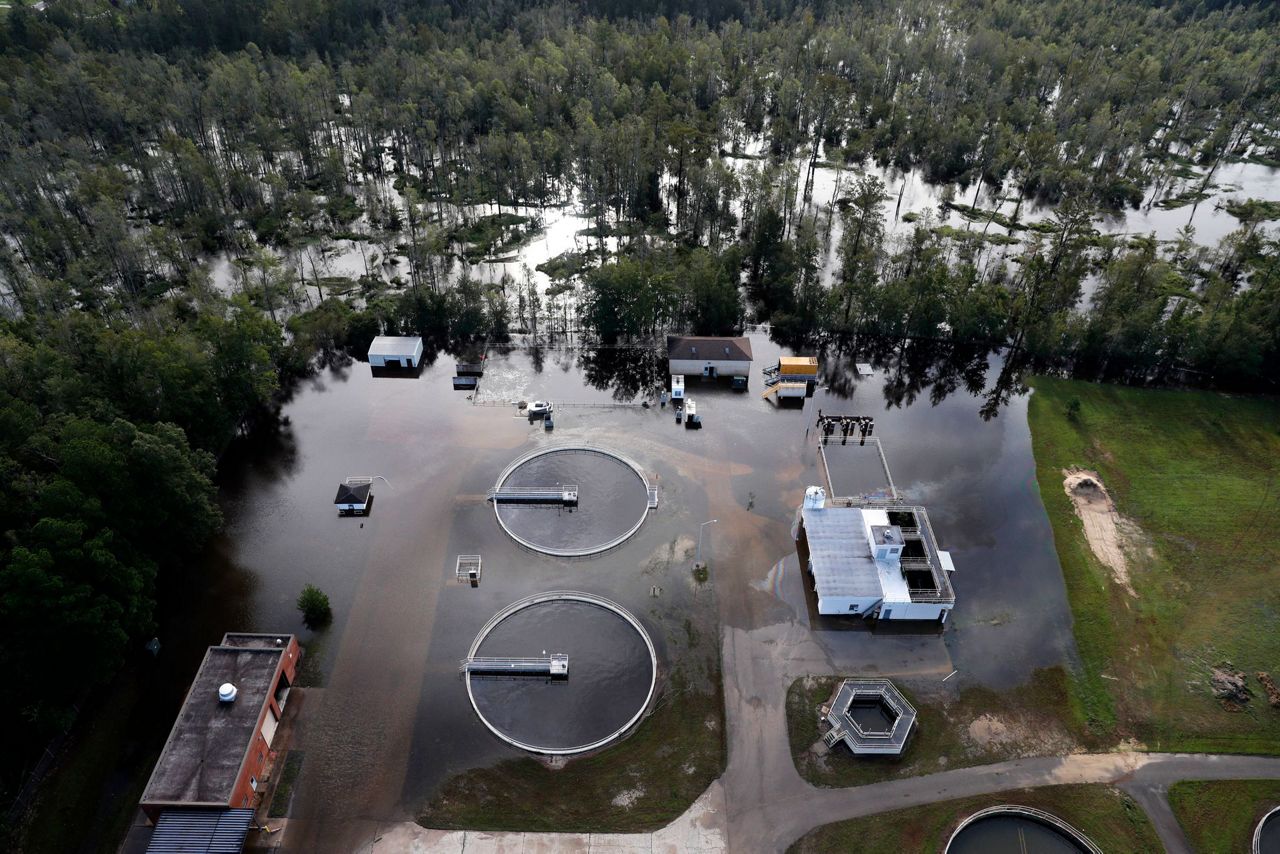 3 of 5
A wastewater treatment plant is inundated from floodwaters in the aftermath of Hurricane Florence in Marion, S.C., Monday, Sept. 17, 2018. (AP Photo/Gerald Herbert) 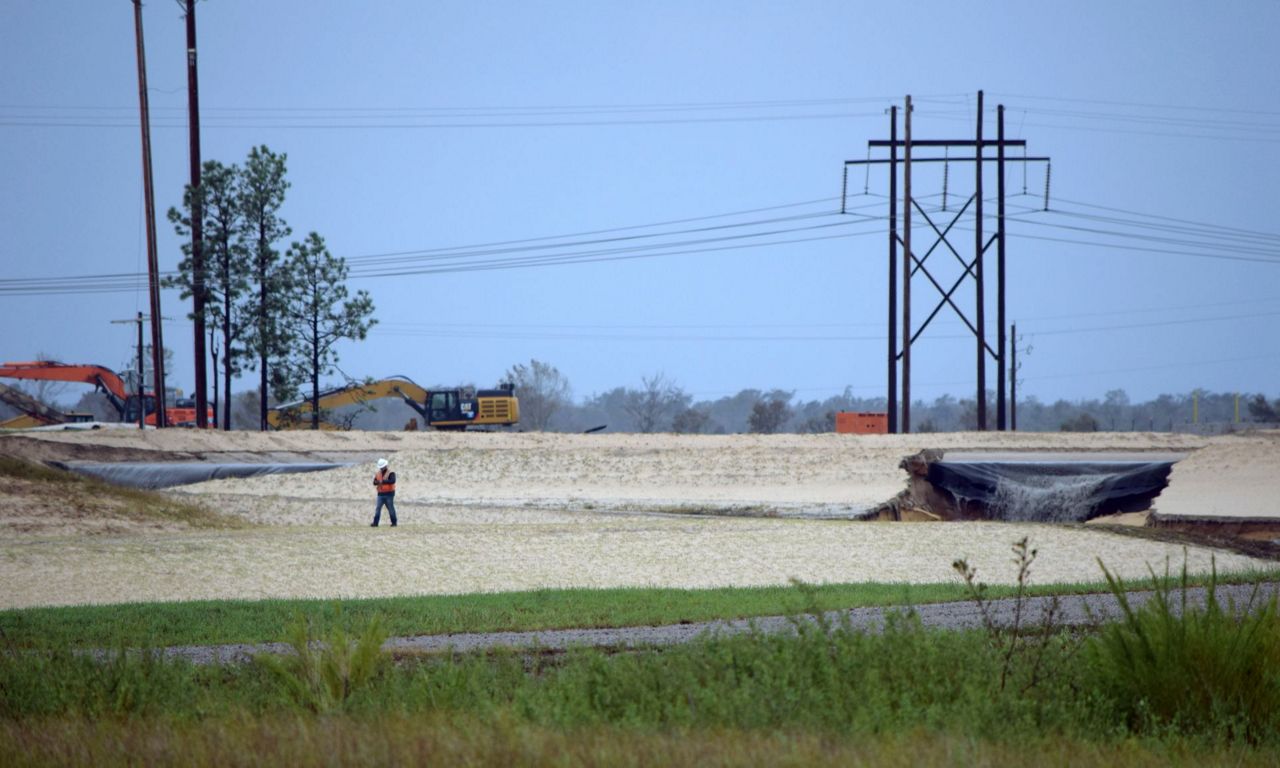 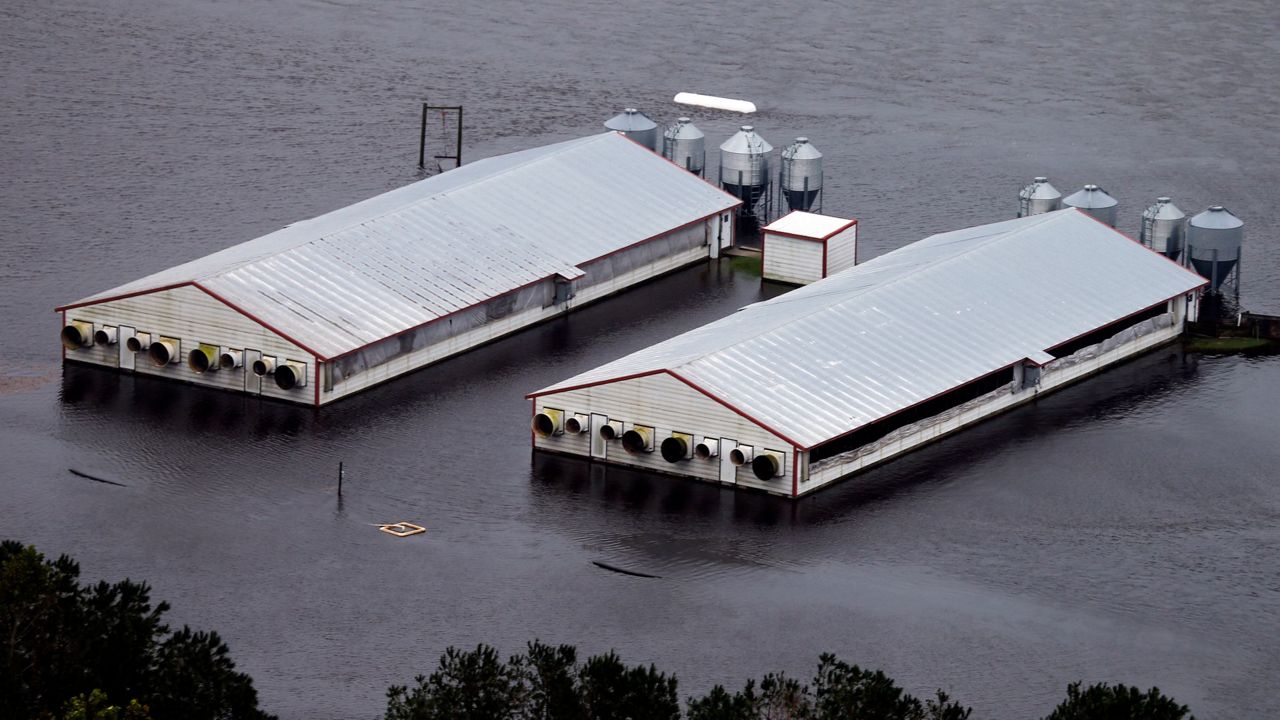 5 of 5
A hog farm is inundated with floodwaters from Hurricane Florence near Trenton, N.C., Sunday, Sept. 16, 2018. (AP Photo/Steve Helber)

However, conditions remain so bad more than five days after Hurricane Florence made landfall that the N.C. Department of Environmental Quality said its inspectors have been unable to visit the hardest hit areas or collect samples of the flood water for lab testing. The agency's regional office in Fayetteville had one foot of water inside, while other locations were without electricity.

"DEQ is waiting for travel conditions to improve ... before we can safely inspect the damage reported by farmers to the hog lagoons," said Megan Thorpe, spokeswoman for the state environmental agency. "Personally, our staff are facing damage to their homes and those who evacuated are trying to get back. Many staff are helping their colleagues with cleanup."

State inspectors were able to make it Tuesday to a Wilmington power plant where a landfill breached last weekend, spilling enough coal ash to fill about 180 dump trucks. Duke Energy said Wednesday that water samples collected by its employees and tested at the company's own lab showed "no evidence of a coal ash impact" to nearby Sutton Lake or the Cape Fear River.

Thorpe said state environmental regulators were waiting on the results of their own testing before determining whether there were any violations of clean water quality rules.

Pressed Wednesday on whether any federal regulators were at work in the flood-impacted areas, a spokesman for the Environmental Protection Agency referred a reporter to a news release about a regional administrator visiting with state officials at an office in Raleigh.

"Water is still rising, flooding is widespread, and lives are still in danger," EPA Region 4 Administrator Trey Glenn said, according to the media release. "The government's first responsibility is to protect lives and the health of the citizens impacted."

State officials said they have received reports that the earthen dam at one hog lagoon in Duplin County had breached over the weekend, spilling its contents. According to figures released Wednesday four other lagoons had the same structural damage. Seventeen had been flooded by nearby rivers and 21 were so full they overflowed. The pits contained hog feces and urine. Large mounds of manure are also typically stored at poultry farms.

About 3.4 million chickens and turkeys and 5,500 hogs have been killed in flooding from Florence as rising North Carolina rivers swamped dozens of farm buildings where the animals were being raised for market, according to state officials.

An environmental threat is also posed by human waste as low-lying municipal sewage plants flood. On Sunday, the Cape Fear Public Utility Authority reported that more than 5 million gallons of partially treated sewage had spilled into the Cape Fear River after power failed at its treatment plant.

The coal-fired Sutton plant was retired in 2013 and replaced with a new facility that burns natural gas. The company has been excavating millions of tons of leftover ash from old pits there and removing the waste to a new lined landfill constructed on the property. The gray ash left behind when coal is burned contains toxic heavy metals, including arsenic, lead and mercury.

Photos from the site provided to AP by Cape Fear River Watch, an environmental advocacy group, show cascades of gray-colored water spilling from at least two breaches at the landfill and flowing toward Sutton Lake, the plant's former cooling pond which is now used for public recreation, including fishing and boating. The lake drains into the Cape Fear River.

Despite Duke's claims of no evidence of environmental harm to Sutton Lake, the company's own lab results show chemicals contained in coal ash were detected in wetlands immediately adjacent to the shoreline. An accompanying map shows the sample Duke employees tested from Sutton Lake was collected from the opposite side of the lake.

"This shows that coal ash remains a problem in North Carolina, all the more so because Duke Energy is still refusing to clean up millions of tons of its coal ash from leaking pits that contaminate our lakes and rivers every day, not just during a hurricane," said Nicholas S. Torrey, a staff attorney with the Southern Environmental Law Center.

At a different power plant near Goldsboro, three old coal ash dumps capped with soil were inundated by the Neuse River. Duke said they had no indication those dumps at the H.F. Lee Power Plant were leaking ash into the river.

Staff from the Waterkeeper Alliance, an environmental advocacy group, visited the site by boat on Wednesday and took photographs and collected samples of gray-colored sludge and water they said was washing off into the floodwaters. The group said the samples would be analyzed by a private lab to determine whether the gray muck contained coal ash.

Duke's handling of ash waste has faced intense scrutiny since a drainage pipe collapsed under a waste pit at an old plant in Eden in 2014, triggering a massive spill that coated 70 miles (110 kilometers) of the Dan River in gray sludge. The utility later agreed to plead guilty to nine Clean Water Act violations and pay $102 million in fines and restitution for illegally discharging pollution from ash dumps at five North Carolina power plants. It plans to close all its ash dumps by 2029.