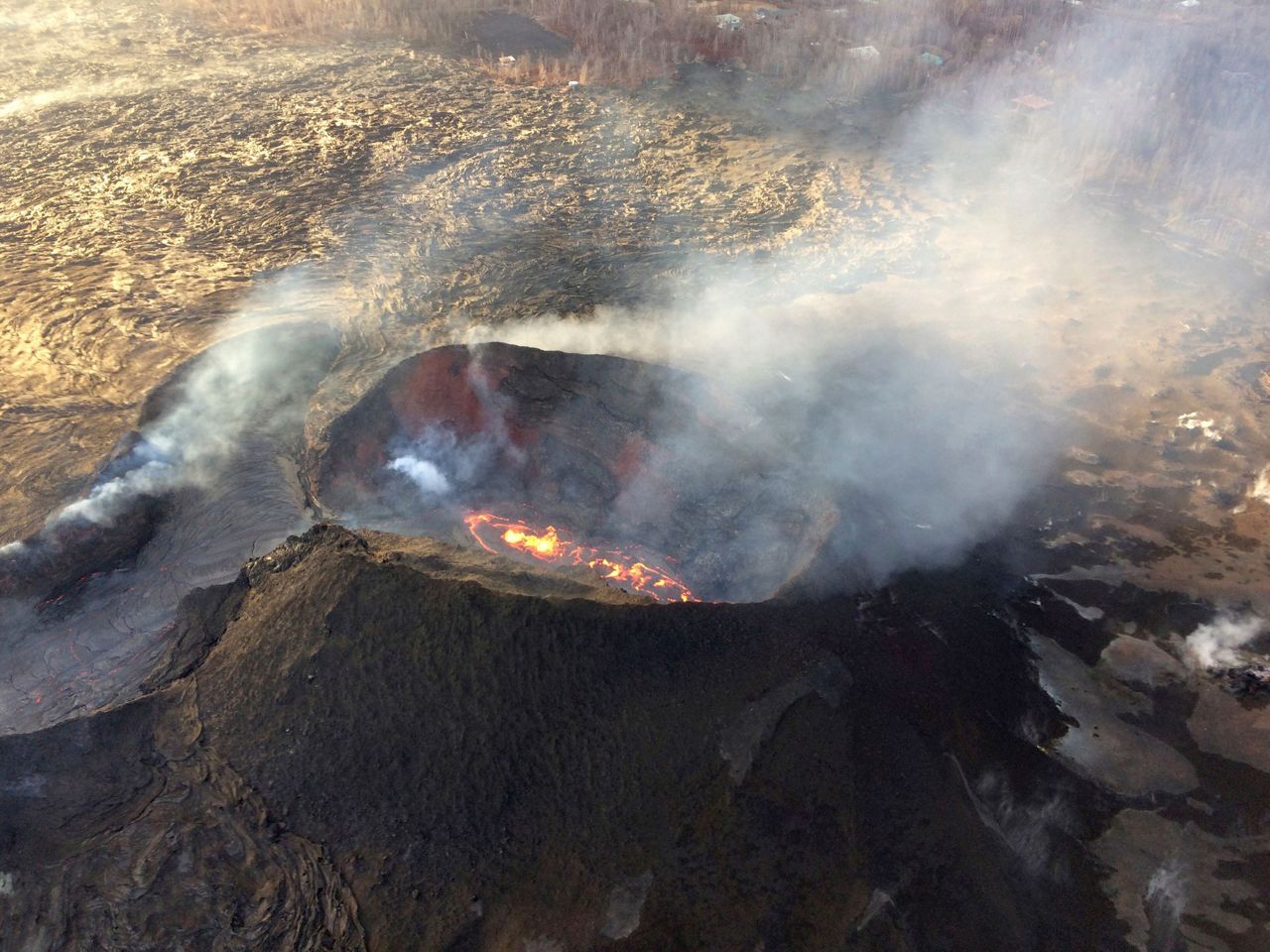 1 of 3
In this Sunday, Aug. 5, 2018 aerial photo provided by the U.S. Geological Survey, lava from the last active eruption site on Hawaii's Kilauea volcano is shown near Pahoa, Hawaii. The volcano changed dramatically over the weekend as lava from the site slowed and fewer earthquakes were recorded across the region. The pause in volcanic activity comes as Hurricane Hector moves closer to Hawaii, a storm that is expected to pass south of the Big Island Tuesday night and Wednesday as it moves westward. (U.S. Geological Survey via AP) 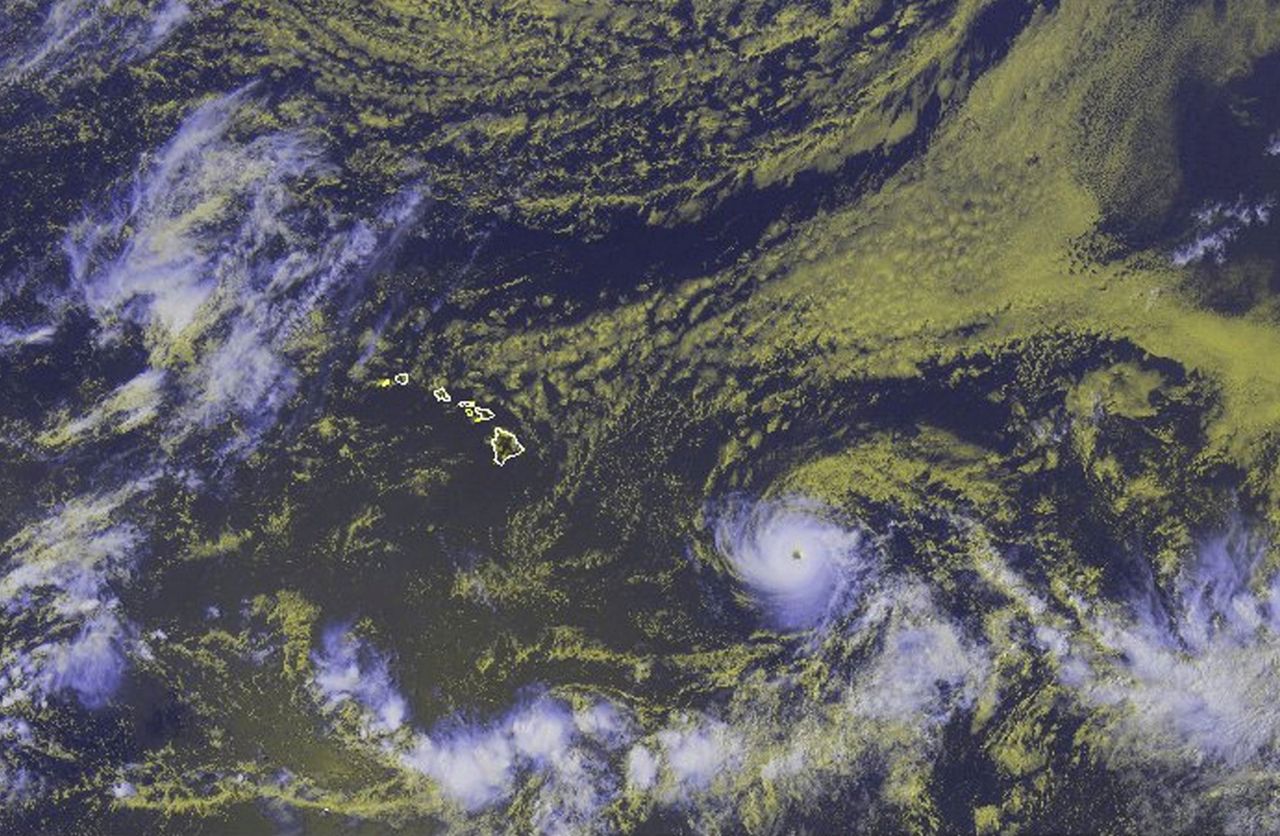 2 of 3
In this satellite image provided by the National Oceanic and Atmospheric Administration, the eye of Hurricane Hector can be seen as the storm moves toward Hawaii, Tuesday, Aug. 7, 2018, at 00:30 UTC. A tropical storm watch was in effect Monday, Aug. 6 for waters south of the Big Island as Hector was expected to pass Tuesday night and Wednesday as it moved westward. (NOAA via AP) 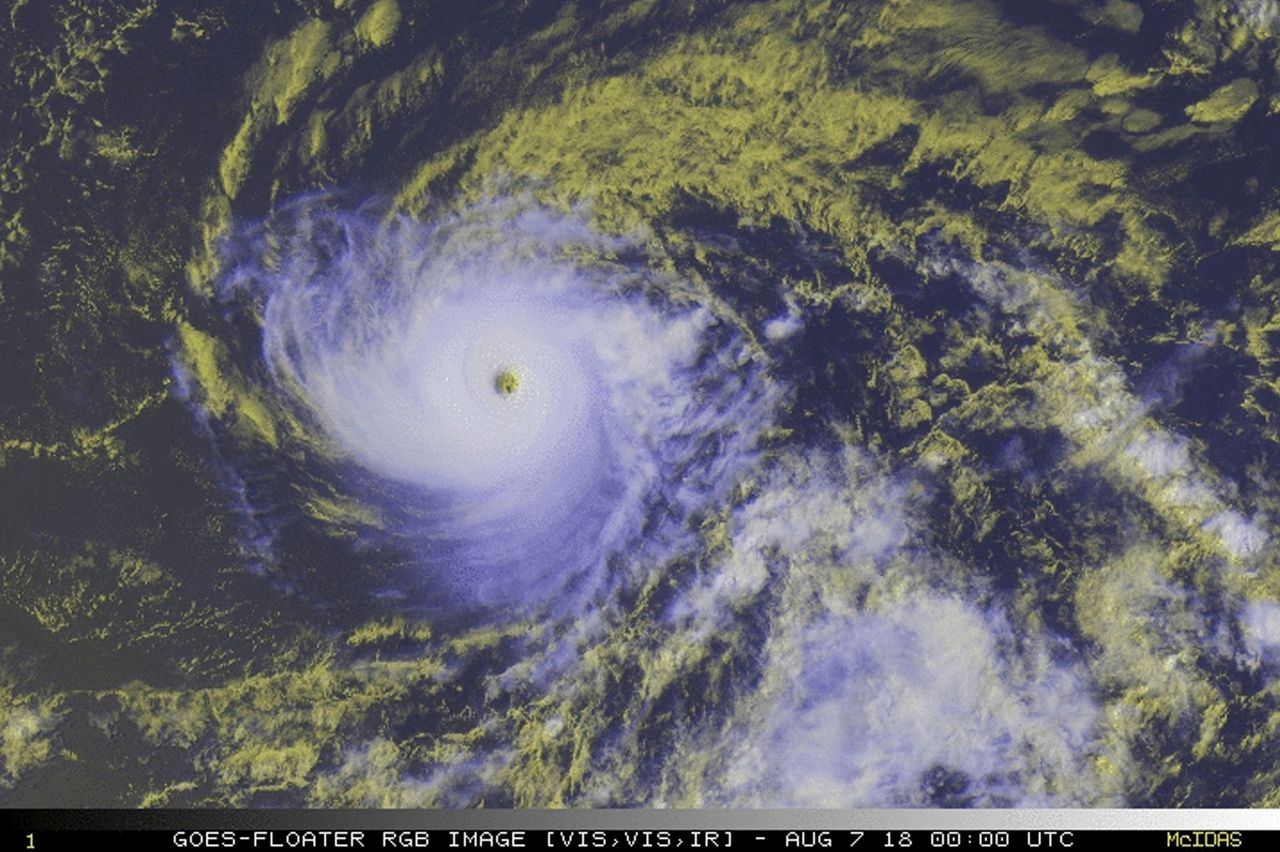 3 of 3
This satellite image provided by the National Oceanic and Atmospheric Administration shows a view of Hurricane Hector, Tuesday, Aug. 7, 2018, at 00:00 UTC. A tropical storm watch was in effect Monday, Aug. 6 for waters south of the Big Island as Hector was expected to pass Tuesday night and Wednesday as it moved westward. (NOAA via AP)

HONOLULU (AP) — Hawaii emergency officials who have been contending with Kilauea volcano's lava flow were preparing for a hurricane that was expected to pass to the south of the islands this week.

Hurricane preparations were underway just as lava from the last active eruption site in a Big Island neighborhood decreased dramatically over the weekend and fewer earthquakes were felt.

"Basically the system appears to have almost shut down completely over the course of a couple of days," said Tina Neal, scientist-in-charge at the U.S. Geological Survey's Hawaiian Volcano Observatory. She likened it to turning off a spigot.

The significance of the change was not yet clear, scientists said, and they were trying to figure out why it's happening.

"It is common for eruptions to wax and wane or pause completely," the observatory said in an update posted online. "A return to high levels of lava discharge or new outbreaks in the area of active fissures could occur at any time."

Meanwhile, a tropical storm watch was in effect Monday for the Big Island as Hurricane Hector was expected to pass Tuesday night and Wednesday as it moved westward.

Hawaii County Mayor Harry Kim said officials would be prepared for whatever nature brings. Neighborhoods that would likely feel the brunt of the storm have been covered by the ongoing lava flow, he said.

"The volcano, Madam Pele, has totally wiped out all the homes that would have been in danger," he said, referring to the Hawaiian volcano goddess, and noting that those neighborhoods suffered a lot of damage when Tropical Storm Iselle hit the Big Island in 2014.

"You accept it. This is nature's way," he said.

The southern half of the island should brace for winds of 35 mph (56.3 kph) or higher, said Melissa Dye, a meteorologist with the National Weather Service. There could also be a few inches of rain into Thursday as Hector passes the island, she said.

Hector is small, but strong, she said, adding that the storm's size could help lessen how far it extends.

Heavy rain could create "white-out conditions" over the still hot lava flows, Neal said. Water hitting lava creates dense clouds of steam that can have sulfur dioxide in them, she said.

The forecast wasn't allowing Punaluu Bakery Bake shop general manager Connie Koi to let her guard down. Even a slight deviation in Hector's path or strength could mean flooded roads and torrential rains and strong winds for Naalehu, a remote southern community.

"I am worried about it approaching our neighborhood," she said. "It's kind of too close for comfort."