Hail coating the ground in the yard of a home in Daytona Beach on March 6, 2021. Picture courtesy of Spectrum News 13 viewer Kathryn Dickerson.

'Tis the season for hail in Central Florida

It is spring, and that is also a sign that Florida's hail season is here.

March 2022 brought a day of hail to much of Central Florida. Viewers sent in dozens of pictures from dime-size to quarter-size hail from storms on March 16.

You may also remember back to March 2021 when hail covered the ground in Daytona Beach.

It looked like snow, but it was a ton of hail that came from a severe storm.

Viewers sent in pictures and videos of the hail pounding the pavement and mounds of small hail collecting in yards, along the beaches and in a parking lot of Publix in Daytona Beach on March 6, 2021. We do not frequently see hail in Central Florida, especially hail larger than an inch in diameter.

However, March through the early part of summer is when we typically see hail events in Central Florida. You may even remember a notable hail event back in 2019. Golf ball and ping-pong ball-sized hail fell in Brevard County on March 27.

The worst and costliest hailstorm in Florida history was back in March 1992.

During this event, hail the size of baseballs (2.75 inches) fell on the University of Central Florida.

The largest hailstone reported on this day was 3 inches in diameter. Most recently, Sanford had a report of 3-inch-diameter hail in May 2020.

The biggest hail seen in Florida was the size of a grapefruit (4.5 inches), according to the National Weather Service in Melbourne. 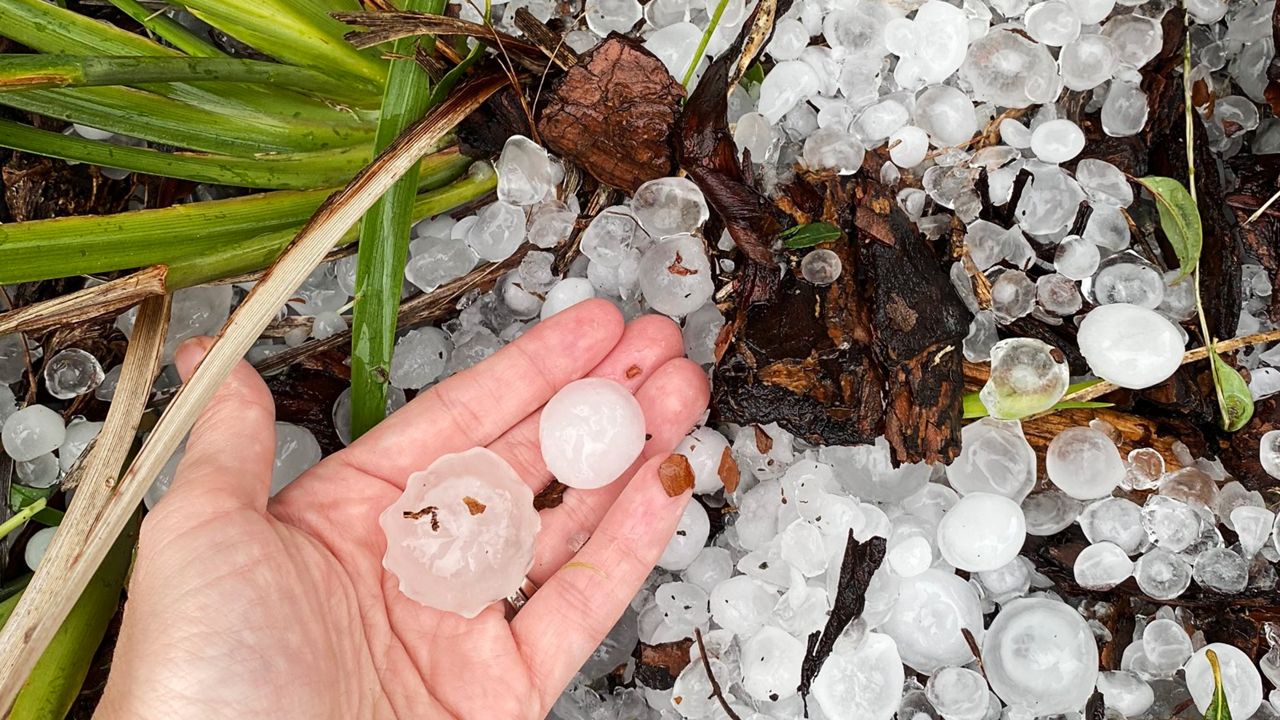 Why big hail is not common in Florida

In order for hail to form, you need extremely cold air higher in the sky.

Hail forms in large thunderstorms that have cloud tops several thousand feet high, in the neighborhood of 30,000 to 50,000 feet high.

In Florida, it is so warm that we rarely see hailstones fall to the ground. Strong winds pull raindrops so high into the sky that ice crystals form where temperatures are below freezing.

Eventually, the hailstones become so large and heavy that they fall to the ground. The hail will melt some as it falls from the sky, from the colder air above into the warmer air below.

Usually, Florida is so warm that the only hail we see is around an inch or smaller.

The most common size hailstone produced in Central Florida is dime-sized, which is about three-quarters of an inch.

So it is not at all uncommon to see hail in Central Florida; however, it is rare to see reports of golf ball and ping-pong ball-sized hail.