Workers began removing what is left of a semi-tractor trailer that was destroyed in one of multiple fatal crashes Thursday on I-95 in Volusia County. (Spectrum News/Will Robinson-Smith)

VOLUSIA COUNTY, Fla. — It was initially reported that smoke from a prescribed burn and fog during the early-morning hours Thursday contributed to multiple fatal crashes on Interstate 95 in Volusia County.

A Florida Forest Service official said in a release Thursday evening, though, that smoke should not have been part of the equation, because all forecasted surface winds would have carried smoke from the nearby burn "away from the interstate."

The release also indicated that the Florida Highway Patrol was told about the prescribed burn Wednesday in a 10 a.m. email.

At around 1:30 a.m., southbound and northbound lanes of I-95 saw multiple crashes near mile marker 244 at Edgewater, FHP’s Lt. Kim Montes said during a press conference Thursday morning.

The northbound side saw four separate crashes involving 11 vehicles. A passenger in one of the vehicles — only identified as a 25-year-old woman — was killed. Many people were injured, including a child who was airlifted to Arnold Palmer Hospital for Children and is listed as stable.

The southbound side had one crash that included six vehicles: four semi-tractor trailers, an SUV and a van. 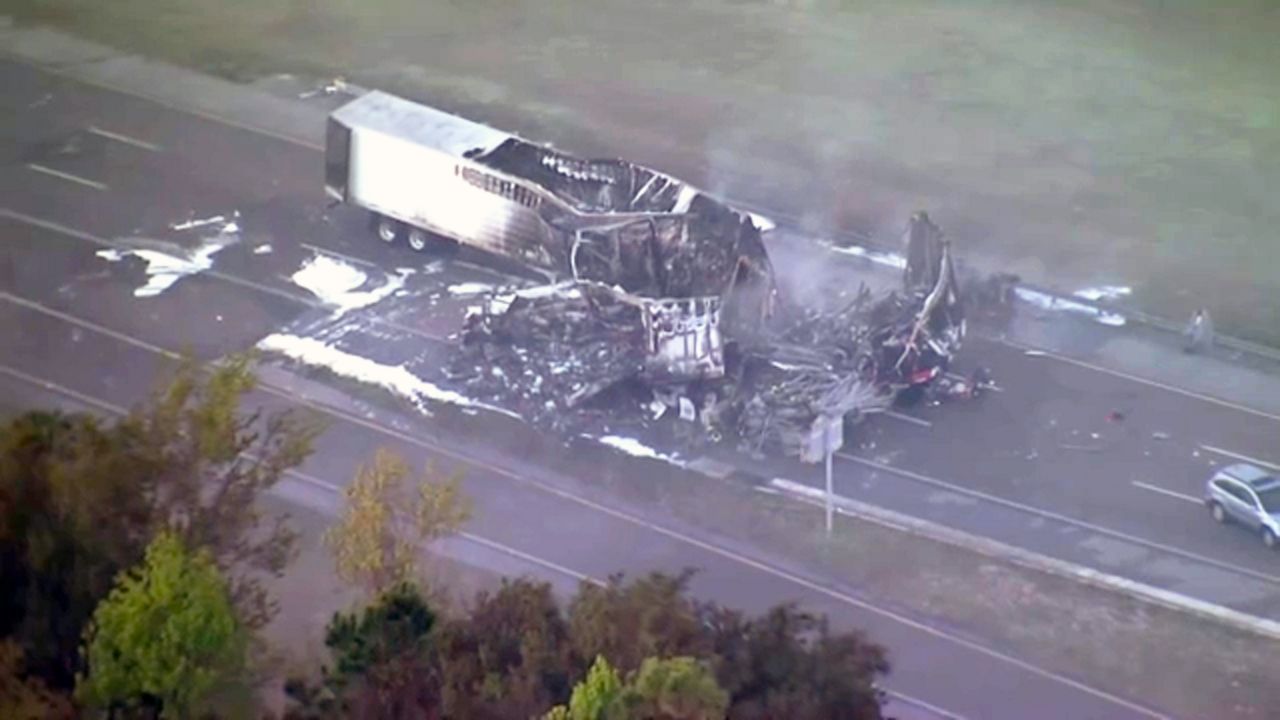 Fatal crashes Thursday occurred in both the northbound and southbound lanes of Interstate 95 in Volusia County. (Sky 13)

A 51-year-old semi driver from Hialeah, Fla., and a 54-year-old Titusville resident driving a 2017 Jeep Renegade were killed, Montes said. FHP did not identify either man by name.

Tow trucks began removing a semi-tractor trailer that burned in that crash on Thursday afternoon. 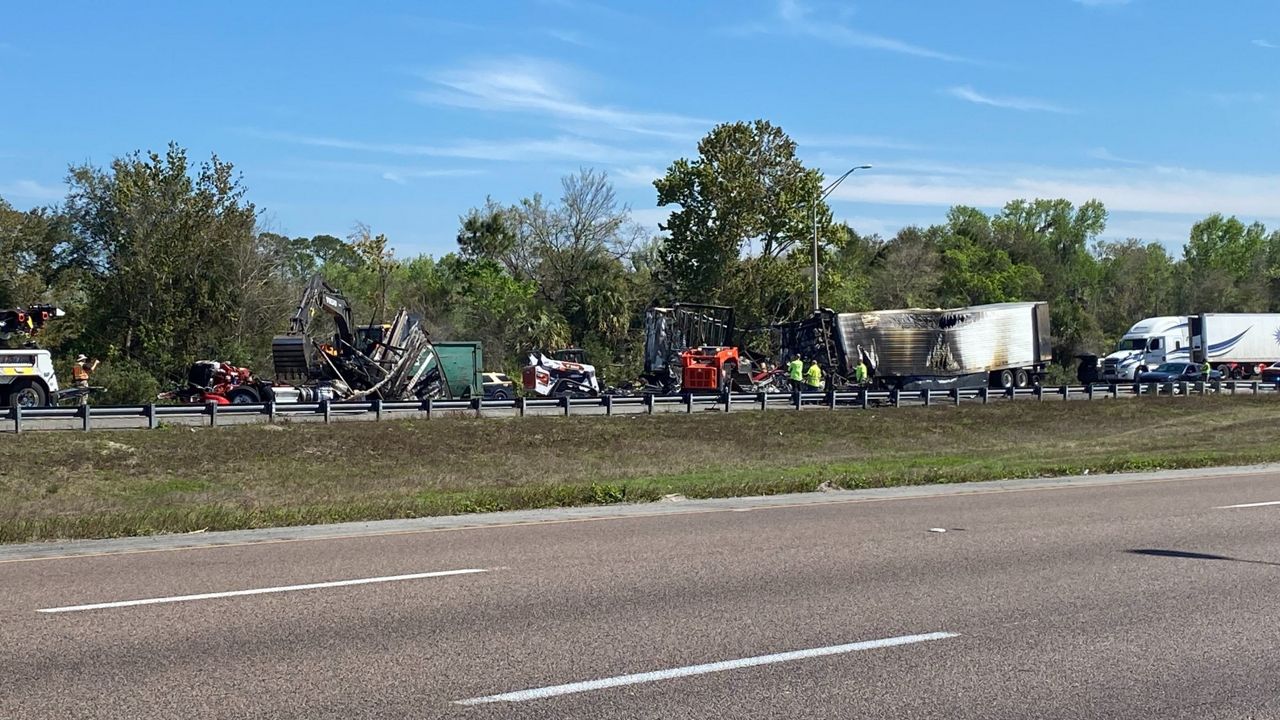 A mix of smoke from a prescribed burn and fog created poor driving conditions, and they are believed to have been contributing factors to the crashes, Montes said.

"What we now know happened is there was almost zero visibility in the area based on smoke and fog that had mixed together, and visibility dropped to zero," Montes said.

The FHP was not notified of a prescribed burn for that area, Montes said, adding that she would look into it to confirm.

A spokeswoman with the Florida Forest Service released information Thursday evening that indicated that was not the case. The burn in question was located 1.25 miles west-southwest of the intersection of I-95 and State Road 442 in Volusia County.

In a release, wildfire mitigation specialist and information officer Julie Anne Allen said that at 10 a.m. Wednesday the "Florida Forest Service sent an email to notify cooperators of all burn authorizations for the day, including Volusia County Fire and Florida Highway Patrol. The email notification includes the location of burns, who owns the property and the certified burner's information."

Spectrum News 13 found that Edgewater’s Fire-Rescue Department posted on its Facebook page a message to people on Wednesday, March 2, at 12:10 p.m. that stated: “The column of smoke you may see west of I-95 is from a land management/controlled burn. There may be some noticeable smoke smell if the wind changes direction.”

The Forest Service release cited information from FHP about a trooper who responded to the area at 9 p.m. and reported the roadway was clear.

Information from the Florida Forest Service also indicated that winds in the area should not have pushed any smoke from the controlled burn into the area of the interstate.

"These winds would carry the main column of smoke in a south, southwest and westerly direction, putting any fallout from the column away from the interstate," the Forest Service release said.

Some sections of I-95 remain shut down.

FHP troopers have already reopened the southbound entrance ramp from State Road 442 to southbound I-95.

Montes added those sections of I-95 could be closed throughout the day and possibly into the evening.

She said that due to the crash and fire, the I-95 northbound lanes have been damaged and once the debris has been removed, those three lanes need to be repaved.

Currently, it is unknown how the crashes started, but an investigation is ongoing.

Montes urged drivers that if they see a mixture of smoke and fog to slow down, turn hazard lights on, do not use high beams, and use roadway markings as a guide if the road cannot be seen.

As sunlight burns away the fog, you can see just how destructive these wrecks were. In the second picture one person died and a child was air lifted to the hospital. I95 is expected to be shut down well into the afternoon and maybe even early evening. @MyNews13 @MyNews13Traffic pic.twitter.com/aI0dlT06eE


She also advised to turn off the radio and to pull off the road completely.SMOKE AND FOG have mixed here on I95 to create extremely low visibility, here is what it was like as @FHPOrlando was escorting us closer to the scene. @MyNews13 @MyNews13Traffic pic.twitter.com/CpGCNjsATa


Traffic is backed up at SR 44 & I95 after 3 separate crashes on SB & NB I95 with 3 people killed. According to @FHPOrlando: Multiple people transported to the hospital, including children.@MyNews13 #Traffic pic.twitter.com/7r5cwEZDek