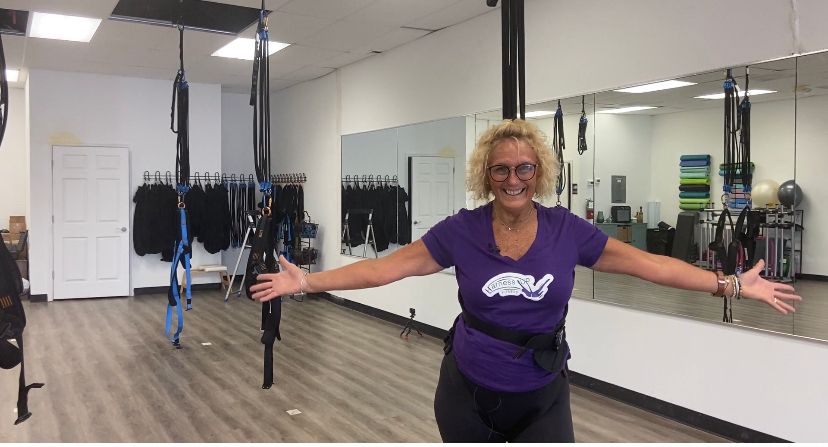 Tammye Harris, a 65-year-old bungee fitness athlete, has been doing it for a year now and she said she can already see results (Bri Macnaught/Spectrum News)

ORLANDO, Fla. — After a long day at work Tammye Harris is buckled in and ready to fly.

“I just like the movements and the freedom to do different things. It’s not going to hurt as long as you trust the bungee,” said Tammye Harris, a 65-year-old bungee fitness athlete.

It’s the latest fitness craze and this group of ladies on the Space Coast are hooked.

“Bungee fitness is low impact, high intensity. The bungee suspends you 50 to 70 percent of your weight when you are at your anchor point. When you are pulling on your resistance it is doubling your weight,” said Liz Braun, the owner of Harness Up fitness.

It's a constant, high-intensity workout where you can burn anywhere from 350 to 700 calories in just one 45-minute class.

Tammye has been doing bungee fitness for a year now and she said she can already see results.

“I see a difference in myself. I feel good. I am looking better. I just really like it. It makes me feel good inside and out,” said Harris.

On the outside you can see her confidence beaming but it’s that powerful light on the inside, that has given her another chance at life multiple times. The first was when she was hit by a car when she was five years old. She broke every bone in her body besides her back.

“They didn’t think I was going to live. I was in a coma for nine months. I woke up and I’ve been fighting ever since,” said Harris. Her second serious fight came recently, a battle with breast cancer but her latest checkup proves once again, she’s a warrior.

“I just went and they said to me, it’s shrinking. And I just started bawling. I am very teary about it now and he said whatever you are doing don’t stop,” said Harris. Tammye has no plans of stopping bungee fitness anytime soon.

As she gets stronger, so does her mindset.

“Just going straight ahead and saying I can conquer it all. Bring it on I am right here. I am not afraid of anything,” said Harris. A no-quit attitude all so she can continue to wear her two main titles with pride, Mom and Mimi. “They are the reason I do this every day,” said Harris.