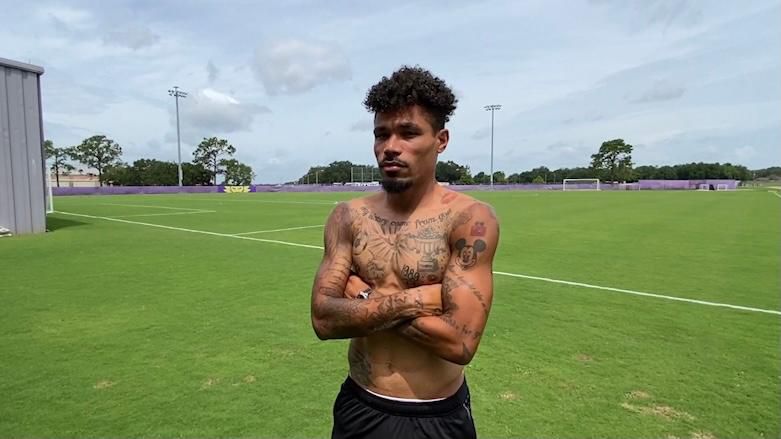 Junior Urso’s full name is Ocimar de Almeida Junior, but in Orlando he’s come to be known simply as “The Bear.”

“I think my nickname became part of my life, kind of transformed my life through the years,” The Orlando City midfielder said via translator.  “I used to have long hair, longer than I currently have, also I like to sleep a lot and the way I play.  I have an aggressive style of play; defensive and attacking.”

In just his second MLS season, the Brazilian has been embraced by the Orlando City fans.

“For me it’s incredible,” Urso said. “The fans chant and do the drums the whole game.  We see that on the field and we just try to give it back to them.”

Urso’s soccer career started in his home country of Brazil.  He played for Avai in Serie A in 2011.  He’s also played in the Chinese Super League and for Corinthians in Serie A again in 2019.  So far he enjoys his Orlando life in MLS.

When you watch Urso play you’ll notice a “hope” tattoo on the back of his neck.

“Hope means everything,” Urso said.  “There is no hope without faith.  I’m a faithful guy.”

Urso has tattoos all over his body that represent who he is and where he’s been.

“With the exception of two or three tattoos everything else has meaning behind it,” Urso said.   “Either something I struggled with or something I conquered.”

There’s an A for his last name Almeida on his wrist.  On his leg are his mother and father.  There’s also his role models Martin Luther King Junior, Nelson Mandela and his favorite players: Brazilian soccer legend Ronaldo and Russell Westbrook.

“Why Russell Westbrook?” I asked him.  In English he answered, “I love him I don’t know why. He plays so well he’s like Ronaldo he don’t stop.  He try to make his best every game.”

There’s a passion and energy to Urso’s game that Westbrook would probably appreciate.  As a midfielder his primary responsibility is making plays, but he has a knack for scoring too.  He scored 4 times in 2020 including the MLS Cup Playoffs and already has 3 this season.  He wants to add a Disney tattoo on his back to show the places he’s lived.  “The Bear’s” story in Orlando is still being written.

“I think we are on the right path.  Last year we had a good season,” Urso said.  “We managed to break that barrier, first time making the playoffs.  We want to build the history here of becoming champions.  We are working hard every day and I’m a strong believer if you work, you will achieve your goals.”