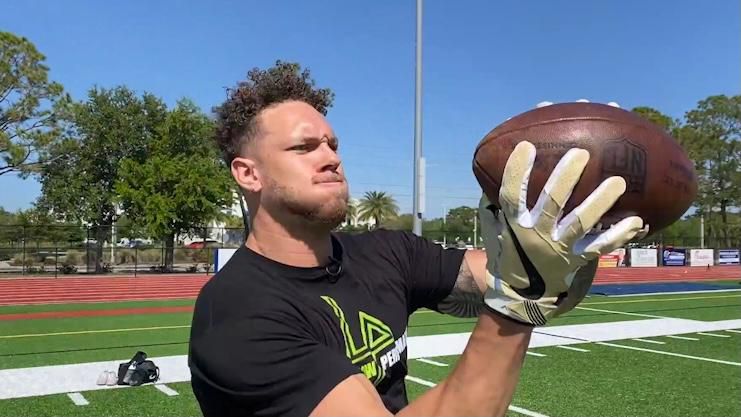 Former UCF Knight Jacob Harris, who is training for the NFL Draft at Calvary Christian High School in Clearwater, says, 'I feel like I’ve only scratched the surface of my potential in the game of football.' (Spectrum News)

CLEARWATER, Fla. — Jacob Harris takes a break from training for the NFL draft to sit down in the Calvary Christian bleachers with a smile.  An ordinary day for him right now is extraordinary for almost anyone else.

“I always pictured myself here,” Harris said when asked if his success has surprised even him.  “It definitely took a lot of determination.”


Harris is training at Calvary Christian High School in Clearwater, which isn’t too far from his hometown of Palm Harbor.  Before his pro day, he was working out at Landow Performance in Colorado.  Whatever he’s doing, it’s worked.

“Everything up there was what I needed,” Harris said. “Really prepared me for pro day.”

Harris ran a 4.39-second 40-yard dash at UCF’s pro day.  His size and speed combination has caught the eye of draft analysts like Mel Kiper Jr.  The potential is even more enticing when you realize he just started playing football his senior year of high school.

“My best friend at the time, Wyatt Wilson, convinced me that summer going into senior year to come out for a football workout one week,” Harris said.  “The minute I got out there, I just loved everything about it.”

It’s a story he’s probably told dozens of times before and he will probably tell dozens of times again.  Harris had more than 10 NCAA Division I soccer offers coming out of Palm Harbor University High School.  He even briefly committed to play soccer at Florida Gulf Coast, but after playing free safety that senior year with some additional work at wildcat quarterback, slot receiver and special teams, he earned a preferred walk-on opportunity at Western Kentucky.  He lived his dream even if it was initially short-lived.

“My aunt had recently been diagnosed with breast cancer,” Harris remembered.  “My uncle as well was in and out of the hospital with heart problems.  It was my first time being away from home and didn’t feel right.”

Harris moved back home to help his family out after redshirting the fall semester at Western Kentucky.  The decision meant a lot and still does to his mother.

“He’s always been very family-first oriented,” Renee Maloney said.  “I think, to me, it just shows his character.”

While he was helping out at home, he was also training and working multiple jobs. In between shifts as a bus boy at an Italian restaurant and an assistant manager at a sporting goods shop, he was talking to coaches at FIU, USF and UCF.  FIU and USF were experiencing coaching changes at the time. UCF was the school he really wanted to go to, but they weren’t getting back to him.  His former high school coach at Palm Harbor, Reggie Crume, was able to get his film to Scott Frost and Ryan Held, who were at UCF then.

“Coach this is low-risk, high-reward for you guys,” Crume, now the head coach at Calvary Christian High School, remembered telling the UCF staff.  “Worst-case scenario...you get a great kid in your program that's a practice body, but best case, he continues to grow and get better and becomes a huge part of your success at UCF.”

The latter proved to be right.  Harris started with the scout team, progressed to special teams and was an integral part of the offense this past year, recording 30 receptions for 539 yards and eight touchdowns.  Harris is able to use his story now as motivation for others.

“Stay humble and stay confident,” Harris said to Calvary Christian seniors Richie Ilarraza and Isaiah Washburn as they ran routes.  “You guys deserve to be there. There’s a reason these schools recruited ya’ll. They see the potential.”

“I just love being back home, seeing familiar faces,” Harris said.  “Seeing younger guys who are doing the same path as I was, these two starting college ball next year.”

He can relate to the the journey they are about to begin. In a way, his is just starting, too.  He wants any NFL team that drafts him to know the best is yet to come.

“I’ve got the tools to be great,” Harris said. “It’s just a matter of putting them together and fine-tuning. That’s something I’m going to keep working on and working my butt off to eventually get to that level of success I want to be at and know I can be at.  I feel like I’ve only scratched the surface of my potential in the game of football.”