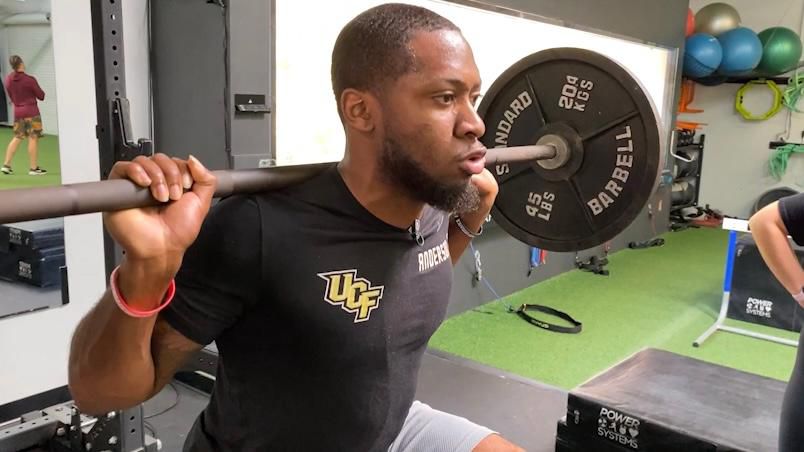 The gym isn’t even open yet and Otis Anderson Junior is already there.  As he stretches and prepares for a long morning of speed and weight training he sees messages like “The man who says he can and the man who says he can’t are both right,” written on the walls of Cooper Sports Performance in Tampa.  Anderson doesn’t need any reminders.

“People say that I’m smaller that I’m not going to be an every day down back,” Anderson says before beginning his work out.  “Honestly I just want a chance to get to the league and show what I can do."

The former UCF running back is preparing for the NFL draft.  He was 5’9 172 pounds before he started training. He’s working to add two pounds a week with a goal of reaching 190.

"Me putting on weight is just proving that I’m able to do it,” Anderson says.  “I’m going to have more bulk and I’m going to be able to run through more tackles."

Of course anyone that watched him at UCF knows size hasn’t held him back.   In college he was a big play waiting to happen.

Nicknamed “Juice” during his freshman year because of the energy his playmaking ability brought to the team, Anderson has lived up to it in every way since.

As a junior he was the teams best all purpose threat leading the team with 726 rushing yards and 9 total TD including one on special teams.  As a senior he played primarily at running back and rushed for 687 yards with 4 total TD.   He knows scouts will doubt his ability to translate to the next level, but he uses that as fuel.

“That always pushes me I always have a chip on my shoulder I always play a little angry,” Anderson says.

The Jacksonville native is used to the skeptics and hard work.  He’s been training for this moment since he was eight years old.

“The foundation that me and my dad laid,” Anderson remembers.   “The continuous summer days, where my friends are able to go to the pool and I’m working out.  I always had that extra drive and want to.”

His agent Brooks Henderson expects Anderson to get drafted in the later rounds.  A lot will depend on his performance at UCF’s pro day on April 1st.  Whenever his name is called Anderson is ready for the moment.

“That’s an experience I can only hope to feel and once I feel it I’ll never forget it,” Anderson says.  “I think I might be teary-eyed for [my parents] just seeing everything that they sacrificed paid off.”