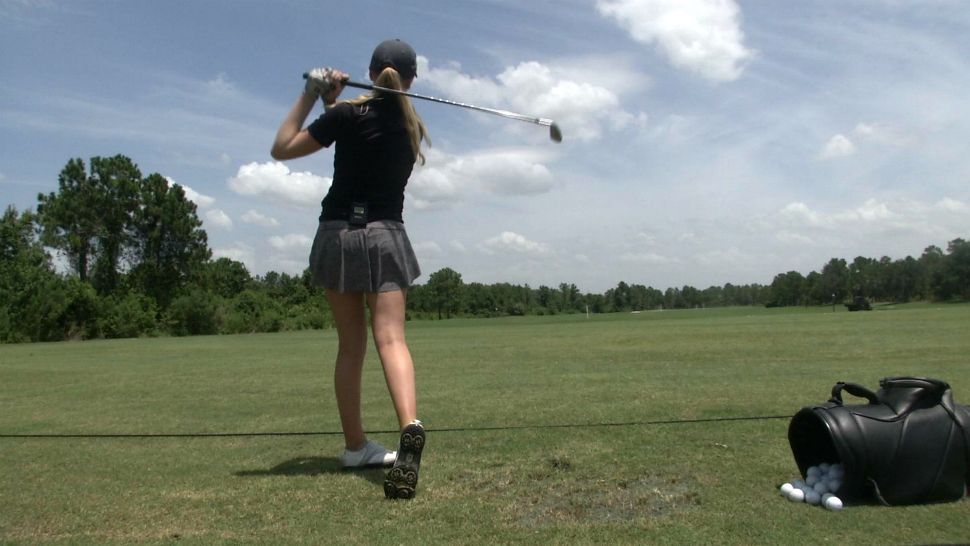 ORLANDO, Fla. — Emily Staples has a simple mentality in the middle of competition.

"Focus on what you want. Thoughts become things. And once you block out everything else around you, it’s a lot easier to stay in the moment," the 16-year-old golfer said.

Staples is currently one of the top players for Orlando's Freedom High School, committed to playing for Missouri after her senior year. That's the result of dedicating the better part of eight years to honing her craft.

"Weekends, before school started. On weekend mornings. She just had a love for the game, and it never stopped," said her mother, Jennifer.

Jennifer has worked at Golf Channel in Orlando for the duration of her daughter's life. In that time, Emily has been able to be immerse herself in the sport, which has only further built her passion.

"She was probably the most excited kid at Bring Your Child to Work Day," Jennifer Staples said. "It wasn’t about TV, it was about the actual game. She knew the game, and loved the game."

Emily already has a Florida Junior Tour championship win in her pocket from when she was 14 and is steadily working to claim her next trophy. She thinks the work she's put in at the Ritz-Carlton in Orlando is helping develop her into the player she is today.

"I think I have a really good mental game out there," she said. "I think I’m really focused when I’m out there. I don’t really let anything faze me. I really grind it out until the end."

She'll need to do just that this week, when she competes at the U.S. Girls' Junior Championship in Wisconsin. But she says she won't let the outside variables get to her in competition.

"It’s really like you’re so in the moment that you kind of forget about what’s at stake. That’s what I try to do," Emily said. "I try not to put too much pressure on myself, because then you’re not going to rise to your full potential."

Because when you love golf like she does, your potential is limitless.

"When I’m out here, I don’t really have to worry about anything," she said. "Obviously, I’m worried about how I’m playing, but that doesn’t really faze me too much. It’s really the love of golf that pushes me."