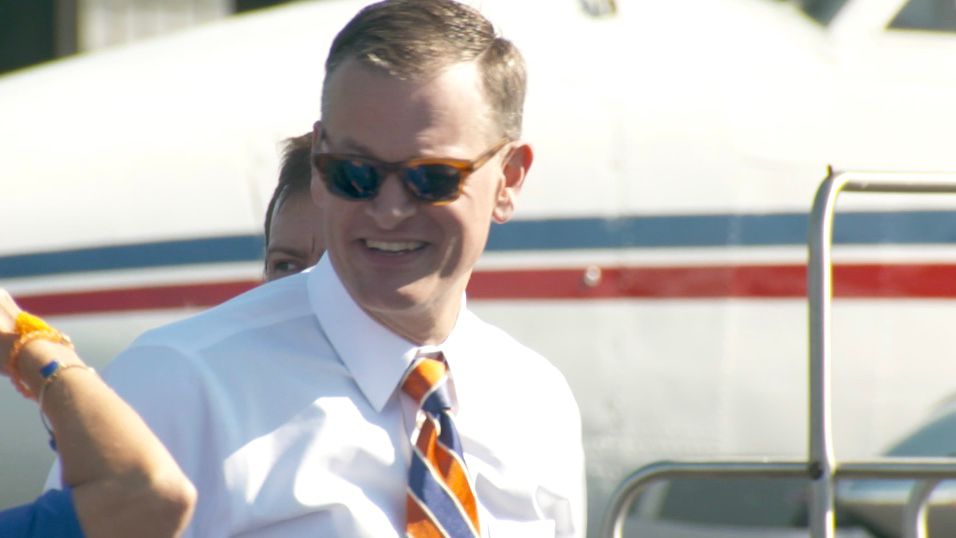 It’s a good time to be a Gator.  The University of Florida riding a stretch of eleven straight years with at least one sport to win a National Title.  The football team is back on track coming off a ten win season and a New Years Six bowl victory at the Peach Bowl.  Scott Stricklin took over as University of Florida Athletic Director in September of 2016.  His first major hire was Dan Mullen.  It’s easy to forget now he wasn’t his first choice.

“I had some unique issues there having Dan and I just been at the same school,” Stricklin said in a recent interview with Spectrum News 13’s Pat Welter.

Mullen and Stricklin worked together at Mississippi State.  Stricklin originally considered Chip Kelly and Scott Frost for the Gators job.  Stricklin admits he might have been overly compassionate to his former school.

“Candidly I was trying to be respectful of [Mississippi State] which probably affected my judgement more than it should at that point in time because Dan is obviously a perfect fit for Florida.”

Perfect fit is one way to describe Mullen’s start at Florida.  It would not be how you would describe the scheduling relationship between Florida and UCF.

“You know what we are open to anything,” Stricklin said when asked about the possibility of scheduling UCF in the future.

There has been a lot of chatter about a UCF vs. Florida matchup since an email exchange obtained by the Orlando Sentinel was published last December.  Neither side has been able to come to an agreement.  Stricklin says he’s moved on.

“The challenge with scheduling is what may be a really good model for one school has got to match with the other school,” Stricklin says.

Stricklin has said that he would do a 2 for 1 series with UCF with two games played in Gainesville.  Danny White has been adamant that he would not accept a deal unless it was home and home series and has criticized fellow group of five schools like USF for taking 2 for 1 offers.  Despite the differing philosophies Stricklin has nothing but respect for White.

“I respect anybody that’s doing what’s best for their school.  There’s no hard feelings or ill will Danny and I get along fine.  I’m very fond of the White family in general and I think Danny has done a phenomenal job.”

“It’s just not great for recruiting because you lose a home game every other year and that just comes with it.  But it certainly helps to have more home games,” Smart said.

Stricklin believes Jacksonville is still working for both sides.

“We are in Jacksonville for the next three of four years and Jacksonville has been a great home for that matchup for many, many years,” Stricklin said.  “We are always going to keep an open mind, but our hope deep down is that game will remain in Jacksonville.”

This year’s Florida Georgia game should carry even more weight than usual as both teams are expected to be College Football Playoff contenders.  Stricklin got a first hand look at the selection process as a member of the CFP committee.  He will serve again the next two years.

“It’s heartening how much time and energy the committee puts into trying to get things right,” Stricklin said.  “I understand from the outside that can be debated but inside that room everyone wants to get it right regardless of the logo on the helmet, regardless of what conference someone may be.”

Of course Stricklin had to step out of the room when Florida was brought up in discussions last season.  He looks forward to that possibility again, especially when it comes to the playoff teams.

“Obviously it’s exciting when your team is in that mix and your team is a part of that.  Also when you’re on the committee it’s a little maddening because it is radio silence,” Stricklin said.  “Nobody talks to you about your team nobody asks you where you think your team should be ranked and so you leave that room and you have no idea what the people in that room are saying about your team and you come back in and you see where they’ve placed you.”

As bright as the future looks for the Gators this offseason has had its share of problems.  Freshman quarterback Jalon Jones was accused of sexual battery twice in one night.  He has since transferred to Jackson State.  Assistant Director of Player Personnel Otis Yelverton was arrested for cyberstalking, but not charged.  Florida Athletics confirmed that he is no longer working at the school.

“Holding people in our program accountable is really critical,” Stricklin says when asked about the incidents.  “We talk about having championship experience with integrity and for us to have that integrity it involves people making good choices and when they don’t make good choices they may not be able to continue with our program or there may be consequences otherwise.  One of the things I think Dan does a great job and one of the reasons we have so much momentum is he does hold people accountable.”