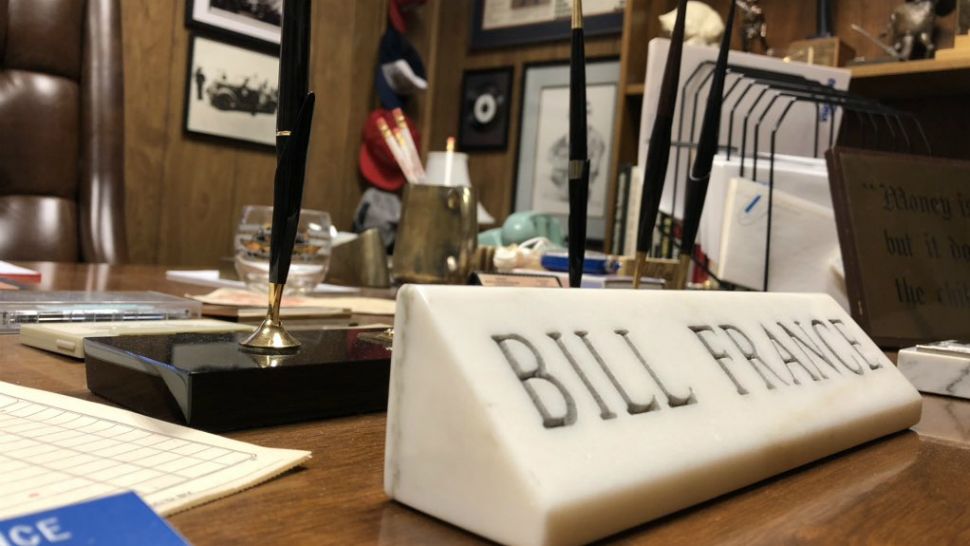 Replica of Bill Frances's office. (via Luke Hetrick's Twitter). Luke Hetrick said the recreation of the office in this building brings it all together, for the NASCAR junkies.

The Coke Zero Sugar 400 runs this weekend at Daytona International Speedway, the most historic track in the country.

Only a mile away from the Speedway, you’re bound to stumble upon this place.

At first glance it doesn’t look like much, but on the inside is what NASCAR fans would call their graceland.

“It’s got to be one of the most unique things to come in and see in all of racing,” Herb Branham said.

Branham gave Hetrick a tour of the building, proving how much there is to see.

There is a display for the Daytona 500 where Branham said they like to greet people. It even includes Buddy Baker’s 1980 Champions’ trophy.

The next stop on the tour is the library with an area called Earnhardt corner where almost everything there was donated.

“I’ve never been a fan of libraries but this one has got me psyched,” Hetrick commented.

But Branham explained that they have a special rule in the center.

“We have a rule here. We are never going to put a battery in this clock so it can stay at the only number it needs to be at,” Branham said.

The final stop of the tour saved the best attraction for last, which caught the eye of Hetrick as they moved forward.

It was an exact remake of NASCAR founder and Daytona International Speedway President Bill France Sr.’s office, the way it looked at the speedway in the 60’s and 70’s.

Hetrick took the opportunity to sit in ‘Big Bill’s chair, hoping to recreate the iconic photo of him in black in white.

Hetrick said the recreation of the office in this building brings it all together, for the NASCAR junkies.